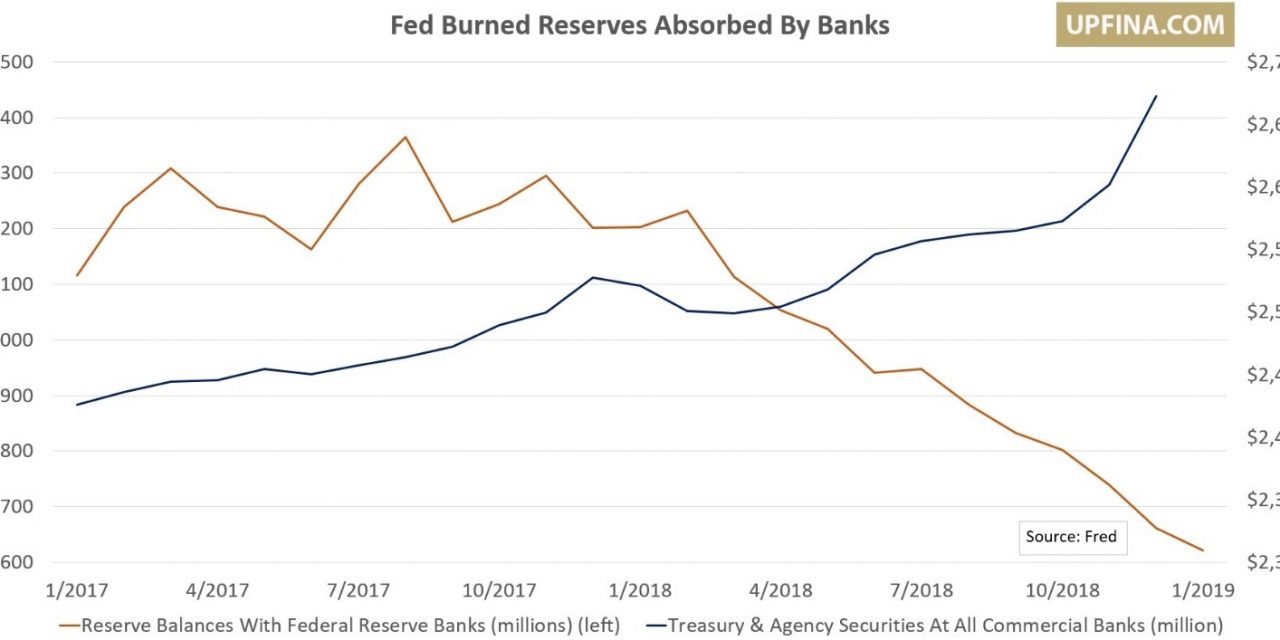 The Fed’s Minutes from its January meeting were released on February 20th. The biggest media headline from the Minutes was that the Fed plans to end the unwind of the balance sheet sometime in 2019. In fact, the number of times this statement was repeated surprised us. Based on the Fed statement, we still don’t know the pace of the QT unwind. Whether it will end in 2019 or 2020 or 2021 is still an uncertainty. Here’s why.

“Almost all participants thought that it would be desirable to announce before too long a plan to stop reducing the Federal Reserve’s asset holdings later this year. Such an announcement would provide more certainty about the process for completing the normalization of the size of the Federal Reserve’s balance sheet.”

The Fed is now working on the details of conveying the pace of the unwind. Expect those to come out within the next few months.

As the chart on the left shows, there is about $4 trillion in assets on the Fed’s balance sheet.

The chart on the right (above) shows domestic investors have offset the Fed’s and foreigners’ declines in holding share of U.S. treasuries. Clearly, there isn’t a problem with demand for treasuries because interest rates have fallen recently. The Fed’s balance sheet policy is only one aspect affecting the treasury market, so you can’t make a linear assumption of where rates will be after this new policy is enacted.

Even though the media headlines stated the Fed will end the unwind later in 2019, the Fed isn’t 100% clear about the pace of the unwind. It could simply be that the plan itself (to end QT) will be announced later this year, which is how we interpreted the statement. Currently Wall Street expects the Fed to unwind $500 billion more of its balance sheet. Of course that can be done in a myriad of ways, some ending in 2020.

This new policy is a drastic change from 2018 guidance and it’s also not a logical shift. The stock market sold off after Powell made the infamous comment that the balance sheet reduction was on ‘autopilot.’ This explains why the Fed chooses its words very carefully as the market can hang onto a seemingly innocuous word or phrase. It’s worth noting that stocks were already falling before that. Saying the balance sheet was on autopilot could be interpreted as the Fed ignoring the stock market volatility in Q4. This change in balance sheet policy is illogical because the Fed shouldn’t ignore the stock market gains during the unwind since it started in October 2017, just because a recession scare caused a brief bear market.

The Fed stated that the infamous autopilot comment made the market think the Fed was, “not fully appreciating the tightening of financial conditions and the associated downside risks to the U.S. economic outlook that had emerged since the fall.” Just because the comment made the market think this doesn’t mean a further unwind would cause stocks to crash. In the Minutes the Fed stated primary dealers have little belief that the balance sheet reduction was playing havoc with markets in Q4. It’s weird to react to the stock market if the balance sheet unwind didn’t cause the decline.

The Renaissance Macro Research chart below shows estimates of the rolling sum of catalysts of the stock market moves in the past year.

Keep in mind that these are only estimates. They show the Fed having little effect on stocks compared to trade tensions, earnings and economic data, and global growth in the last few months. It’s notable that the Fed will be specifying its expectations at the March meeting which is in 27 days. The current futures market expectation is that the Fed will guide for zero hikes in 2019.

The Fed’s rate hikes gradually work through the system. There isn’t an immediate impact. The chart below shows the cumulative estimated GDP impact if the Fed hikes this year.

Hawkish policy will have a 1.2% drag on GDP growth in 2019 if there are no rate hikes. That’s pretty large considering the drag from weak trade growth as tariffs and slowing global growth have caused global trade to grow below trend.

As you can see, 3 hikes would push that negative impact to about 1.4%. 2019 policy will have a greater variance on 2020 GDP growth as the drag will be between 0.2% and 0.7%. It’s worth mentioning that if the Fed were to hike rates 3 times in 2019, it could invert the yield curve and likely cause a recession which continues into 2020. In that case the estimate would be wrong.

As you can see in the chart below, a survey of economists expects the Fed funds rate to end the year at 2.8% which is the equivalent of 1.7 hikes this year.

Economists will follow the Fed’s guidance when it’s updated in March. If the Fed guides for zero hikes in its March meeting, the market probably won’t react because it’s already priced in. The Fed stated it will look at inflation softness, the government shutdown, and the path of fiscal policy. If the period of economic uncertainty ends, it will switch off its patience and hike rates (potentially in 2020). Patience was the term in the January Fed statement that traders harped on. It caused the post-meeting rally.

QE and QT are relatively new policies being applied on a global scale so theories need to quickly adjust to new information of the real world implications (which are not always linear in understanding). One theory is that the effects of QE and QT are proportional to spreads as these policies involve a swap of reserves for securities.

The spread was larger during QE than QT which explains why it’s possible QE had much larger effects than QT. It’s worth noting that the size of the balance sheet expansion will be much larger than the contraction. Here’s another way QE and QT are impacting markets (discussed in-depth in a recent article).

The Fed has not provided guidance on the pace of the balance sheet unwind. Many in the media are claiming it will happen in 2019, in which case the value of the securities on the balance sheet would likely end QT between $3.5 trillion and $3.75 trillion. However, in reality, we still do not know how quickly the Fed will unwind the balance sheet, which will largely depend on the economic data in the upcoming months. The Fed reacted quickly to the sharp bear market of Q4 2018. Depending on the pace of the balance sheet unwind that is determined by the Fed, it’s too early to say if it is overreacting to the stock market volatility. In any case, markets have rejoiced as the S&P 500 is less than 5% away from its record high. Based on the recent data, outside of some positive sentiment readings in February, there is little evidence that the economic slowdown is ending, which implies that the Fed needs to stay dovish. When the slowdown does end, depending on the severity, the Fed can possibly resume rate hikes in 2020.