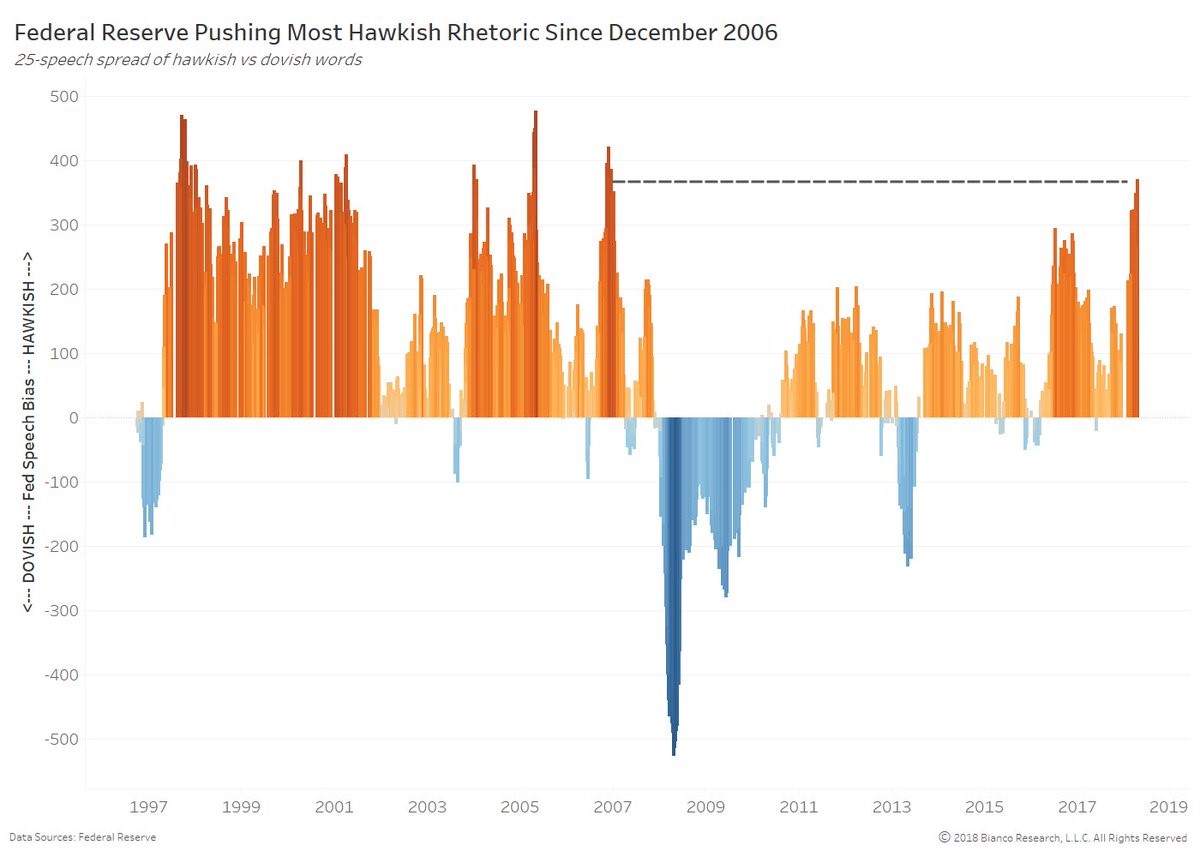 The economy is seeing a modest pickup in inflation even as GDP growth slowed to 2.3% in Q1 of 2018. That puts the Fed in a difficult position as it balances the dual mandate of having stables prices and maximum employment. One of the latest critiques of the Fed is that by raising rates after wage growth accelerates to a certain point, the Fed is defending the interests of corporations at the expense of workers. While inequality is high and corporate profit margins are high, inflation is not only driven by the labor market. Furthermore, people don’t benefit if they get nominal wage gains, but the price of goods go up so much that their real wages fall. Controlling inflation controls the value of the purchasing power of consumers. To be clear, the Fed is not the best manager of the currency’s purchasing power. 2% inflation, the stated objective of the central bank, is a 2% decline in the value of the currency, which is the opposite of price stability.

The chart below shows another measurement called the Employment Cost index. 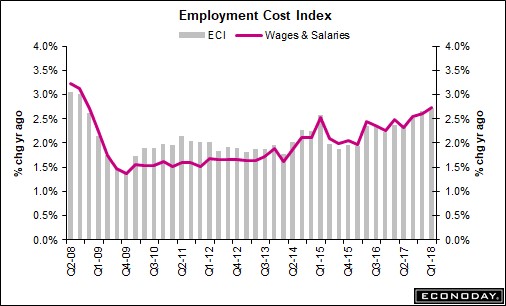 For March, this report showed 2.7% year over year growth which was an increase of one tenth from the previous month. As you can see from the chart below, this index implies the labor market is nearing its cycle peak.

Core inflation is the Fed’s primary measure of inflation. The goal is 2% core PCE inflation. In the March report, core inflation missed expectations for 2%, coming in at 1.9%. That’s still a sign of increasing inflation pressures because the previous report showed only 1.6% inflation. The Fed is worried that this bout of modest inflation pressure will be stronger than the previous ones in this expansion because the labor market is nearly filled. Although it’s not part of the core number, rising oil prices, which usually occur at the end of the business cycle, are also leading to higher economic costs.

The chart below shows the PCE deflator used in calculating real GDP. The deflator isn’t the highest of this recovery, but it’s in an uptrend. 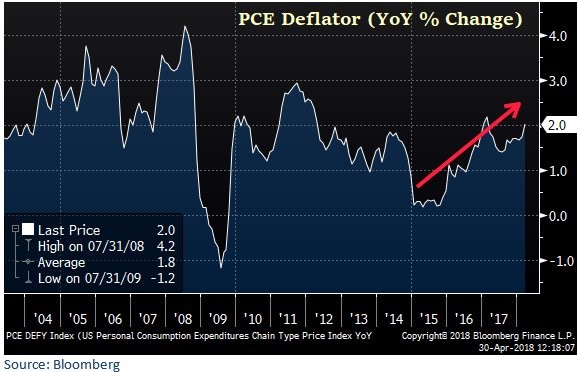 Fed Hiking Into A Weakening Economy

The economy is weakening as evidenced by the 1.1% consumer spending growth in the Q1 GDP report. That was way below the 4% growth seen in the previous quarter. The Trump tax cut may be making the Fed think the economy is stronger than it is. The tax cut is a positive to growth, but the global cyclical phase changes are more powerful. Keep in mind the tax cut, although beneficial, arrived at the end of the economic cycle, therefore it’s impact will be limited given that the economy is already in the 2nd longest expansion in history.

The chart below shows how the Fed might be too complacent about the economy.

The Fed’s rhetoric is the most hawkish since December 2006. There have been 3 prior soft periods in this economic expansion. As you can see from the blue bars, the Fed has gotten dovish during the weak periods. In this one, the Fed is going full bore with rate hikes and hawkish language as it tries to get the Fed funds rate high enough so it can cut rates sufficiently in the next recession.

Furthermore, the Fed remains on track with its plan to start unwinding the balance sheet at a $50 billion per month pace by the end of the year. This will be a significant test on global growth. If quantitative easing contributed to economic growth, as supporters argue, then the opposite would contribute to an economic contraction. This expansion has generally had less hawkish language than the previous two cycles as the Fed has been cautious about pushing too hard since growth has been very weak until recently. Now with the Fed finally becoming very hawkish, investors need to watch for the end of the cycle. The core inflation has been below the Fed’s 2% target. If core inflation gets above the target, look for even more hikes which could be enough to send the economy into a recession as we discussed in Hawkish Fed Could Force Another Recession In 2019.

The FOMC guidance is important because it moves the Fed fund futures. These futures help determine the shape of the yield curve. The latest difference between the 10 year yield and the 2 year yield is about 46 basis points which is relatively flat compared to the past 9 years of this cycle, but it’s still a normal curve. The more the Fed surprises to the hawkish side this year, the flatter the yield curve will get as the near term bond yields, like the 2 year, will see their yields spike. The latest Fed fund futures show a 47% chance of at least 4 hikes in 2018. The higher those odds go, the flatter the curve will get unless the long bond yield increases because of optimism about growth and inflation. The chart below shows a hike in May is unlikely and a hike in June is likely. A surprise hike in May or hawkish guidance could flatten the curve further. 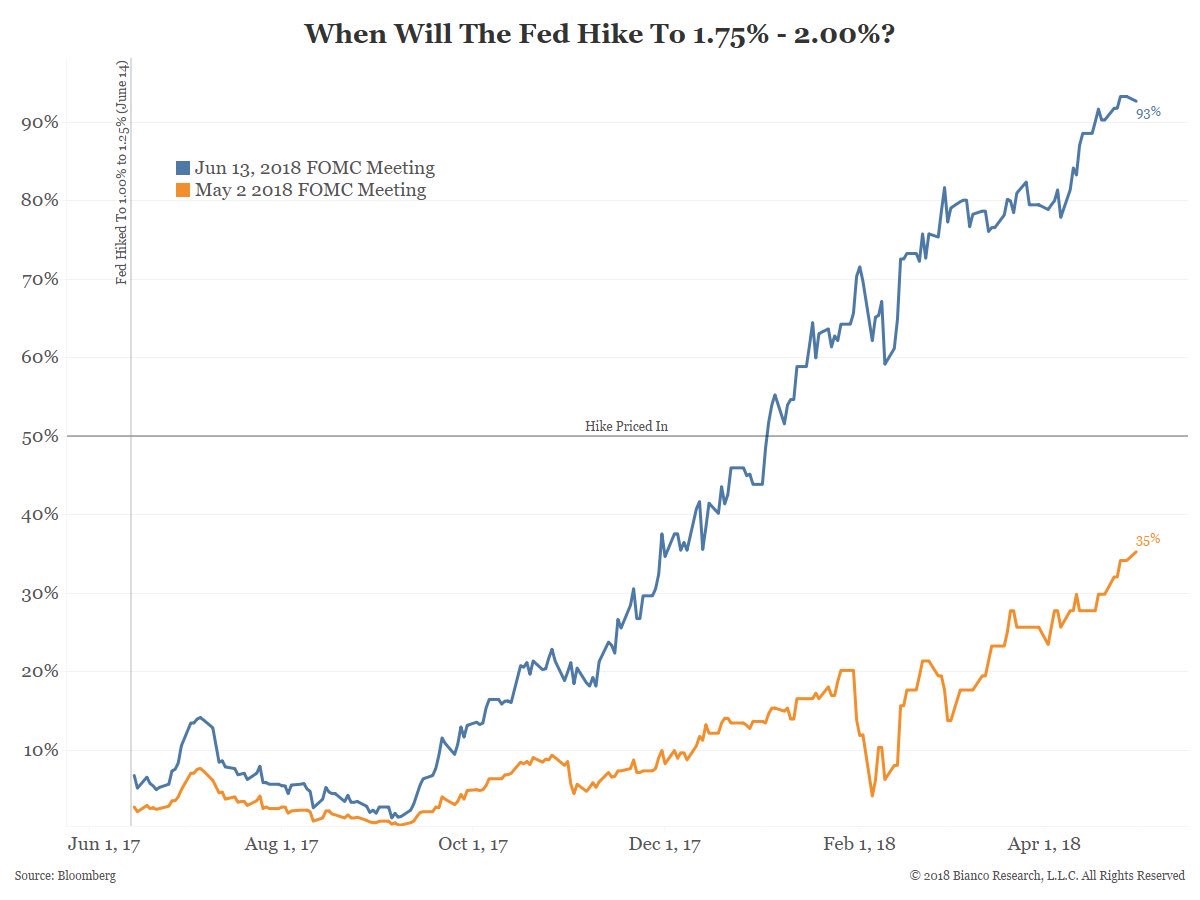 The tax cuts and modest inflation are all the excuses the Fed needs to hike rates as the economy is late in the cycle; the Fed wants to hike rates so it can cut them in the next recession. Growth isn’t very strong, so too many hikes can put the economy on a trajectory of a recession in the next year. The monthly labor report for April will give us an updated picture of the labor market letting us know how late in the cycle the economy is. High wage growth and low total job gains would be a recipe for further rate hikes, signaling the cycle is very close to ending. Here is a recent article on Low Income Wage Growth At End Of Business Cycle.