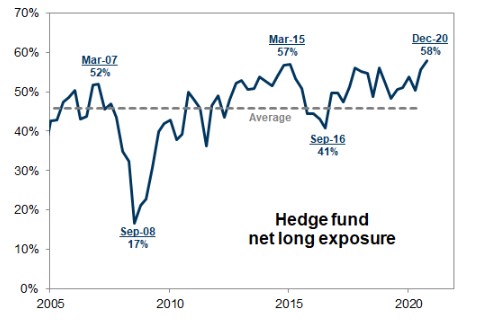 As we mentioned in a previous post, it seems the Fed needs to keep buying TIPS to keep the nominal rate from spiking. We aren’t talking about hyper inflation or rates as high as they were from the 1970s to the 1980s. However, a 4% 10 year yield would probably have a destabilizing effect on markets. That’s just a hypothetical number. We don’t know the exact rate the 10 year yield will become a problem. The Fed doesn’t want to find out when it will be an issue.

As you can see from the chart below, the Fed has now bought 23.5% of the TIPS market.

TIPS probably won’t be a good bet because as we mentioned in a previous post, CPI is being suppressed by low rent inflation. Some say the Fed is forcing the breakeven rate to increase by buying real yields. We think that’s wrong. Inflation expectations are increasing due to the recent spike in commodities prices along with the expectation for the economy to reopen. If the Fed were to stop buying real bonds, the yield would probably drift towards zero which would get the 10 year yield above 2%.

The media and the markets always like to get ahead of themselves. The calls for hyper inflation are just parroting old wrong talking points on QE combined with a timely cyclical call. Just because the long bond yield is rising, doesn’t mean it’s going to go up at the speed of a crypto asset. There is zero chance of the Fed hiking rates in 2021. The problem for some folks is they completely missed the reflation trade. Now they are overdoing it in the opposite direction. Predicting a 2% 10 year yield doesn’t get as many clicks as calling for a 10% yield especially now with the 10 year yield at 1.37%. However, it’s the best call. Peak paranoia is likely yet to come.

We think the focus on potential rate hikes and higher yields are coming to a forefront because of the speculation in some risky stocks. When those risky stocks fall, the higher 10 year yield is blamed. Of course, investors also fear rate hikes. A higher discount rate and a higher Fed funds rate are bearish for risky assets. At the same time, they are so far from reality, few growth stock DCF models have been taken seriously for months.

As we mentioned, the Fed is definitely not raising rates this year. The chart above shows the market agrees. The latest vaccine and inflation optimism have pushed the market to price in a rate hike in 2023. That’s very reasonable because the economic recovery will be swift. The Fed probably won’t talk about tighter policy at its Jackson Hole meeting this year, but rate hikes will probably be mentioned by the Fed next year. There is no question any high inflation readings are going to catalyze calls for rate hikes, but the Fed will call this price pressure transient which will be partially correct.

Bridgewater’s aggregate bubble gauge is in the 71st percentile. The table below shows the qualifications. It’s important to note that there was a bubble in 2007, but it was in housing, not stocks. In this case, we have a moderately expensive overall market with pockets of bubbles. The total market is in the somewhat frothy range, while the emerging tech group is in a clear bubble. The bubble clarification given by Bridgewater on emerging tech probably isn’t bearish enough. When it ends, there will be many pain points. It won’t be a simple 10% correction or an elongated period with little movement.

The recent stock market rally has been the fastest in 90 years. The 230 day increase is 75.6%. This is more of an extension of the prior bull run than an entire new bull market. The crash in March 2020 wasn’t a real bear market. It was similar to the almost 20% crash in the end of 2018. The current 75% start to this bull market is the best start to a bull run since 1932 when the market rose 78%. As you can see from the chart below, hedge fund net long exposure heading into the year was 58%. We’ve already shown in a previous article that the net percentage of funds taking higher than normal risk is at a record high.

The rally in stocks has created many retirement millionaires which is a good thing. Some bearish investors want the Fed to hike rates to reduce speculation in the stock market. However, that would inflict massive pain on these 600,000 millionaires. Boomers need this money to retire on. Boomers don’t necessarily have the highest weight in stocks, but they have the most in their accounts. Clearly, the recent spike seen below is the result of the bull run. Our hope is they are largely betting on the overall market instead of the speculative names. However, that’s unlikely to be the case as retail investors are taking crazy risks in names with no sales or profits to speak of.

As you can see from the chart below, other than during the 1990s tech bubble, the exuberance index has never been this high in the past 31 years.

This index is measured based on the number of companies with a greater than 10x sales multiple with a share price that has more than doubled in the past quarter. Sometimes it’s okay to buy expensive stocks, but that’s not a good idea in this market because the macro picture is probably causing more of the rise than improvements in the business.

The Fed is dominating the TIPS market, but nominal rates keep rising. We could easily see the 10 year yield get above 2% if the Fed stops buying TIPS, but it probably won’t this year. It will probably end QE sometime next year and hike rates in 2023 if the economy quickly recovers. There is a bubble in emerging tech stocks. Hedge funds are very long equities. Retirement millionaires are being minted by the tens of thousands. This is a somewhat strong market with pockets of extreme bullishness. The exuberance index is spiking. Either it will get worse for a few more months or the bubble will pop. There is no in between.