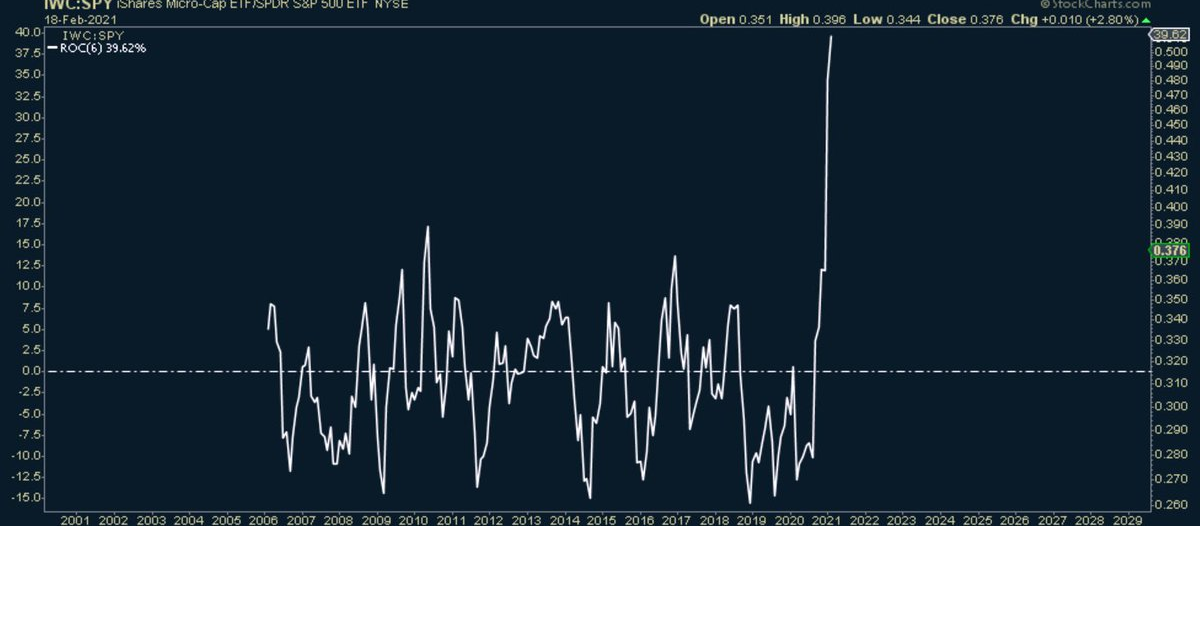 The chart below is magnificent. Industrial production fell quicker than the financial crisis. It bottomed at almost the same point. This recovery is almost 72 months ahead of the last one. Manufacturing is firing on all cylinders. Usually, hot ISM readings are bad for stocks, but in this case, there has been more room than normal for improvement.

It’s certainly arguable that getting to a full recovery is actually a bad thing for this cyclical sector. For one thing, once the economy reopens, demand for goods will fall in relation to demand for services. On the other hand, the oil and gas industry will help mining production.

Let’s look at January’s results. Monthly industrial production was up 0.9% following 1.3% growth. We knew this was going to be a good report and it didn’t disappoint. It beat the highest estimate by 2 tenths. Manufacturing production growth was 1% which rose from 0.9% and doubled estimates. The capacity to utilization rate rose from 74.9% to 75.6%. It was 76.9% before the recession and 79.6% at the peak in November 2018.

Monthly mining growth was 2.3% because energy is coming back. Utilities were down 1.2%. There will likely be a massive increase in utilities in February because of the cold weather. Yearly industrial production growth clawed all the way back to -1.8%. Next report will be the last one with tough comps. Yearly growth could easily hit double digits this spring.

Yearly manufacturing growth was -1%. We said it wouldn’t go positive until March, but if we have another good month, it might go positive even with tough comps. As you can see from the chart above, less than half of manufacturing sub-sectors are contracting. That shows the recovery is almost fully complete. The 3 month average of industries contracting is 57%. This shows how quickly the improvement has been in the past couple months.

A Step Backwards For Jobless Claims

We are on the precipice of massive job creation in the leisure and hospitality industry. Give it another few weeks before we start to see sharp improvements. That means we will see major job creation in the March or April BLS report. On the other hand, this week’s jobless claims report was quite bad. Last week’s reading was revised up 36,000 to 848,000 switching it from a good report to a bad one. This week’s reading was 861,000 which was way above the consensus of 768,000 and the highest estimate which was 822,000. Claims have changed very little since September. By staying so high, the economy needs to create a lot of jobs just to get back to even.

There was a massive 174,000 increase in PUA claims. This caused the total with NSA (non-seasonally adjusted) claims to rise 14% as you can see in the chart below. NSA claims were actually down 6,000 this week. With the major revision to seasonally adjusted claims last week, NSA and SA claims are only 1,000 apart.

As of the last week in January, the total number of people on all benefits programs fell from 19.67 million to 18.34 million. In the first week of February, continued claims fell from 4.558 million to 4.494 million. That’s a nice decline, but it doesn’t matter because of the millions of people on pandemic benefits.

Even though the pandemic is inching towards being under control, the stimulus is still needed to keep people on pandemic benefits from losing support in March. Even though the Democrats control both chambers of Congress, they are having a tough time getting something done. If they can’t get a stimulus done in a month, imagine how tough it would be for them to pass a corporate tax hike or healthcare reform.

There has been a dramatic shift in investor demands in the past few months because corporations are now flush with cash. Corporations borrowed $2.5 trillion from the bond market in 2020. S&P 500 firms have built up $1.3 trillion in cash on their balance sheets.

As you can see from the chart below, there has been a dramatic decline in shareholders wanting companies to use their cash flow to improve their balance sheets. Just 33% of investors said they most wanted to see corporations improve their balance sheets which is probably too high given most firms’ positioning. Now, 51% of investors are calling for an increase in capital spending. This should lead to a boom in investments and hiring. 2021 GDP growth is going to be very strong.

We are experiencing yet another right tail event. This time it is in speculative microcaps. The chart below shows the 6 month rate of change of the IWC microcap index versus the SPY. Markets often reach the impossible when everyone piles into a trade. This is much too crowded for it to be sustainable.

The microcap index is in a bubble. Illiquidity is helping microcaps on the way up because small purchases can have a big impact on prices. The reverse will be catastrophic. As investors run out of these speculative names, they will get terrible bids. Illiquidity is always a problem in bear markets. It will be much worse for microcaps which don’t usually trade at high volumes.

Industrial production is almost back to where it was in February which is very impressive. We might see a decline in the rate of monthly improvement as demand for goods falls when the economy reopens. On the other hand, oil and gas production (mining) will recover sharply with oil in the $60s (it’s at $59 now). Jobless claims worsened, but we are just a few weeks from massive job creation in leisure and hospitality. Investors are demanding companies invest more into their businesses and focus less on strengthening their balance sheets. The microcap index is in a bubble. This is a right tail event.