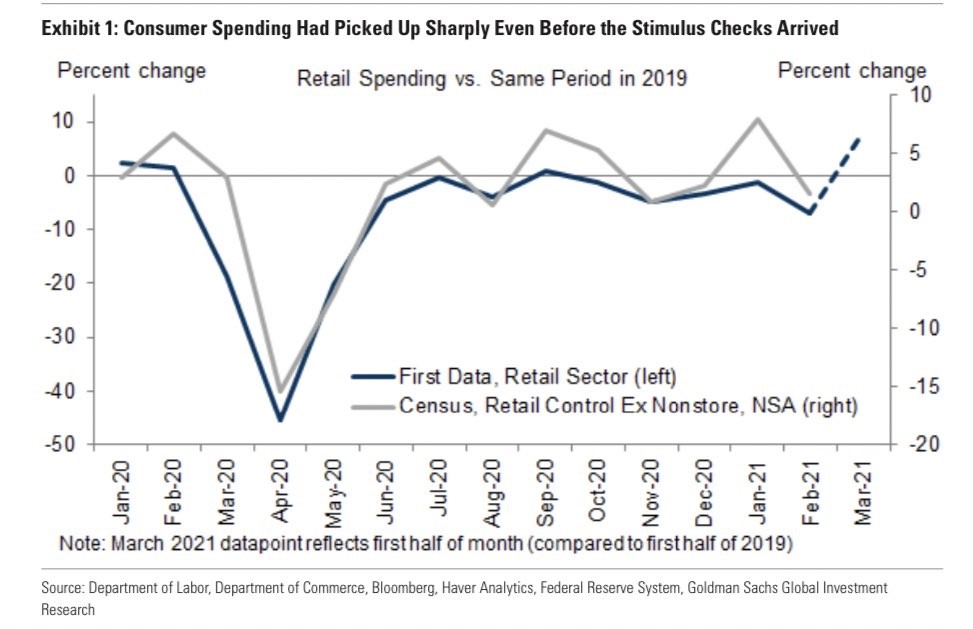 Some investors are already looking past the coming spike in economic growth. They might be biased towards secular growth stocks with recurring sales or they might want to take profits on their cyclical winners. The trade in cyclical stocks is definitely less crowded than the bubble in cloud and EV stocks was last year. That being said, you shouldn’t have expected as much euphoria in a hotel stock as an EV stock. Speculators claim EVs are the future which to them means no price is too high.

Regardless of the sentiment among equity investors, Wall Street estimates for 2021 GDP growth keep increasing and so is the 10 year yield. Goldman projects Q1 GDP growth to be 7.5%; it expects 10.5% growth in Q2. It raised its Q2 estimate by a full 1%. US GDP growth could have the highest impact on global GDP growth since 1999. We are actually partying like it’s 1999. The great data is coming very soon. The consensus for job growth in March is 625,000 jobs created. We think that’s a little too low.

As you can see from the chart below, the early data shows retail sales growth had been exploding before the stimulus checks went out. We could be looking at an extremely strong retail sales report. It will be interesting to see the results retailers report in Q1 earnings season. They should be fantastic.

One company from the Kansas City Fed survey stated, “We are seeing a significant increase in new orders. We are having a hard time ramping up staffing to meet the increase in business we are seeing.” Many economists are now claiming that because the economy isn’t generating wage inflation, there won’t be real inflation pressure this summer. That’s an incredibly bad opinion. That’s the exact opposite of what’s happening as is shown in this Kansas City survey.

Another company stated, “Low unemployment rate in our area plus lower workforce participation rate make it difficult to find workers.” This is just a few businesses in a regional Fed survey, but this is only the beginning of what is to come after the next few months of massive job creation. We could reach full employment this year.

Where Rents Will Rise

In a previous article, we mentioned that rent price growth would be the highest in the hardest hit areas. That’s why we are showing the chart below which has the hardest hit cities as of January 2021. Odessa, Texas is known for being an oil town. Once the energy cycle heats up, this area will see higher rents. We mentioned in the last article that San Francisco was rebounding sharply after being one of the hardest hit cities. Here is proof. It had a 26.9% yearly decline in rent prices as of January. That’s no longer the case though.

It only makes sense to snatch up a cheap rental if it is controlled. If it’s not controlled, after your lease, you could have a 25% increase if you are trying to bottom fish. This isn’t as fun or as rewarding as buying cheap stocks. It’s much tougher to move than it is to sell a stock. Now that the cat is out of the bag that cities aren’t dying, it will quickly get harder to find rent-controlled apartments. We are about to witness fairly high rent inflation on very easy comps. Look for CPI to show early signs of a new trend in the next reading. It will only go up from there. The Fed won’t hike rates if CPI hits 3%. That’s not part of the new plan.

High oil prices are usually the solution to high oil prices because as prices rise, production increases and demand falls. We never reached that point earlier in the year when WTI was briefly in the mid $60s. Demand is going to increase in America because consumers are ready to start flying again. In fact, American Airlines stated ticket sales are now 90% of pre-pandemic levels. This is forcing it to pull most of its idle aircrafts out of storage. This will be a mini-roaring twenties moment. Demand is set to soon get above the 2019 run rate regardless of energy prices (unless they really soar).

Supply is not ready to meet demand which creates a double catalyst for prices to increase. As you can see from the chart below, the rig count hasn’t followed prices higher as quickly as it has in the past recoveries in 2009 and 2016.

There is going to be a long term supply problem. We’ve seen investment in green energy rewarded by investors, but renewables don’t supply the majority of power yet. Oil demand will increase for years before peaking.

As you can see from the chart below, the trailing 12 month capex of the oil majors is at 2006 levels even though demand is much higher now. Capex has been low for years. It hardly recovered in the last oil recovery. The seeds for a new oil price boom have been sowed. It will take a couple years for capex to recover. It will take even longer for that to generate more supply. We need high oil prices just to get capex to start going up.

The 2021 economy is going to be a year to remember. US growth is going to impact global growth by the most since 1999. Retail sales in March will be fantastic. We will see well over a half a million jobs created in March. The regional Fed reports have been amazing in March. Demand for labor is exceeding supply. Rent inflation is about to spike this summer as people move back to cities. Demand for oil will spike, but supply won’t. This will lead to dramatically higher oil prices than we have seen this year.