Do TIPS Limit The 10 Year Yield? 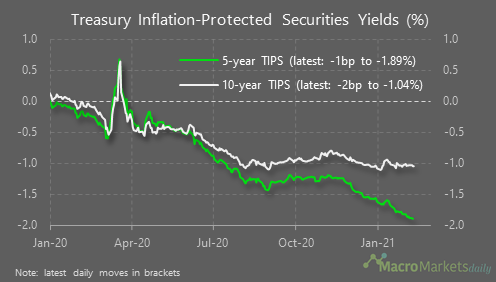 In the past few months, the nominal rate has risen because of the rise in inflation expectations, while the real rate or the TIPS (Treasury Inflation Protected Securities) has gone deeply negative. With the breakeven rate rising so much, the nominal rate would be rallying more if it wasn’t for the low TIPS yield. On the other hand, with the breakeven rate towards the high end of its historical range going back to 2003, it doesn’t seem like the nominal rate has much more room to rise if the real yield stays this low.

With the breakeven rate so much higher than the nominal rate, investors are getting a negative return for holding treasuries to maturity. Of course, you can make a profit by trading them. We think reaching a negative nominal yield is immaterial if the yield is already negative in real terms. With the rise in inflation and the decrease in corporate bond yields, their real rate has also gone negative.

As you can see from the chart below, the corporate breakeven rate is negative.

This pushes investors further out on the risk curve. On the one hand, buying an expensive stock doesn’t make much sense with higher inflation. Usually, growth does poorly with high inflation and value stocks outperform. On the other hand, with even corporate real yields negative, there is a desperate chase for positive real returns. This could be why we are seeing such speculation in markets even with rising nominal yields. Of course, the nominal treasury yield is still very low historically.

Traditionally, if we were in an environment with high breakeven inflation and very low real yields, this would be a recipe for stagflation. Of course, the current breakeven rate isn’t high compared to inflation in the 1970s and 1980s. It’s just a general perspective.

However, the TIPS market isn’t truly market based. Considering the coming economic reopening and the $1.9 trillion stimulus, expecting low real growth is a mistake. The average economist is calling for 4.5% GDP growth in 2021. This will be a great year for real growth. The TIPS market isn’t a free market at all.

As you can see from the chart below, from March 2020 to February 2021, the Fed went from owning 8.8% of the TIPS market to owning 20.55%. With such a heavy stake, the Fed is sending real yields lower. This is suppressing nominal yields. This is why we mentioned the real yield is dynamic. It’s not just a calculation. Each yield has its own marketplace. They have dynamic interplay with each other.

Some are calling for the Fed to do yield curve control (YCC). However, there is no need for YCC because the low real yield prevents the nominal yield from rising much further. Even with a record breakeven rate, the real yield can keep the nominal 10 year yield below 2%. We aren’t saying the 10 year yield can’t go higher in the near term. However, it’s tough to see the 10 year yield rising to 4% with the Fed leaning on the scale and the current tough demographics. There is no need for the Fed to control the 10 year yield at its current level. That being said, keeping such a low real yield does have consequences. Investors are running to risky assets to find any sort of real return.

The chart below shows the 10 year real yield’s daily 3 month average correlation with Bitcoin is low.

Think about it this way. Say, the real yield fell from -90 basis points to -95 basis points in one day. No one is going to use that as an excuse to buy Bitcoin that day or week. However, the fact that people in general are looking for positive real returns anywhere they can get them does impact sentiment and risk preferences. Look at how great Bitcoin has done with a negative real yield. Of course, this is only part of the story, but it does matter.

The real yield is deeply negative. In fact, the real corporate bond yield is also negative. The real yield is dynamic. It is literally the nominal rate minus the breakeven rate, but it also affects them. The Fed has been buying a lot of TIPS which suppresses the real yield. Make no mistake about it, real GDP growth will be strong in 2021. The Fed doesn’t need to control the yield curve with new policy because the low real yield is already suppressing nominal yields. Regardless of specific correlations, the low real yield is pushing investors into riskier assets such as Bitcoin. Of course, there are other factors as well. The Bitcoin bubble can pop (as an example) with real yields staying negative, but a new bubble will probably form in its place.