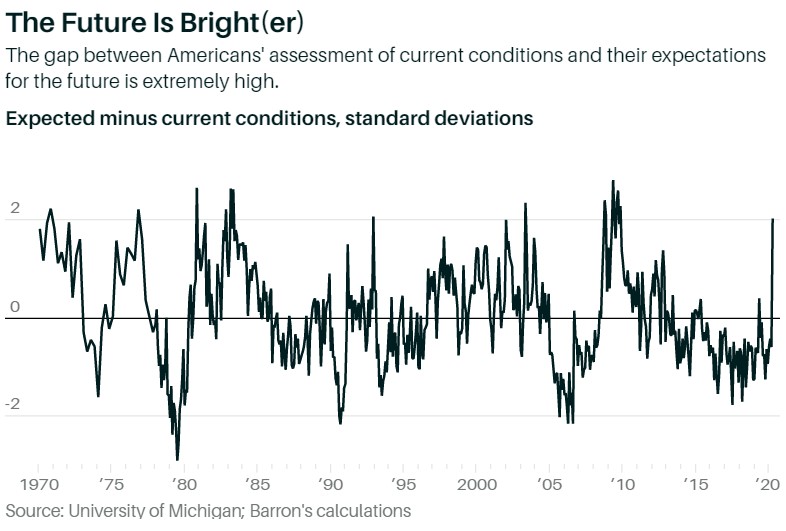 Consumer sentiment actually improved slightly in the second half of April compared to the first half. The overall University of Michigan consumer sentiment index was 0.8 higher than the preliminary reading. It rose because it was quite low in the 1st half of April and because stocks rallied sharply. Stocks and consumer sentiment tend to be correlated, with stocks leading. You can see the increase in confidence in mid-April following the stock market rally. However, at the end of April the initial spike reversed course. That’s probably because the rally in stocks slowed and consumers realized the rally wasn’t a panacea for them as millions of people still lost their jobs.

The unemployment rate is currently the highest since the Great Depression based on jobless claims. It will likely reach a new record high in the May labor report unless states reopen in the next couple weeks, creating enough jobs to counteract the weakness in the closed states. Unfortunately, that’s unlikely because the states that are reopening aren’t going back to normal (there are new restrictions) and they are smaller by population and production than the states that are closed (such as New York & New Jersey). New York is set to partially reopen manufacturing and construction upstate on May 15th which is after the cutoff date for the May BLS report.

Consumer sentiment might get worse in May before it gets better in the rest of the year. However, the index is likely closer to a bottom than a top. Just like how initial jobless claims had to fall because if they didn’t literally everyone would be unemployed in a few months, consumer sentiment won’t fall at the same pace in the next few months. It’s simply math. It would hit zero quickly. The chart below illustrates the point that the index can’t move much lower. As you can see, the current buying conditions index is near the prior recessionary trough. The probability of losing a job in the next 5 years hit a record high of 18.9%. Expected business conditions for the next 5 years hit a 6 year low. These results can’t get much worse than where they are now.

Specifically, the consumer sentiment index fell from 89.1 to 71.8 in April (versus March). That’s still a record setting decline even though it’s slightly higher than the first half of the month. Households with below median incomes expressed the same level of confidence (or lack thereof) as those with above median incomes. COVID-19 is hurting everyone. Usually, the poor are hurt more by recessions than the rich, but with the help of unemployment insurance, those making near the minimum wage are actually making more money than they would be if they were working. In April, those with above median incomes saw a 19.8 point decline in sentiment, while those with below median incomes saw a 14 point decline. The (newly unemployed) working poor are actually making more money than normally which might be why their confidence fell less.

People who are getting unemployment checks are saving more of their money than they usually would because of the current uncertainty. Plus, there are fewer ways to spend money with everything shutdown. You can’t go out to eat and buying new clothes isn’t as necessary. We think if the majority of the labor market is still in trouble by the time unemployment benefits are near their end, they will be extended. The difference between current sentiment and expected conditions fell from 22 points to 4.2 points as consumers didn’t lose much optimism from March. As you can see from the chart below, expected minus current conditions is 2 standard deviations above normal. That’s near the previous peaks since the 1970s. Optimism next month will be determined by the COVID-19 situation, how quickly states reopen their economies, and how well it goes.

This recession is being mitigated by the social safety net, government loans to businesses, the stimulus checks, the extra $600 per week in unemployment insurance, and Fed policy. There are fair criticisms of the incompleteness of this help such as the fact that many small businesses have had a tough time getting money. However, these policy actions are dramatically better than the ones in the 1930s (unemployment insurance didn’t even exist nationally until 1935 & the Fed failed to act as the lender of last resort in the early 1930s) which will hopefully allow the economy to recovery quickly. When you add in the fact that an exogenous factor caused this recession and that factor will be mitigated eventually, it’s fair to suggest this won’t be a depression. There is no formal definition of what a depression is, but we’re going with describing it as an elongated recession.

As you can see from the chart below, there have been more rate movements in the past month (i.e. cuts) than the peak of the last crisis. This is globally coordinated easing that will lessen the blow of the recession.

The Fed is meeting on April 29th. There is currently a 100% chance that the Fed won’t change interest rates from the current 0% to 0.25% range. Even still, there is some chatter about whether the Fed will cut rates to below zero because of the current unprecedented times and the recent surprising action the Fed took in buying corporate bonds. The Fed has unlimited firepower and will do whatever it takes to prevent a banking collapse. However, it won’t cut rates to below zero because it views that as counterproductive. Yellen suggested the Fed could buy corporate bonds a few days before it did. She’s suggesting the Fed won’t cut rates below zero. Therefore, it likely won’t.

Consumer sentiment has fallen sharply and might not be helped by stocks as much as usual if stocks do well in May. Stock market rallies won’t counteract people losing their jobs and getting sick. There needs to be an improvement on COVID-19 to improve confidence. The good news is consumers are relatively optimistic (in relation to current conditions historically). The Fed will provide dovish guidance on April 29th, but it won’t cut rates below zero.