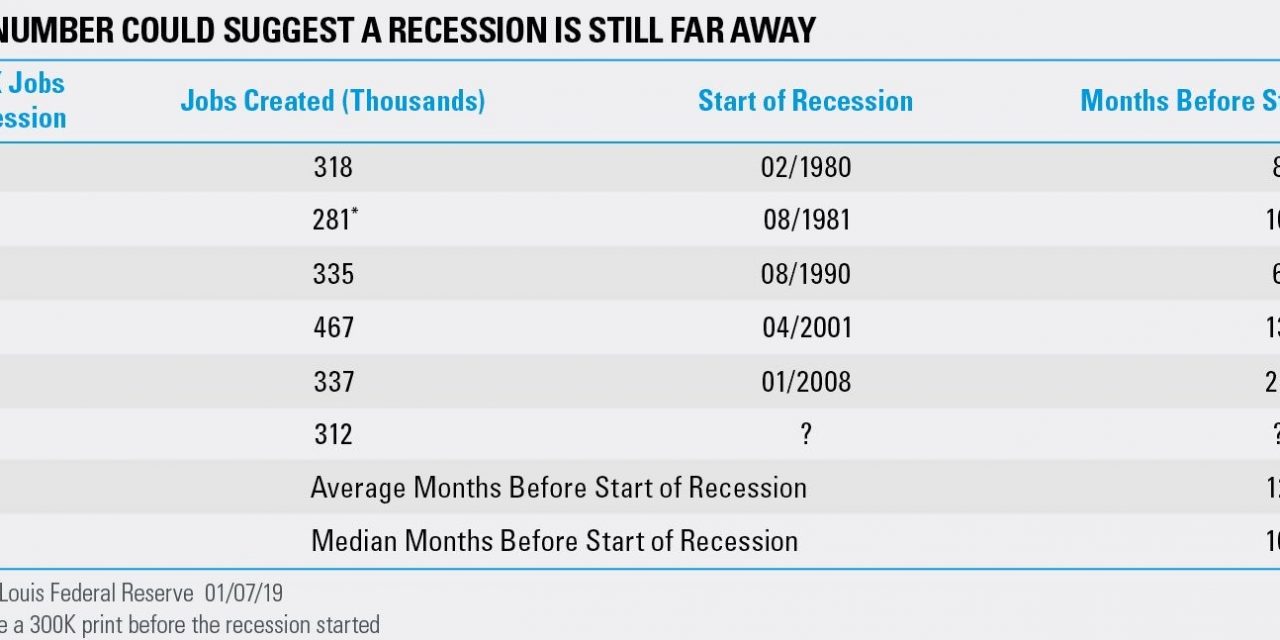 In this article we will detail the December BLS labor report, explain why it caused stocks to go up 3.43% on January 4th, and why a recession may not be coming soon. There was a panic at the end of 2018 as investors feared a recession because of the flattening yield curve, hawkish Fed, trade war with China, global economic slowdown, and negative surprises from domestic economic data. It’s possible for stocks to fall into a bear market without a recession, and very unlikely for them to not fall into a bear market when there is a recession.

The yield curve flattening and its partial inversion started the panic. The Fed’s December meeting where it stated it planned to hike rates twice in 2019 caused traders to fear that the Fed would further invert the curve. The yield curve usually forecasts a recession, but traders jumped the gun by selling before it fully inverted. As you can see from the chart below, 38% of the U.S. treasury curve has inverted and 62% of the overnight indexed swap curve has inverted.

Historically, more of U.S. treasury curve has inverted before recessions. The bad news is the percentage of the curve that is inverted usually spikes quickly. It’s also important to point out that some studies suggest that a yield curve inversion may not even happen this time (just something to consider).

One pivotal point about analyzing price action is you can’t use your technical analysis to create a fake economic narrative. Assets were pricing in a recession, but you can’t say a recession is coming unless you do research. If short term price action colors your intermediate term economic projections, you will be using circular logic which won’t help you.

No Recession Coming Yet

The December labor report was strong in every way as headline job creation beat estimates, the revisions to previous months were positive, wage growth was strong, and new people joined the labor market which pushed up the participation rate. 312,000 jobs were added which beat estimates for 184,000. This was the biggest beat since the May 2009 report which is when the economy was first exiting the recession. This was the 6th biggest beat since 1999. The prior two reports were revised to show 58,000 more jobs were added than were reported last month.

The labor market is considered a lagging indicator, but when there are huge prints with 300,000 or more jobs created, it usually means a recession isn’t coming in the near term. As you can see from the table below, the last 300,000 jobs print in the past 5 cycles averaged being 12 months before the next recession.

Obviously, if there is a future print of 300,000 jobs created, this recession date will be pushed back. If this is the last one, on average a recession will start in December 2019. We’ll discuss why the labor market isn’t full, which could suggest this won’t be the last 300,000 print of the cycle.

The unemployment rate increased from 3.7% to 3.9%. Usually it means the cycle is ending when the unemployment rate bottoms, but this increase was good news because people came back to the labor force. It’s good to see people joining the labor market because it means there is more supply of labor. If the Fed realizes there is still labor supply (slack) left, it won’t hike rates as sharply as it otherwise would.

The number of people actively looking for work increased from 6.018 million to 6.294 million. This caused the overall labor force participation rate to increase from 62.9% to 63.1%. That’s the highest rate since September 2017. If it increases one tenth more, it will be the highest since September 2013. The rate hasn’t improved this cycle because of aging demographics.

That’s why we look at the prime age labor force participation rate to measure the slack in the labor market. As you can see from the chart below, the rate increased to 82.3%.

Wage growth was strong anyway you view the data. Month over month average hourly earnings growth was 0.4% which beat estimates for 0.3% growth and last month’s reading of 0.2%. Year over year growth was 3.15% which beat estimates for 3% growth and was 2 basis points higher than November. The cycle peak was in October which had 3.17% growth. The change in the length of the work week tells us if the growth in hourly pay translated into take home pay growth. The average work week was 34.5 hours which was up from 34.4 hours, indicating worker pay was up meaningfully.

Weekly pay growth was 3.15% which was up from 2.83% in November, but down from 3.47% in October which was the cycle high. Finally, we have the best metric of the bunch. As you can see from the chart below, average production non-supervisory wage growth was 3.3% which was the highest since April 2009.

The previous cycle peak was 4.2% which implies workers still might see more wage growth before the labor cycle ends.

Interestingly, the latest increase in prime age employment is coming for those not in the labor force who don’t want a job. In the past 3 years, the prime age employment rate increased 2.3%. 0.4% of that increase came from those who want a job now. Those who don’t want a job now are where the labor supply is coming from. People may get a job when they don’t want one because of wage growth or because training is being offered to those without skills because the labor market is tight.

The labor market is tightening, but it’s still not full. This should cause the Fed to slow its rate hikes since one of it’s mandates is “maximum employment” and the labor market seems to be suggesting continued supply of labor. There is still room for the labor market to grow for potentially a few more years if the Fed doesn’t catalyze a recession with tight policy. If the latest 300,000+ jobs report holds up after revisions, it signals a recession probably won’t occur in the next 12 months.