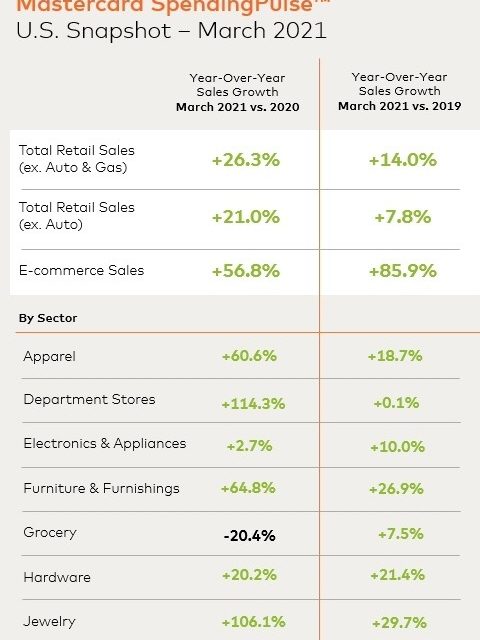 Next Thursday we will get the March retail sales report. A good reading is largely priced in based on the amazing alternative data we have witnessed. Merrill Lynch expects 11% monthly ex-autos sales growth. Redbook same store sales growth in the week of April 3rd was 10.6% which was up from 9.8% the week before. This bump wasn’t just catalyzed by the stimulus. It is being supported by the economic reopening which is now well underway.

The 7 day average of daily deaths from the virus has fallen to 783 on April 8th. America is speeding towards being fully vaccinated. At the current pace, 75% of Americans will be vaccinated in 3 months. It looks like June or July will be when we reach that point. Investors are much more concerned about Europe and emerging markets such as India. It’s taken as a given that the virus will be vanquished this summer in America.

The table below shows Bank of America card spending growth in a few major categories in the past 6 months.

Airlines had a 37.5% sequential increase in spending in March which followed 17.8% growth in February. Airline spending is on fire. Leisure trips are exploding. Once business trips recover in the next few months, airlines will face the biggest bump in demand ever. Restaurants are doing extremely well now that most restrictions are gone. In NYC, there is still an 11 PM curfew. If politicians are smart, all restrictions will be gone by May.

Lodging spending growth was 15.8% sequentially. Growth has been in the double digits for three straight months. April should be even stronger. Spending on furniture was up 15%. People are still upgrading their living spaces. Furthermore, spending on furnishing hotels and offices should spike as people get back to the office and go on trips. We aren’t sure if this type of furniture spending is included in this data. Most large corporations haven’t brought workers back to the office. They are waiting until most of their employees are vaccinated which should come in 1-2 months depending on the company.

On the one hand, home improvements should fall because people will spend less time in their homes quarantining. On the other hand, the housing market is still on fire. Monthly home improvement spending growth was 11.5% in March. Clothing spending growth was 17.4% because people need new outfits for their in-person gatherings which have already started in earnest in most of the country.

Besides Bank of America Card data, we also have spending data from Mastercard. The spending pulse snapshot from March shows retail sales were up 14% from 2019 excluding auto and gas. Sales growth excluding auto was 7.8%. It’s completely useless to review overall yearly spending growth because the 2nd half of March 2020 was hurt by the pandemic.

Amazingly, even though the economy is partially reopened, e-commerce sales growth was 56.8% yearly. The e-commerce comps are about to get tougher. The 85.9% sales growth since 2019 shows how far the consumer has come. This has been a major habit change that won’t completely revert back. Growth by sector is similar to the Bank of America data. As you can see, apparel, furniture, and jewelry were strong, while grocery and electronic spending growth were weak.

As we mentioned a few days ago, Biden’s plan will be light on defense spending and heavy on housing & community service, public order & safety, and general public service. The pie chart below categorizes the details of his plan. The labels are slightly different, but the message is the same.

As you can see, 29% will be spent on transportation. This includes roads and bridges. There are also talks to build a high speed rail network, but that would probably be a mistake because American cities are much more spread out than they are in Japan and Europe. Other spending will be on green energy like solar and electric vehicles. It’s interesting to see how the EV stocks have plummeted in the past few weeks in spite of potential federal help. The hype got too heated from November through January.

Duration Trade Is Not Gone

In the past few weeks, the trend that started in early November has corrected. Long term interest rates have fallen and tech stocks have done well. The Nasdaq 100 is at its record high. The 10 year yield fell from almost 1.78% to 1.63%. Oil prices fell to the high $50s. The ratio of the Nasdaq to the S&P 500 has risen again. However, it’s important to understand that a few weeks of a trend correction doesn’t mean the long term trend has changed. It’s not time to load the boat on growth tech stocks and short energy stocks, depending on your time horizon of course. As you can see from the chart below, the duration trade is a mega trend that is just starting to unwind. The 10 year yield has likely not peaked for the year. Look for it to get to 2% soon.

Interestingly, as part of this trade in the past few weeks the stay at home stocks have been beating the leave your home stocks. That’s despite the amazing vaccine news. There are some worries about emerging markets, but that’s all short-term. Vaccines will be distributed to the rest of the world at a higher clip once America is fully vaccinated. We are expecting America to spearhead the global vaccination effort starting this summer. Vaccination rates will accelerate. India will not be left behind. As of April 8th, 6% of the country had at least 1 dose and 0.9% were fully vaccinated. The speed of vaccination will increase in the next few months.

The March retail sales report will be one for the ages. It will be fantastic. It’s interesting to see how strong e-commerce spending will be even as the economy reopens. Biden’s infrastructure plan calls for a lot of money to be spent on transportation. The short duration trade took a breather, but that doesn’t mean it’s over. The stay at home stocks have done well even though the pandemic is under control in America.