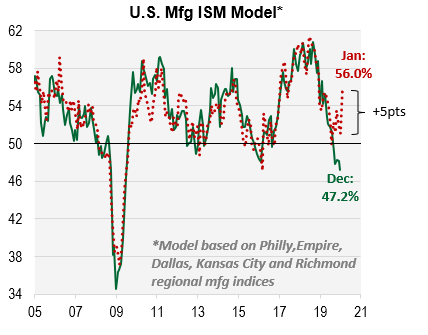 Cornerstone Macro has created a new metric called consumer free cash flow. It shows consumers have a high amount of money to spend on discretionary purchases which is good for the economy. This is in line with the strong consumer sentiment index we will review next. The great part about the consumer free cash flow calculation is we have it laid out in the set of charts below. It is calculated by subtracting the amount of money consumers have after taxes, food, and energy by their cost of debt servicing.

The amount of money consumers have left over after taxes, food, and energy is overall PCE divided by PCE excluding food and energy. That’s currently high compared to the past 3 decades. Energy spending as a percentage of PCE is near a record low. Consumers’ debt servicing is very low because consumers have deleveraged and interest rates are low. The savings rate is 7.9% (November). This leads us with the historically and cyclically strong consumer free cash flow index shown in the bottom chart below.

Consumers saying current conditions are good increased from 39% to 40.8%. Those saying conditions are bad fell from 11.1% to 10.4%. As you can see from the chart above, consumers have become even more confident in the current job market. Those saying jobs are “plentiful” rose from 46.5% to 49% and those saying jobs are “hard to get” fell from 13% to 11.6%. The net difference rose to 37.4%. Consumers’ outlook on the labor market also improved. The percentage expecting more jobs in the next few months rose from 15.5% to 17.2% and the percentage expecting fewer jobs fell from 13.9% to 13.4%. The net percentage improved from 1.6% to 3.8%.

The December durable goods orders report was weak as it signaled there will be weak business investment growth in Q4. The good news is the regional Fed manufacturing reports average capex index has improved (highest since July 2019). That signals business investment growth could improve in January. Monthly headline durable goods orders growth was 2.4% which beat estimates for 0.5%. Despite this strong growth rate, this report was weak because airline orders boosted growth and monthly growth had an easy comp. November new orders growth was revised down from -2% to -3.1% (comp got easier).

As you can see from the chart above, headline durable goods orders fell 3.7% yearly. That was up from -4.8%. However, the comp got easier by 1.7%, so the 2 year growth stack fell 0.6%. The January yearly comp will be tough, but the rest of the year will have easy comps. Ex-transportation monthly growth was -0.1% which missed estimates by 3 tenths even though November growth was only -0.4% (down from 0%).

Core capital goods orders fell 0.9% monthly which missed estimates for 0.2% and the low end of the estimate range which was 0.1%. The comp was a very manageable 0.1%. Yearly growth was 0.8%. Yearly non-defense capital goods orders growth excluding aircraft was 1% which increased from 0.3%. That’s the highest growth since May. The comp got much easier. Last year, growth fell from 6.1% to 1.9%. Therefore, the 2 year growth stack fell from 6.4% to just 2.9%.

It’s impressive that both the Kansas City and Richmond Fed indexes increased since they have exposure to Boeing’s supply chain. The Richmond Fed index and the Philly Fed index drove the regional Fed average higher. The Richmond index rose from -5 to 20. It more than doubled the highest estimate which was 9. It beat the consensus of -3, making this the largest beat since March 2009. The shipments index rose from -6 to 29 and the volume of new orders index rose 26 points to 13. The backlog of new orders index rose 20 points to 9 and the local business conditions index was up 22 points to 16. The capex index was up 3 points to 15.

These regional Fed indexes imply the manufacturing recession is almost over. Remember, if the ISM PMI gets above 50, that’s bad for equity returns. 6 month expectations in the Richmond Fed report were also strong. Shipments were up 3 points to 41 and volume of new orders were up 8 points to 37. Local business conditions fell 13 points to 14 and capex was rose 1 point to 5.

Consumers have high free cash flow according to Cornerstone Macro’s calculation. Let’s see if the January retail sales report shows higher growth. The consumer confidence report agrees with that assessment of the consumer. On Friday, the December PCE report is expected to show 0.3% month personal income and consumption growth. The December retail sales report was decent, but unspectacular. It’s no surprise durable goods orders were weak in December since there is expected to be weak business investment growth in Q4. The Q4 GDP report comes out Thursday. The regional Fed reports imply the ISM PMI will rise to 56, but it has been below what they have expected in recent months.