Are Companies About To Blame Hurricanes For Poor Earnings? 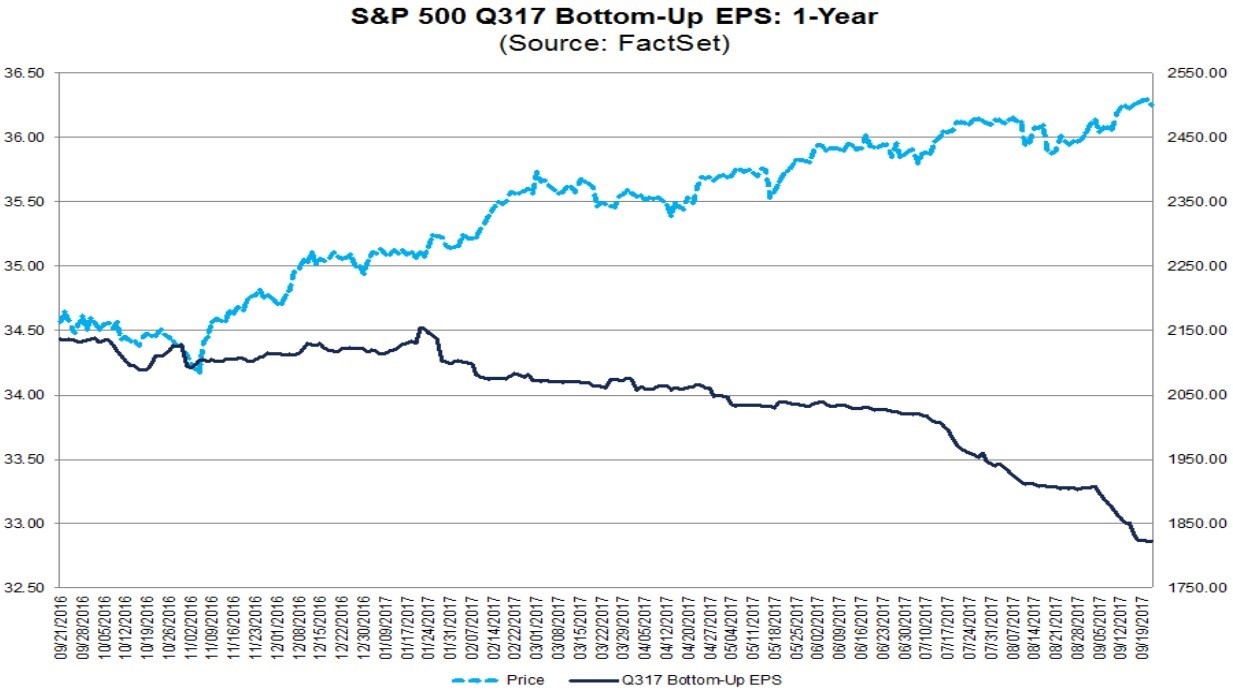 Skeptics will say earning growth doesn’t matter because the earnings recession didn’t end the bull market. However, it did stall the rally and create the scenario where there were two corrections. The market is now in much better shape as the S&P 500 has rallied double digits and there hasn’t been a 3% correction this year. You can make the case that stocks didn’t fall enough in 2015 and 2016, but you can’t say stocks did better in that period compared to now.

It’s also pivotal to mention that calling stocks expensive on a trailing twelve month basis is like saying Apple is cheap because it has a lot of cash; both are ridiculous. You can’t make a bet on equity or the market based on information that is known by everyone. There’s no alpha gained from looking at widely dispersed information. You need an edge. For Apple, an edge would be an opinion based on facts which explains why the future earnings consensus is wrong. For the stock market, you need to have a well-researched opinion on why future earnings will beat or miss what the market has priced in.

While it might be obvious to say that future earnings determine where the equity market is going, it’s very common for bears to show how stocks have rallied in the past 3 years while the market is just getting back to the cycle peak in earnings. This argument has been wrong for over a year. The reason why these inaccurate arguments are made is because they don’t require rigor. If clicks can be obtained from doing little research, it’s make sense to be lazy. These purveyors of articles without rigor probably don’t invest based on their own ideas; neither should you.

The subsequent numbers we will use are from FactSet, so they are different from S&P Dow Jones. The latest earnings trend can be seen in the chart below. The Q3 bottom up S&P 500 expectations have been crashing in the past few weeks which is a much different scenario than Q1 and Q2. In fact, only 4.2% year over year growth is expected which is a large decline from the 10.3% growth in Q2 and the 11.1% growth rate expected in Q4. Q3 appears to be a black hole for earnings growth.

Q3 Bottom Up Estimates Have Fallen

What makes this situation weird besides the fact that it’s a big drop off in growth is that the earnings pre-announcements have been positive. The chart below is in stark contrast to the Q3 estimate bloodbath. 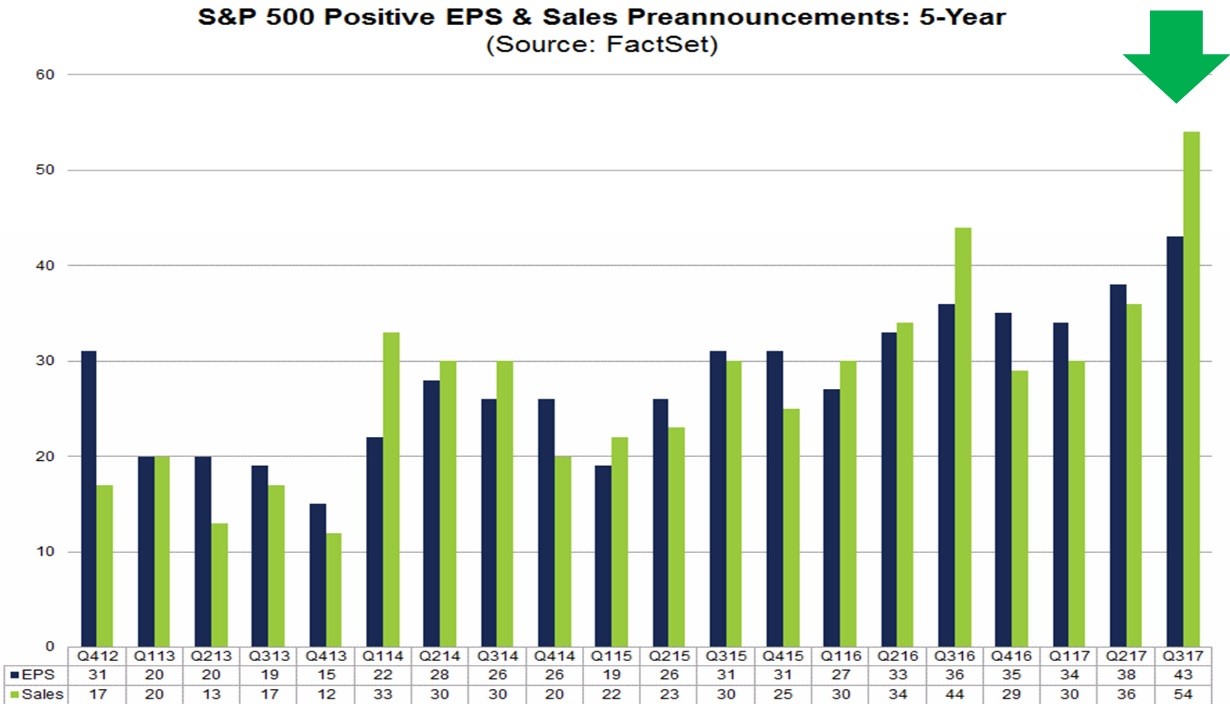 There have been 43 positive earnings preannouncements and 54 positive sales preannouncements. The 54 positive sales preannouncements are the highest total since FactSet started calculating the data in 2006. Earnings growth has been driven by sales growth, the weak dollar, growth in Asia and China, and impacts from acquisitions. The 5 year average for positive earnings guidance is 27 which means Q3 is well above average. There have been 75 firms providing negative guidance. Although that seems high, that’s below the 5 year average of 79. The firms leading the charge of great sales guidance are mostly in the tech sector. The consumer discretionary and healthcare names are also doing well above average.

To summarize, earnings estimates have crashed in the midst of a period were guidance has been record breaking. The question is how that is possible. The follow up is if this negative catalyst is temporary or a new trend in earnings. One potential answer as to why earnings estimates have fallen off a cliff is the two hurricanes that made landfall this quarter: hurricane Harvey in late August in Texas and hurricane Irma in early September in Florida.

Hurricane Issues Could Be The Cause Of Estimate Declines

What makes this situation particularly interesting is that the hurricanes occurred in the period after the majority of preannouncements usually take place. On average, only 6 firms report guidance for Q3 in September. This year 4 firms have preannounced in September (6 since August 25th which was when Harvey hit). Three of the firms mentioned the hurricanes, but two firms said it was too early to tell what the impact would be. As you can see, analysts are in the dark as to what impact the hurricanes had on any of the businesses. The hurricanes are catalyzing earnings estimate cuts, but there’s not much of a guideline. This means there’s a chance earnings have been cut too much or not enough. That could cause some volatility early in the season, but it shouldn’t cause major disruptions because investors will know this is a one time event. If the hurricanes are the main reason earnings estimates fell, there should be a rebound in Q4.

To get an idea of the scope of the effect on businesses we will give you a quote taken form a nonmetallic mineral product manufacturing company in Texas. This quote has been taken from the Dallas Fed’s manufacturing report. Management said:

“We lost approximately seven days of production due to Hurricane Harvey. We are fully back online.”

Hopefully this article gave you an idea of what is coming in the Q3 earnings season which will get underway in late October. Temporary slowness shouldn’t be a problem. However, keep an eye out for firms blaming the hurricane for secular issues. Blaming the weather is typically an excuse for firms which are screwing up. Now that the weather issues are more believable, some firms will jump on the bandwagon and blame the hurricanes for everything. Be careful to not be fooled by these companies that can come up with creative excuses for why they missed estimates, but can’t come up with solutions to turn their business around.