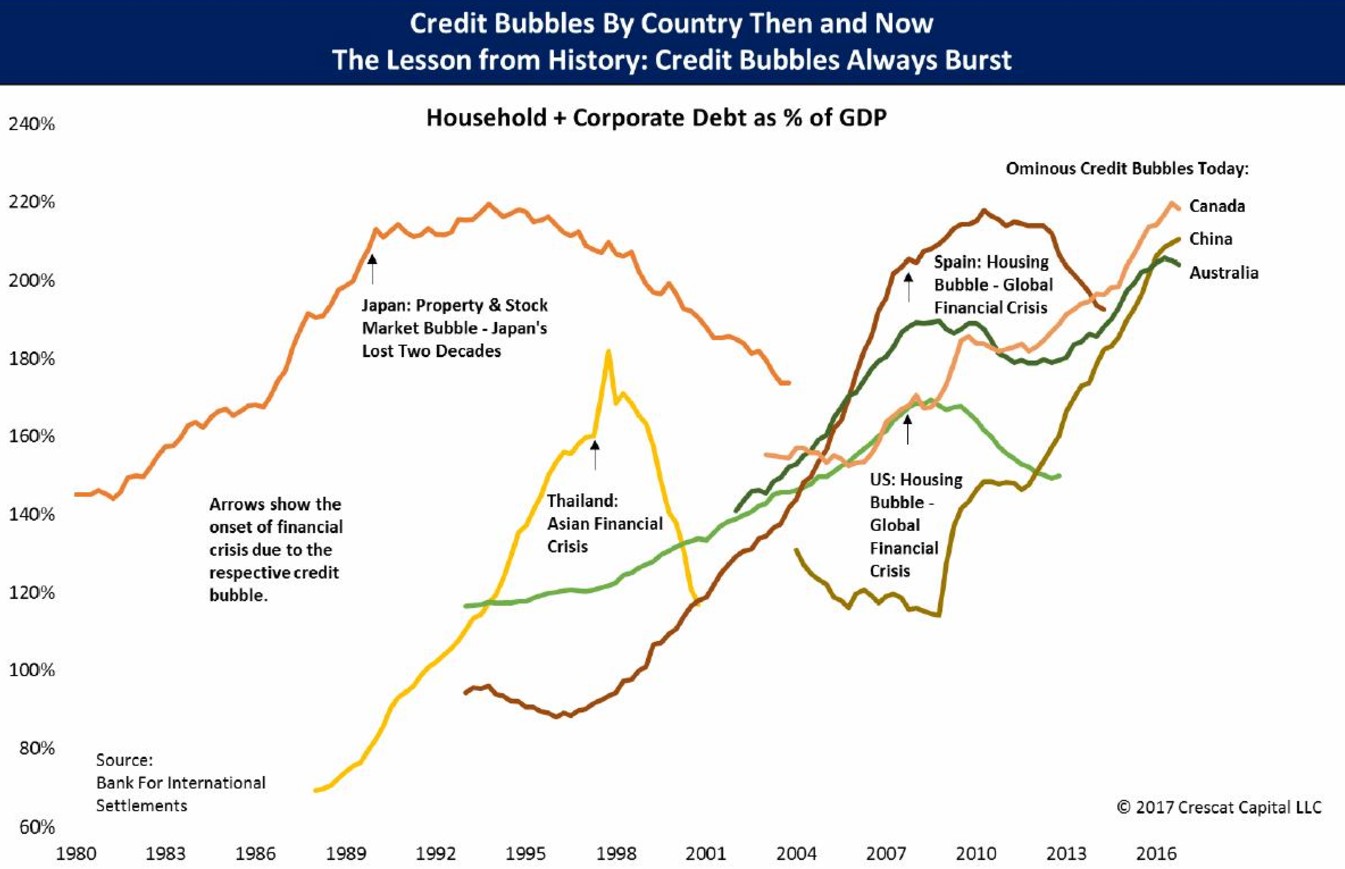 For U.S. based investors witnessing the great stock performance domestically in 2017 it’s easy to overlook events abroad. The emerging markets have actually been more than doubling US performance year-to-date (YTD) as the MSCI Emerging Markets index is up 25.49%. If the year ended on July 31st, this would be the best yearly performance since 2009 where the index rose 78.51%. You can see the recent performance in the chart below as the index has gone vertical in the past few months after experiencing a sharp decline in 2016 due to the weakness in commodities. We’ll review the trends which have been powering the emerging markets and include a discussion on whether they can continue.

Emerging Markets Are On A Big Winning Streak

One major catalyst for emerging markets is that President Trump hasn’t followed through on his protectionist rhetoric where he promised to annul trade agreements. This resulted in significant concern for emerging market economies, whose growth relies on exports to America. Trump’s toughest rhetoric during the campaign was against China, so without protectionist policy against them other countries are probably in the clear as his rhetoric was mainly bluster.

Another positive tailwind for emerging markets equities is the disinflation trend. The new trend isn’t exclusive to America as lower inflation is stemming from weakness in commodity prices. The lower the inflation, the higher the future value of cashflows which means multiples can come up. We’re in a brief period of nirvana for global stocks as growth is improving and inflation is moderate. This has caused almost every market to see increases in equity values. The few countries not participating in the rally this year are Canada, Pakistan, Ireland, and Russia. With emerging markets rallying, there is some retail capital chasing these high returns. The weakening dollar can augment these returns further. 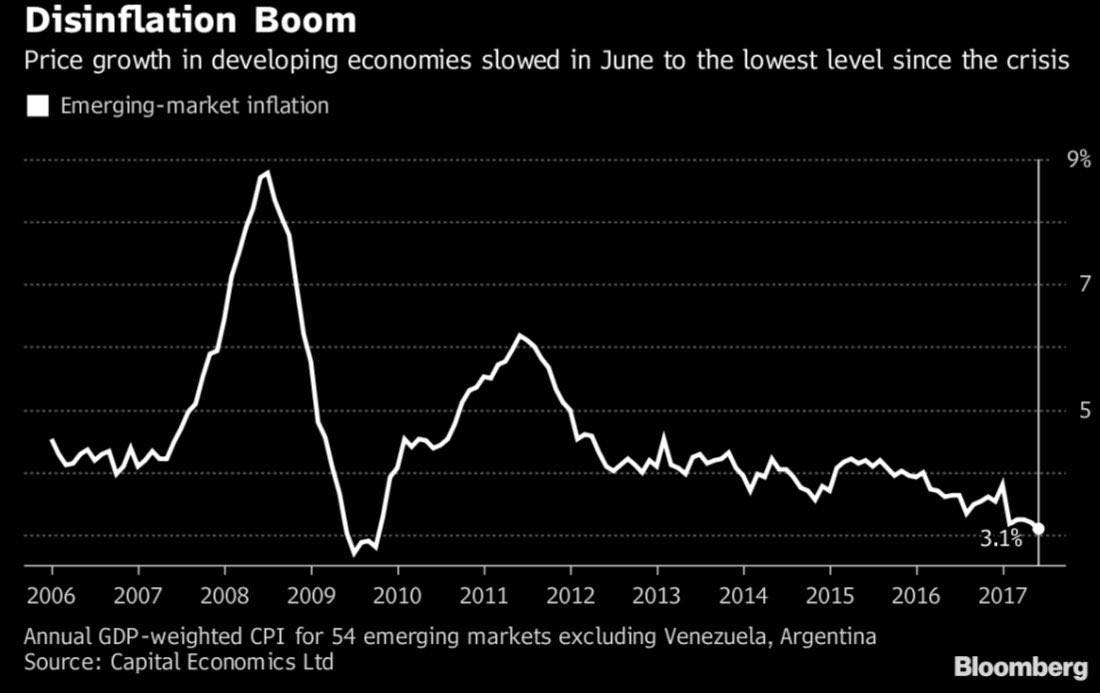 Typically, emerging markets such as Brazil and Russia are leveraged to commodity prices. This rally has occurred despite the weakness in commodities. The rally has been caused by the increase in volumes which are making up for the price declines. The chart below shows the improvement in the container throughput index and world trade volume. In late- 2016, many were fearing a rise in protectionism because of Trump and Brexit being construed as anti-trade. The reverse happened. This upside surprised certainly gives more momentum to the emerging markets trade. Eventually this increase in trade will heat up inflation as commodity prices rise. That could be another catalyst to the emerging market trade in 2018. After that happens, there will be a selloff to follow as central banks start to clamp down by raising rates. That bullish runway doesn’t mean all emerging markets are a win. The biggest wild card is probably Brazil which has had political issues. 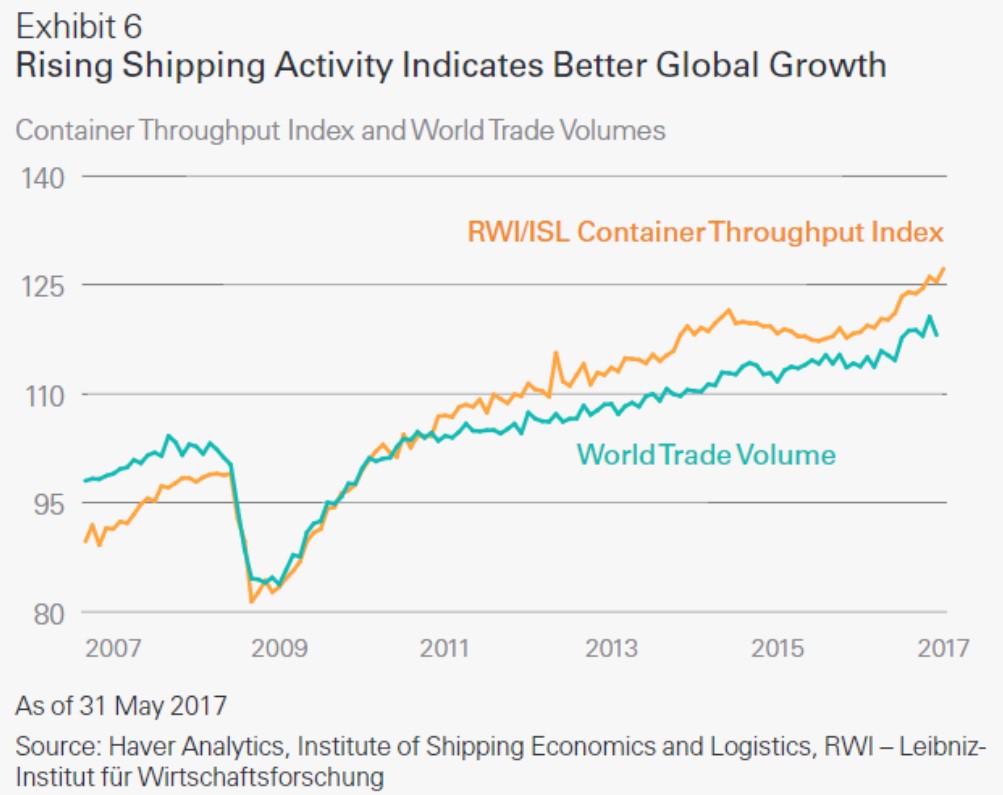 Increased Trade And Shipping Despite Fears Of Protectionism

The improvement in emerging markets performance has stemmed from the improvement in sales and earnings growth which has followed an earnings recession much like what occurred in the US. Emerging markets are cheap relative to the United States, which is normal. They have a 12.6 forward PE which is above 10.9, the 15-year average PE. A higher than average multiple is to be expected with the low inflation rate. Much like in the US, the tech sector is leading the charge higher. As of the end of June, emerging market tech was up 35.1%. That’s not a lot when you consider the expected earnings growth of 32.4% and the 14.7 PE. Much of tech is driven by advertising spending; the improving economy spurs spending on ads. Don’t be tricked into thinking these tech stocks are impenetrable to the vacillations of the economy. During the tech bubble, bullish investors said they would go up forever and the same was said for commodity firms reliant on China in the 2000s. Sometimes it’s possible for firms to have steady earnings growth, but when speculation heats up, even good companies can see their stocks rise and fall sharply.

Let’s go through two concurrent trends which will affect future returns in emerging markets over the next 3-5 years. On the bullish side of the ledger, China is investing $1 trillion in infrastructure spending to build out trade networks. This program, announced in 2013, is called the One Belt One Road initiative. As you can see in the image below, the trading initiative aims to connect China with Europe, southeast Asia, and Africa through land based trading passageways and maritime routes. China wants to develop more of a presence in the international trading sphere since it isn’t a part of the G7 group. By developing other nations in the process, China builds up the emerging markets, creating a shift in the global balance of economic power. It’s not a bad idea to push investments to growing trade since China has built up vacant cities in the past which is a bad use of capital. This could be similar to the American rails which improved productivity in the mid-1800s. Another advantage is this trade network will strengthen the current regional weakness in the southern and eastern parts of China. 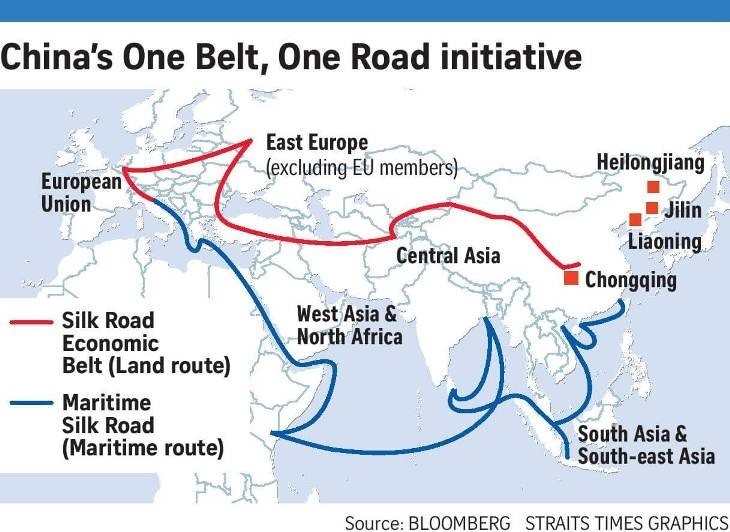 Despite the forward looking infrastructure investments, a lot of this capital has been malinvested in the form of empty cities rivaling the size of New York. This had led to a massive debt burden for the country. As you can see in the chart below, China has a high corporate plus household debt to GDP ratio.

In a relatively short amount of time China has accumulated a remarkable amount of debt. While the One Belt One Road initiative is promising when viewed from a multi-decade standpoint, the rate of debt growth in China rivals that of many other countries where their debt peaked resulting in a decline. While the trading infrastructure could have a solid return on investment, China might not get the chance to see the end of the plan if interest rates rise and the debt starts to unwind.