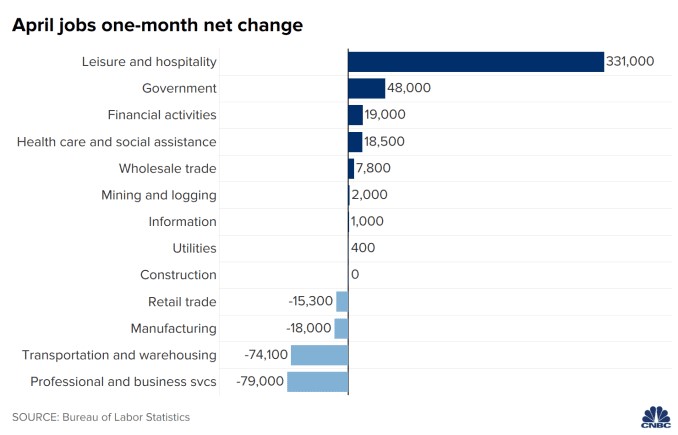 The April labor report was so shocking it seems incorrect. It was nothing like the solid ADP report. Furthermore, markets completely ignored this report after a temporary reaction. Essentially, the numbers were much different than everyone expected, but nothing changed. Don’t overreact to one BLS report which will be revised twice.

Speaking of revisions, the March labor report was revised down sharply from 916,000 jobs added to 770,000. The good news is private payrolls were only revised down 72,000 to 708,000. That means the government added 74,000 less jobs than we initially thought. That’s quite a wild swing.

In April, supposedly 266,000 jobs were added which dramatically missed estimates for 998,000 and the lowest estimate of 755,000. This was the biggest non-farm payrolls miss since 1998. The market decided this report didn’t matter.

One type of analysis actually supports this weak number. It’s obvious in hindsight, but no one saw this coming. As you can see from the chart above, overall jobless claims plummeted in the past few weeks. However, if you exclude the artificial impact of Ohio, initial clams barely fell from the March reference week to the April reference week. If this report stands after the next two revisions, we will be able to say for certain that this was an obvious leading indicator for the report that we all missed.

218,000 private sector jobs were added which missed estimates for 893,000 jobs and the lowest estimate which was 780,000 (ADP showed 742,000 jobs added). There would be nothing wrong with this report if it came out 1 year from now when the labor market will be nearly full. However, it’s terrible for an economy in its early phases of fully re-opening. America could potentially go back to normal within the next 2 months (in terms of the pandemic). April was supposed to be one of the best months for job creation this year.

Janet Yellen claimed the weakness was caused by childcare issues, fears of COVID-19 exposure at work, and supply chain bottlenecks. Furthermore, some believe the extra $300 in weekly jobless claims is encouraging people to stay home. It’s possible that all the people who wanted to work rather than staying on unemployment benefits went back to work last year. Now we might be left with the stragglers who would rather stay home.

As you can see from the chart above, more than all the jobs were created in the leisure and hospitality industry. It added 331,000 jobs. Amazingly, there were 0 construction jobs added. This makes no sense because there has been such a large increase in homebuilding. The ADP report’s reading of 41,000 construction jobs added makes more sense. We usually don’t side with ADP.

Furthermore, the BLS report shows manufacturing lost 18,000 jobs which is amazing since the Markit manufacturing PMI hit a record high. The ISM manufacturing employment reading fell 4.5 points to 55.1. That’s still above 50 which signals improvement. The weakest industries for job creation were couriers & messengers, auto manufacturing, and education & health. The chip shortage is hurting auto companies. You would think with kids getting ready to go back to school that there would be more jobs added in education.

The chart below shows the bizarre 77,000 drop in courier and messenger jobs (food & package delivery). Did companies cut back on these jobs because of an anticipated decline in online shopping or is this number simply wrong? It looks off based on the past 10 years of data.

Still A Large Hole Needed To Be Filled

We have been leaning in the wrong direction if this jobs report is correct. We were too bullish. There are still 8.2 million fewer jobs than in February 2020 which is a huge hole that needs to be filled. The unemployment rate rose from 6% to 6.1% which was 0.3% above estimates. The underemployment rate actually fell from 10.7% to 10.4% which is very weird. This was the biggest monthly drop in the U6 rate versus the U3 rate since September 2020 when the U6 rate fell 8 tenths further. The labor force participation rate rose 2 tenths to 61.7%. There was no change in the prime age labor force participation rate. It stayed at 81.3%.

As you can see from the chart above, there has been a massive spike in wages at the low end of the labor market. Production and non-supervisory workers in the leisure and hospitality industry are now making $15.68 per hour. It’s possible that some people don’t want to work in the industry until it’s fully safe. This could be causing employers to need to pay up to acquire workers.

The April BLS report missed estimates by a mile, but markets didn’t care. This could end up being a blip. The decline in courier & messenger jobs seems unnatural. The underemployment rate fell 0.4% more than the unemployment rate (which was actually up 1 tenth). While we whiffed on projecting high job creation, we were right about there being high wage inflation. If this report holds up through revisions, we can look to initial jobless claims excluding Ohio as the early warning sign that correctly predicted this weak headline reading.