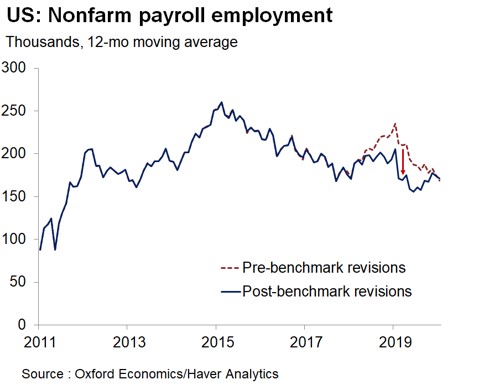 Job creation from April 2018 to March 2019 was revised lower by 514,000. This was the biggest downgrade in payrolls growth since 2009. However, this wasn’t a shock to investors because the BLS pegged the revision at -501,000 a few months ago. This update incorporated the revision into the data for the first time. Interestingly, this change left February 2019 with just 1,000 jobs created which means the record long streak of positive job creation just barely continued. This shows how chance has played a role in this streak.

The chart above shows the pre-benchmark and post-benchmark revisions to job creation. Payrolls growth is now slower in 2018 and early 2019. The upturn related to the tax cut wasn’t as pronounced as it was originally thought to be. It’s also notable that job creation has been in a downtrend since 2015. This makes us believe the downtrend is related to the economy approaching full employment. The cyclical factors are less pronounced as the labor market nears full employment as there’s only a certain number of people available to get jobs. Total job creation in 2019 was the lowest since 2011. Even if the economy has a cyclical improvement in 2020, there might not be an increase in job creation. Wage growth was revised higher in this benchmark change. Higher wage growth than initially expected (although off the peak) is consistent with the idea that this revision was related to the labor force running out of slack.

There were 225,000 jobs created in January which beat consensus of 160,000. This beat the most optimistic estimate which was 200,000. This report was probably helped by the mild winter weather as construction created a large number of jobs. 206,000 private sector jobs were created, which beat estimates for 150,000. In a previous article, we mentioned that when the ADP report is strong, it’s usually above the upcoming BLS reading. That’s what happened (ADP showed 291,000).

In a month where the benchmark revision was -514,000, it’s funny to see that the prior 2 reports were hardly revised. The November report was revised up 5,000 to 261,000 and the December reading was revised up 2,000 to 147,000. 1 year average job creation is in a long term downtrend as we mentioned earlier. There is still a small amount of slack left in the labor market as people are coming off the sidelines and into the labor force. The chart above shows there needed to be 103,000 jobs added to keep up with population growth and 165,000 to keep up with labor force growth. Since it surpassed both, there is some slack left. By definition a full labor market can’t create more jobs than population growth.

The manufacturing industry created -12,000 jobs which missed estimates by 6,000. The December report was revised up by 7,000 to -5,000. This is way below the ADP report’s showing of 10,000. The BLS reading makes more sense since the sector is just exiting its slowdown. Leisure and hospitality created 36,000 jobs which is good news for wage growth because if the ADP report was right about it creating 96,000 jobs, this lowest paying industry would have suppressed average pay.

Construction added 44,000 jobs as the solid housing market was likely boosted by the warm weather. Education and health services created 72,000 jobs. We have flirted with the concept that if this acylical industry is a larger portion of the labor market, the overall labor market and economy will become more immune to cyclical weakness.

The unemployment rate rose from its cycle low of 3.5% to 3.6%. However, that increase isn’t a bad thing because more people came into the labor force. The labor force participation rate increased from 63.2% to 63.4% which is the highest percentage since June 2013. The long term trend is lower because of the aging population. The 1% increase since September 2015 shows how strong the labor market is. The underemployment rate rose 0.2% to 6.9%. The December reading had been a record low.

The negative benchmark revision didn’t change investors’ outlook because it was known for months. It shows us the downtrend is related to the fullness of the labor market. Even cyclical upturns only create slight improvements. On the other hand, people coming off the sidelines are providing more slack to the labor market. It’s possible the expansion in the education and healthcare industry will make the labor market less cyclical. Finally, expansions don’t die of old age. A high prime age participation rate doesn’t mean a recession is coming.