Best Labor Report In History: What Does It Mean? 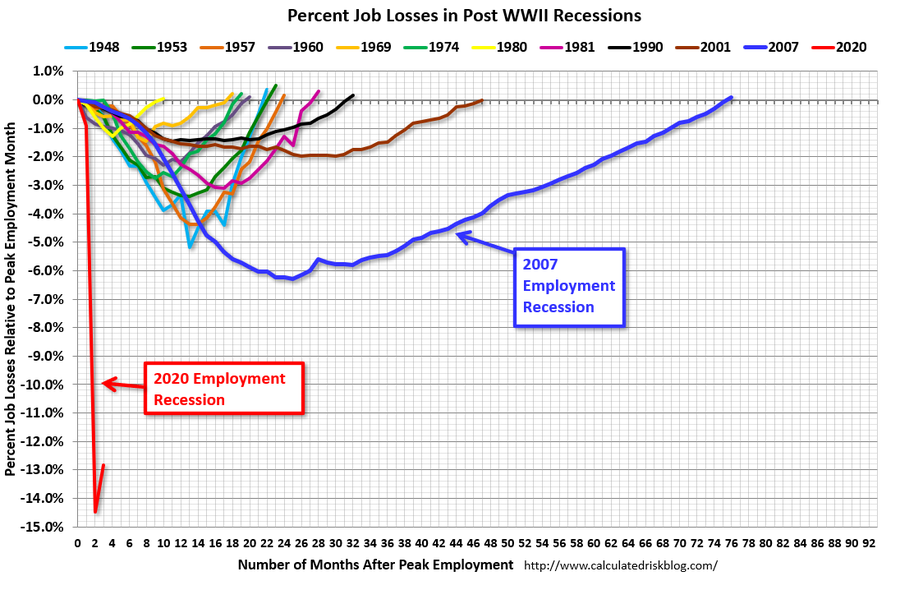 There were 2.509 million jobs created in May which was above the 20.687 million jobs lost in April and dramatically above expectations for 7.725 million in losses. Similarly, there were 3.094 million private sector jobs added which beat estimates for 6.5 million in losses and April’s reading of 19.724 million in losses. The S&P 500 rallied 2.62% on this news on Friday. While that seems like a very large rally, it’s actually small when you consider the scale of this beat. That rally is the type of response you’d get from a normal better than expected number. This was several times the size of the largest beat ever.

Stocks didn’t rally as much as the beat implied because they anticipated this report. The last time the S&P 500 was up at least 3% for 3 straight weeks was in September 1982. This has been the best 52 day run the stock market has ever had. It’s notable that most economists were expecting a rebound in job creation this year. The error was in the timing as they expected the rebound to start in June. The good news is the top in the unemployment rate didn’t get as high as many anticipated which means there’s less to recover from.

The bad news is this great report is because of government support. The government paid small firms to keep their workers. It’s going to be interesting to see what happens when the government stops helping firms. The government’s policy response was more effective than most are giving it credit for as we have been mentioning in our articles. PPP loans that became grants incentivized companies to rehire workers in their 8 week forgiveness period. Let’s see if demand comes back once the PPP loans end. On the one hand, small firms can decide to close once government benefits expire because there is uncertainty and there might be precautionary measures that inhibit profitability.

On the other hand, there’s good reason to believe demand will be there when the economy fully reopens. As you can see from the chart above, consumer credit fell by the most ever in April. It was down $68.8 billion. In April consumers paid down debt, saved money, and opened stock trading accounts at a record pace. As we discussed in a previous article, income growth in April hit a record high. Many of the consumers who received government help are in better shape than before the recession. That could help the labor market recover as demand could be strong.

Recovery A Long Way Away

The charts that show job creation per month with a V-shaped recovery are misleading because going from losses to gains, doesn’t make for a full recovery. As you can see from the chart below, May’s BLS report was only the beginning of the recovery. The gain in May was 12.1% of the losses in April. The problem is the jobs added in May were the low hanging fruit. No jobs were actually created. It was just people coming back to work after temporarily being away.

The number of unemployed people who were temporarily laid off fell by 2.7 million to 15.3 million. The number of permanent job losses rose 295,000 to 2.3 million. The jobs will come back, but the people who had them had their ties with the firms severed. 73% of people who lost their job said it was temporary. You can say they’re too optimistic or you can say that means most jobs will come back quickly. This percentage has never gone above the low 20s since the 1960s, so there is no way of knowing for sure what will happen.

There has been about a 1 million increase in permanent job losses this recession. The percentage saying their job loss was temporary fell from the high 70s last month. People need to get their jobs back quickly or else they might not get them back. The longer someone stays unemployed, the harder it is to reenter the workforce. Since most of the cuts occurred in March and April, the percentage unemployed for 5-14 weeks skyrocketed as it hit 70.8%. Just 18.5% have been unemployed for less than 5 weeks. That also means there haven’t been many losses in the past few weeks.

There’s a controversy about the unemployment rate which fell unexpectedly from 14.7% to 13.3%. The controversy was that workers who say they aren’t working, but expect to be recalled to their jobs should be classified as unemployed, however, there was a group of workers mistakenly classified as employed. The BLS stated, “BLS and Census Bureau are investigating why this misclassification error continues to occur and are taking additional steps to address this issue.” If the workers who were recorded as employed but were absent from work because of “other reasons” were counted as unemployed, the unemployment rate would have been 3% higher. Keep in mind, this same issue occurred in April. That’s important because that means the unemployment rate still fell. As you can see from the chart below, the amount of workers misclassified fell from April (difference between orange & blue line shrunk).

There was a big surge in jobs in the leisure and hospitality business as restaurants reopened. It added 1.239 million jobs. The information sector was the worst private sector industry as it lost 38,000 jobs. The lowest paying industry added the most jobs and the highest paying industry lost the most jobs out of the private sector. (The government lost 585,000 jobs.) That caused wage growth to fall sharply.

Hourly wages fell 1% from last month. On a yearly basis, growth fell from 8% to 6.7%. Because the work week length increased from 34.2 hours to 34.7 hours, weekly wage growth increased from 7.4% to 7.7% which set a new record. The chart below shows the cumulative change in employment since before the recession. There is still massive ground to be made up. Leisure and hospitality has the most to recover despite having the highest job creation in May. The June labor report will likely have massive job creation.

The one tipoff about this surprising report that told us it could be good before it came out was the continuing claims reading. In the survey week, continuing claims fell sharply. Claims increased slightly the following week, but stayed below the peak. We’ll be watching that data point to measure the improvement in the labor market.

This labor report was the strongest ever. This is likely the first of many reports showing improvement as temporary job losses turn back into employment. The stock market knew this was coming. That’s why it only rallied 2.62% on Friday. That rally seemed like a lot because of how far it has come so quickly, but it’s not big in relation to the size of the beat. The PPP program, unemployment benefits, and the stimulus checks worked. The question is how the recovery goes without further government help. If the government says it’s done helping people, we probably will see major stock market volatility.