Bearish Yet Long: The Definition Of FOMO 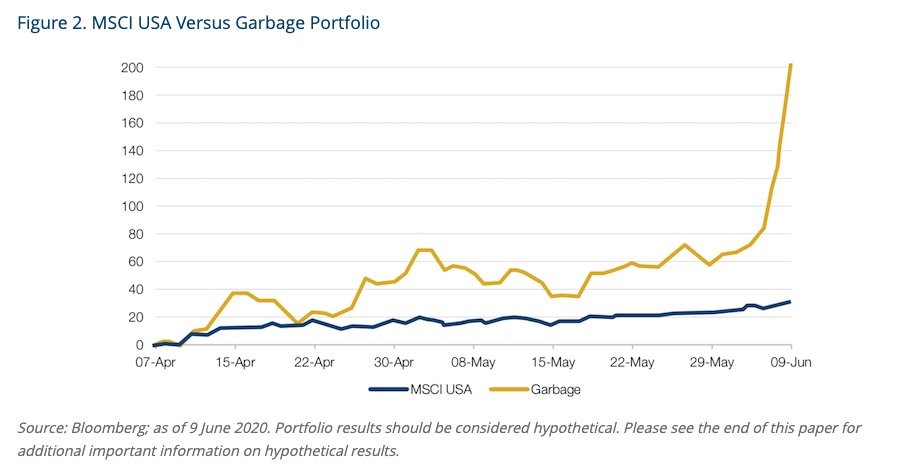 The U.S. stock market is in a highly unusual state even though there has been little movement in the past couple days. In the AAII individual investor sentiment survey in the week of June 17th, there were only 24.4% bulls which was an enormous 9.9 point decline from the prior week. It’s below the average of 38%. The percentage of bears rose 9.7% to 47.8% which is above the historical average of 30.5%. This is extreme negative sentiment. It’s almost as negative as it was in March even though stocks have rallied significantly.

It seems like people are buying stocks even though they hate them considering the fact that there has been record retail account openings and record small trader call buying. This might be because people believe the Fed will prevent declines. That’s an incorrect assumption. This sentiment on the Fed is the exact opposite of what we saw in March when people said the Fed couldn’t cure COVID-19 (obviously true: the point being it couldn’t help stocks).

The retail positioning in which they are bearish, yet simultaneously extremely long call options and creating record new accounts is similar to hedge funds as we mentioned in a previous article. Hedge funds are very long stocks even though they see them as overvalued and they don’t see a V-shaped recovery. The chart below combines these points. The NAAIM investor fund manager exposure index rose from 77.48 to 88.25 in the week of June 17th. That’s an extremely bullish reading (highest possible is 100). It’s slightly below the 91.6 reading 2 weeks ago which occurred right before the 5.9% drop last week. As you can see below, the difference between exposure and bullish sentiment is very high. It’s be better if we used apples to apples (the same class of investors), but since both retail and hedge funds are behaving the same way, it works.

If you are an individual investor, you don’t need to chase stocks. No one will care if you underperform at the end of a rally. This is a huge advantage; use it! Besides the spread between positioning and sentiment and the fact that the 7% correction did nothing to stop the bullish sentiment, the other worrisome aspect of this market is the speculation in heavily indebted microcap stocks.

Firstly, let’s note that the Russell Microcap index which has 1,000 stocks (average market cap of $420 million) is 7.8% off its record high even though the average company has a debt to enterprise ratio if 65% which is above the S&P 500’s average of 30%. There’s a strong argument for a recovery in indebted names because they are the most exposed to a tightening in spreads. However, there’s a big difference between rallying off the low and outright parabolic speculation.

The chart above shows the pure speculation in the garbage stocks. Garbage stocks are stocks with a credit default swap of over 1,000 basis points as of April 1st.

The 3 causes for concern amongst investors are COVID-19, valuations, and a potential corporate tax hike. The Democrats are in favor of a corporate tax increase; the PredictIt betting market shows Biden with a 58% chance of being elected. The market generally doesn’t wait for negative events that everyone sees to occur before pricing them in. The market gets out ahead of situations that are obvious. Black swans like the COVID-19 crisis impact stocks all at once because the market doesn’t price in every small risk factor that can have a large impact. Stocks climb the wall of worry.

We did a Twitter poll where we asked our followers how the sharp spike in COVID-19 cases in Arizona and Oregon and the steady increase in Texas, Florida, and California impacted their sentiment. 63 people voted. 34.9% said it had no impact on their opinion, 19% said it made them significantly more bearish, and 46% said it made them slightly more bearish. We even got a comment asking why we didn’t include a bullish option!

As you can see from the chart below, COVID-19 cases are experiencing extreme compositional turnover.

The Northeast and Midwest are seeing declines in cases per million, while the South and the West are seeing increases. The issue is that the Northeast has very little room to fall. It might even stop falling once New York City reaches phase 2 of its reopen in late June or early July. In other words, total new cases in America could spike in the coming weeks. The 7 day average of cases is 23,365 which is up from 21,352 on May 28th.

The number of deaths has been falling as it seems like, based on Florida data, that more people who are younger than 50 are going out, while those over 50 are staying inside. The death rate is higher for older people. In Florida, the 7 day average of new cases per day has increased from 726 on June 1st to 2,193 on June 17th. On the other hand, the 7 day average of deaths has increased from 30 to 31. The increase in testing isn’t the only catalyst for the increase in cases in Florida. The average percent positive tests from June 3rd to June 6th was 3.125% compared to the average of 5.86% from June 12th to June 15th.

We have very bullish investor sentiment on U.S. stocks even though the percentage of bulls in the AAII survey is very low. The FOMO trade involves too much trust in the Fed. Investors are positioned bullishly even though they say they are bearish and think U.S. stocks are overvalued. That’s the case for funds in the BAML survey and retail investors. Highly indebted microcaps and momentum cloud stocks have done very well. The risk of COVID-19 is being ignored despite the spike in cases in Arizona and Oregon and the steady increase in Texas, Florida, and California. The death rate is low, but the percentage of positive readings is increasing which shows higher testing isn’t the exclusive cause of the spike in cases.