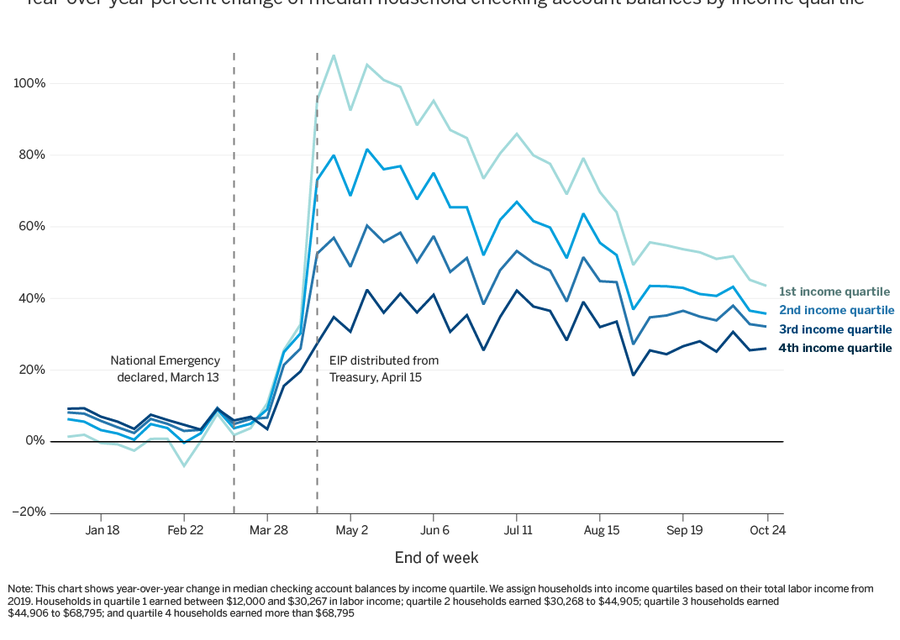 The November retail sales report wasn’t good. It shows the need for additional stimulus. Many will criticize the $600 checks and the 11 weeks of $300 in unemployment insurance, but it will have a significant impact on spending to start the year. Of course, many want more money, but that’s not up to us. We just play the hand we are dealt.

The checks probably won’t impact December retail sales, so another weak report is coming since there have been more shutdowns and initial claims have increased (although if they go out early next week that would bump up results in December). It’s notable that stock investors are ignoring the weakness in consumer spending as the S&P retail ETF is up 27% since October 30th. They agree with the consumer survey we detailed in a previous article that said consumers expect the highest spending growth since July 2016.

There is a big difference between yearly retail sales growth with and without food services because of the pandemic. Indoor dining is closed in NYC, so the results will be even starker in December. Retail sales growth including food services fell from 5.5% to 4.1%. Without food services, growth fell from 8.3% to 7.1%. The chart above shows the breakdown of the report. There was some stocking up on food and beverages like in March and April, but the trade to buy firms that benefit from this isn’t working because investors see this as temporary now that we have the vaccines. Moderna’s vaccine was approved on Friday.

Do not get fooled into thinking high consumer spending growth is sustainable without fiscal help or a reopening of the economy. This is a very unstable situation. Just because stocks show confidence, doesn’t mean it will go smoothly. It also doesn’t mean it won’t.

As you can see from the chart below, the yearly change in people’s checking accounts is shrinking across all income quartiles.

It’s on an unstainable path towards the negatives. The next fiscal stimulus will buy the economy a couple of months before trouble awaits again. As we have said previously, the stimulus in the spring was the most successful fiscal policy in decades. The timing is what we are most impressed with because Congress usually acts like it has for the past months – that is slow and ineffective.

There are contracting real time data points on consumer spending which we have mentioned in prior articles. The BAC card spending data looks good and Chase’s data looks bad. Maybe the truth is in the middle. The chart below shows the 7 day average of card spending growth has been below last year the entire season. Non-seasonally adjusted total retail sales growth was 2.5% in November, so it seems like this is too low.

Chase spending growth is -5.4% in the holiday shopping season. That being said, most of the decline has come after Black Friday which the BAC data agrees with. The December retail sales report could end up being a bloodbath. We might see negative job creation and negative yearly retail sales growth. Remember, we think when the economy reopens next year, there will be a burst in spending on group indoor activities that haven’t been allowed under COVID-19 restrictions (think concerts).

Cheap Stocks Used To Do Well

We are seeing extreme criticism of value investing. Many say value stocks are bad businesses and deserve to be cheap. They say you shouldn’t be able to make money just buying low multiple stocks. Maybe most do deserve low multiples, but good investors should find the ones that deserve higher multiples. The counterpoint about making money just buying low multiple stocks is you can argue growth investors are just buying high growth stocks. However, high growth investing has been a winning strategy even though it is simplistic.

Cheap stocks had a really great run from the mid 1970s to 2007 as you can see from the chart above. The wheels have fallen off in the past few years. 2020 accelerated that trend up until November when value had its best month ever. If value regains its mojo in 2021, there will be a sea change in how markets price assets. Commodity stocks will be winners again.

The semiconductors are part of the growth trade gone maniacal. As you can see from the chart below, just like in the late 1990s, the SOXX semiconductor index has gone vertical. It is over 3.5 standard deviations above its 200 week moving average.

These returns won’t continue as valuations are too high. On the one side, you have growth stocks issuing shares and on the other side you have value stocks buying them back. The imbalance will subside due to the law of supply and demand. It’s just a matter of how great the insatiable demand for speculation in growth stocks gets.

The November retail sales report wasn’t good and the December one will probably be worse. Bank accounts are shrinking. The stimulus will help bridge the gap between January and when the economy reopens. Value stocks imploded up until November. You need to see higher inflation and economic growth to get a phase change. Of course, you can make a bet with higher odds if the value stock you invest in has strong fundamentals (deserves a higher multiple). The semiconductor index has risen out of control just like in the late 1990s.