Are We In The Stagnation Phase? 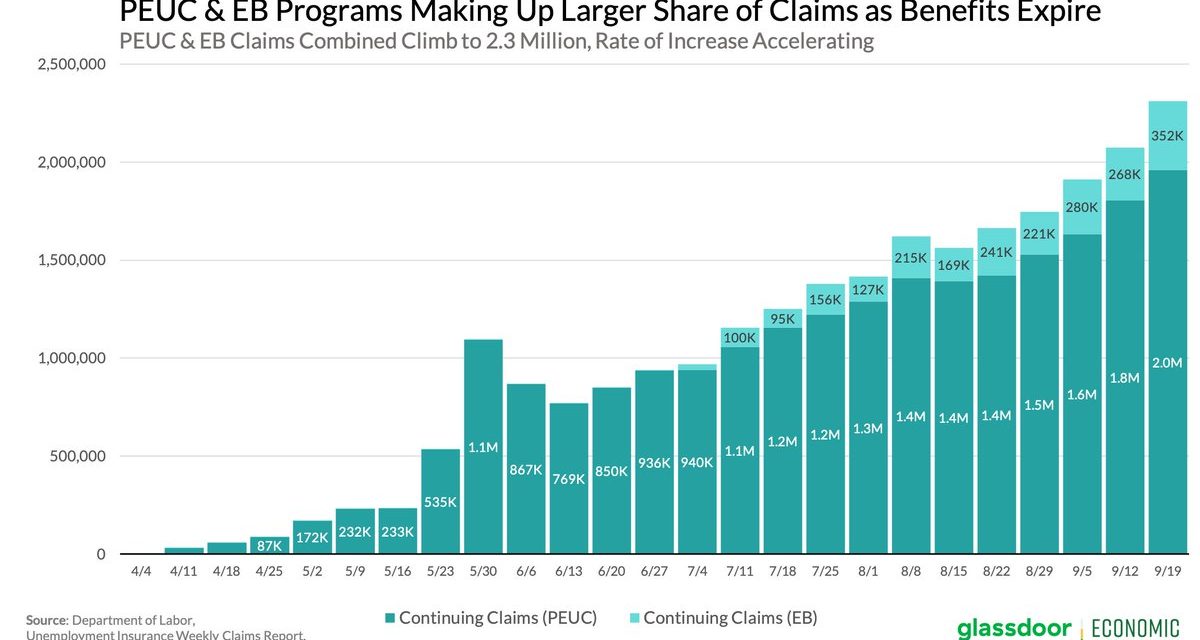 The labor market’s rate of improvement is starting to slow. Seasonally adjusted search results on recruitments, job applications, and job interviews have been stagnant for a few weeks. The recent bout of weakness could stem from the outbreak of COVID-19 cases in a few states in the Midwest. Obviously, states like the Dakotas don’t have big labor forces, but it’s still notable.

Adding to this weak data, in the week of October 3rd seasonally adjusted initial unemployment claims were 840,000, which was only down 9,000 from the prior week. It was actually up 3,000 from the original reading before the revision. Even worse, non-seasonally adjusted initial claims rose from 799,000 to 804,000 which means they have only fallen 35,000 since the first week of August.

It’s interesting to think some people believed Americans weren’t working purposely just to collect unemployment benefits. With the decline in federal help not significantly pushing initial claims lower, we have evidence that was an incorrect theory. No one wants to be on unemployment benefits because it’s a precarious situation. We saw that play out with the $600 in weekly benefits going away. Most people always pick safety over a little extra money. In the long run, it could make sense to get paid less than benefits (for a few weeks) because the job might not have been available if people didn’t return to work. The only thing that might have caused people to not want their jobs back is fear of the virus.

Remember, California stopped processing unemployment claims. The next report will show their restart. It seems like their PUAs will fall because they have a lot of fraud. There might be a backlog of regular initial claims though. We will be looking at California’s data closely.

The chart below shows the combination of PUAs and NSA initial claims fell. That’s because PUAs fell 44,000 to 464,000. The combination fell 3% this past week and 10% in the prior week because of a big negative revision to Puerto Rico and Arizona data. Specifically, PUAs were revised from 650,000 to 509,000 which was catalyzed by a 126,000 revision to Arizona’s data. Arizona has had a disproportionate number of PUAs which has clearly been some sort of error. Some economists say that they ‘know the data is wrong, but it still looks bad’. We say to heavily discount anything that’s incorrect.

Big Step Down In Continued Claims

The COVID-19 pandemic is causing many small businesses to be on life support while big companies negotiate bailouts. Restaurants and movie theaters especially in New York and other places with harsh restrictions are in the worst shape. That’s while stocks rally higher. The bigger restaurant chains that are well capitalized are actually benefiting from the demise of small restaurants. Their stocks are rising in anticipation of less competition.

Continued claims from the week of September 26th fell from 11.979 million to 10.976 million which is more than a 1 million decline. That sounds great, but hundreds of thousands of people are shifting towards PEUCs and extended benefits or are just dropping out of the labor force. Some jobs are coming back, but the hardest hit areas are still in trouble. It doesn’t help small businesses now if a vaccine might be out in months.

As you can see from the chart above, in the week of September 19th, PEUCs rose from 1.8 million to 2 million and extended benefits rose from 268,000 to 352,000. If the trend continues, over 1/3rd of the drop in continued claims may have been a result of people’s benefits expiring/shifting to other programs. With the spike in initial claims being the worst in late March and April, the spike in PEUCs and EBs is going to grow larger. We might even shift our attention away from continued claims. Keep in mind, pandemic assistance goes away in December. If would be a complete disaster if 2 million people lost their benefits at once.

As you can see from the chart below, there starts to be a significant negative impact on seasonally adjusted restaurant bookings when the outside temperature falls to the mid to low 40s.

Winter is coming and it is about to wreak havoc on the already weak restaurant industry. The good news is 12 million Abbott test kits were delivered to all 50 states. The hope is people can show their negative test to eat indoors. That’s not on the immediate horizon, but it’s the best chance for restaurants to have a normal season.

The Russell 2000 has underperformed this year. The stock market has been led by large cap growth stocks, while the regional banks have been in the dog house. That has changed in October. As you can see from the chart below, the 10.99% gain in the Russell 2000 in the past 10 days is one of its best performances in any 10 day period in the past 40 years.

Furthermore, the KBW small cap bank index is up 18.3% since September 23rd. This is while there has only been a modest increase in long yields. The other possibility is these stocks like the movement towards more reliable and faster testing and better treatments. Plus, they are pricing in another stimulus.

The jobless claims report wasn’t great especially when you consider the large spike in people on pandemic claims and extended benefits. Restaurants are about to face a tough winter as their sales will plummet when temperatures fall into the 40s. Interesting, small cap stocks and banks have been doing relatively well in October. The modest rise in the long bond helps, but it hasn’t been that impressive. Investors might be looking forward to a return to normalcy in 2021 and a stimulus. Since the bottom in banks on the 23rd, Zoom stock is down 4.4%. Obviously, that’s underperformance, but it’s not enough to signal the market truly believes most people will return to work in person.