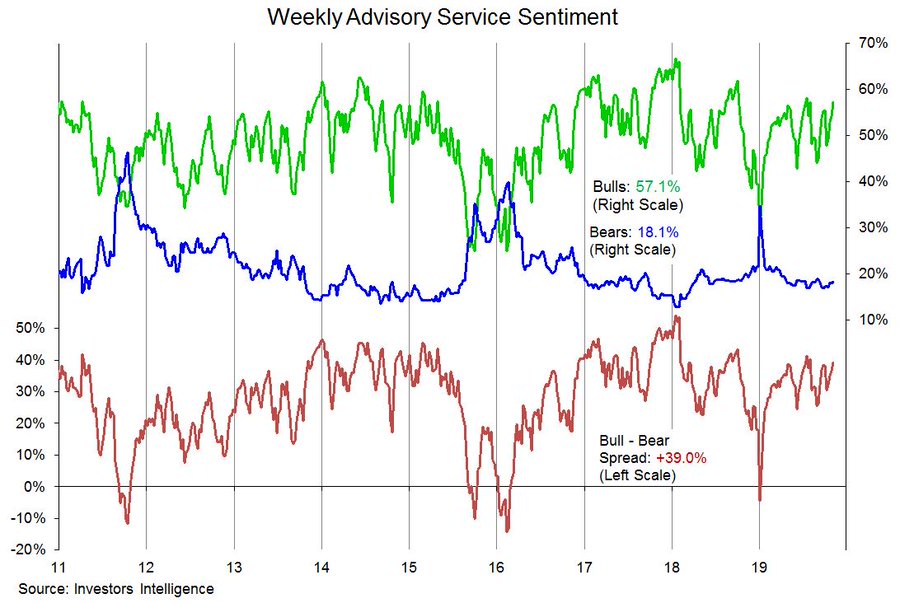 The recent run in stocks has been quite strong. It’s easy to see in hindsight why stocks have done well. Phase 1 of the trade deal appears to be close to being done, Q3 earnings season hasn’t caused Q4 EPS estimates to plummet, and there are some inklings the manufacturing sector is rebounding. When you are investing, you don’t want to buy stocks because of what has recently happened; you want to look for the next catalyst. It’s fair for stocks to have rallied, but by some indicators they have gotten overbought which is a negative.

By some measures, the market is in a euphoric state and by others it is mildly overbought. The CNN fear and greed index signals there is euphoria as the index is at 88 out of 100 which signals extreme greed. When the index hit 89 on Tuesday, it was the highest level since the fall of 2017. It’s currently higher than the cycle high in euphoria in January 2018. Obviously, we aren’t using this metric to say that was the cycle high.

After surprisingly not having above average levels of bullishness despite the record high in stocks, the AAII investor sentiment survey is finally indicating there is more optimism than usual. In the week of November 6th, the percentage of bulls increased 6.3 points to 40.3% which is above the long term average of 38%. In the past 4 weeks, the percentage of bulls has increased by almost 20 points. That is the largest increase in a 4 week span since the 22.9 point increase from December 2017 to January 2018.

Even so, being slightly above average shouldn’t cause too much concern. The percentage of bears fell 4.5 points to 23.9% which is below the average of 30.5%. That’s slightly more worrisome, but not to the point where you should be an outright contrarian on stocks. As you can see from the chart below, the advisory sentiment index has 57.1% bulls and 18.1% bears. There are almost always more bulls than bears amongst advisors probably because they make money keeping people invested. As you can see, the bull bear spread is elevated, but it’s not incredibly high. Here you can see the cycle peak in January 2018.

This Has Been A Global Rally

Even though it’s clear the global economy is still in a slowdown, global stocks have been rallying. It’s no longer just the US market that’s doing well. Maybe investors expect a cyclical upturn from all the global central bank rate cuts. The MSCI All Country World Index is at $76.85. The record high was $77.54 in January 2018. As you can see, January 2018 was a historically important month. It marks when markets started to realize there was a slowdown underway. That’s after 2017’s main trade was betting on the global synchronized recovery. There can be great change from year to year. Investors are betting on that change being positive in 2020.

As you can see from the chart below, the percentage of the 49 markets in the ACWI index with improving 200 day moving average has increased to 73.5%.

If you have been waiting for an all clear sign in the economy, you would have missed a lot of gains in markets. You don’t want to wait for the economy to be perfect to buy stocks. The percentage is closer to its peak than its trough which occurred in early 2019. Obviously, if the cyclical turnaround fails to be realized, we could see a big correction in global stocks. The decline could be heightened in America as it drove global markets higher in the first half of the year. It has already started to underperform moderately in the past few months.

In Q3, productivity growth fell sharply and unit labor costs rose sharply. That’s good for workers, at least for now, and terrible for corporate profit margins. Currently, we are in the longest margin contraction in post war history as it has lasted 4.5 years. It’s unusual for margins to fall this much for this long without a recession. There haven’t been mass layoffs yet. Specifically, in Q2 quarterly productivity growth was revised from 2.3% to 2.5%. In Q3, growth fell to -0.3% which missed estimates for 1% and the low end of the estimate range which was 0.1%. That was the first drop in productivity in 15 quarters. Hours worked grew quicker than output which pushed down productivity growth.

As you can see from the chart below, capital per worker growth is very weak. It has been correlated with the 5 year average of private sector real productivity growth. Usually when the unemployment rate falls this low, there is higher net capital spending as a percentage of capital stock.

By some measures US investors are being greedy. The breadth of the rally in global markets has increased this year as investors see a global cyclical upturn coming in 2020. In the first half of 2019, the US has outperformed the global index sharply, but in the past few months there has been modest underperformance. Productivity growth was weak in Q3. More importantly, it has been weak all cycle as capital per worker growth has been weak. Compensation growth was stronger than expected in Q3 which is great news for workers and bad news for margins which have already been falling for 4.5 years. It has been a slower longer decent than last recession where margins cratered further, but only fell for 1 year.