Are Indentured Servant Student Loans Worth It? 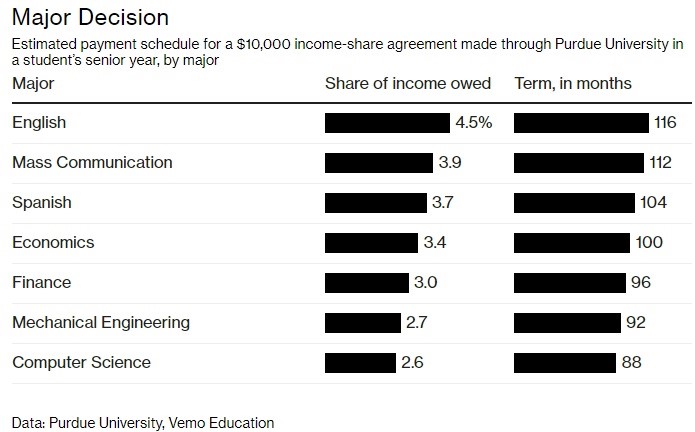 We love analysis which attempts to disprove a belief we have. If the analysis is wrong, you at least learn something new. If the analysis is correct, your worldview changes either in a small or a large way. One of our previously held beliefs which was changed by research was that we thought buyback blackout windows caused stocks to fall. That turns out not to be the case. We freely admit that we will make mistakes. When you hold onto the concept that you need to be perfect because of your intelligence level or educational background, you stop learning. If you aren’t evolving as a person, you are stagnant. Which means, you won’t be a good investor in a constantly evolving world.

The chart below is shocking and some with student loans might actually find it offensive.

The time it takes to recoup a bachelor’s degree hasn’t increased in the past three decades. It actually takes less time to recoup the cost of a degree now than in the 1980s. That could be because the labor market is providing more opportunities for real wage growth. We asked about the latest data from 2019; it takes about 12 years to recoup the cost of a degree this year which is basically unchanged from the end of the chart which is 2013.

This chart looks at the relative cost of working, while not having a degree. A college degree raises potential earnings and lowers the chances of being unemployed. However, this is just an average. If you don’t graduate or graduate in over 4 years, the debt burden garnered by going to college could be severe. That’s why being sure of your major and knowing that you will graduate on time are important to deciding if you want to get a bachelor’s degree. According to Noa Smith, the college affordability crisis is more about financing than the increase in tuition prices or stagnant incomes. Parental assistance has been replaced with student loans. Loans with high interest rates cause wealth to shrink rather than accelerate through compound interest.

If you make the case that a big issue of student debt is financing, then it needs to be restructured. An indentured servant was someone who promised to work for a fixed time for a employer in America who would pay for their trip to America primarily from Europe. Many people took this deal because they were in search of a better life in America and they didn’t have the money to pay for the trip. This also occurred in other circumstances and time periods in the US. Essentially, people traded their future time for potential opportunity. It’s easy to say you wouldn’t make that choice now, but when there isn’t much of an alternative people will take a risk. That risk was a bet on the upside of America and what people thought they could make of themselves in the new country.

When students agree to share their future income with an investor instead of taking out student loans it can be considered a partial indentured servitude. We think of this deal as a bet against yourself achieving great income growth. Surely if you’re only giving a few percentage points of your income, you still have the incentive to make more money. However, at a certain threshold, depending on the deal, it would be better to have a loan. It’s great to not have loan payments if you lose your job, but those who graduate college have a lower unemployment rate than those who don’t. Also, you will need to find another job quickly anyway because of living expenses. If you are really scared of losing your job, the common rule of thumb is to save 6 months of expenses and set it aside in an account you use only in cases of emergency.

The chart above shows the various potential income sharing agreements at Purdue University by major. As you can see, an English major needs to pay 4.5% of his/her salary for 116 months. If you are on the fast pass to success because you are a great writer, you could end up paying more than you would with a regular loan. This chart really spells out the pay differences of each major in black and white. Sometimes college students aren’t aware of the specific earnings potential of each major. It’s fair not to worry too much about that because you never know what company you will end up working for.

The Income Sharing Agreement (ISA) market is only worth tens of millions of dollars while the overall student debt market is worth $170 billion. This might change in the future if our poll has any validity.

More people would rather pay 3% of their annual income over 8 years than get a traditional student loan with a 5% interest rate. Maybe people are just sick of student loans and are willing to try something new. But as we mentioned, this may not be the best outcome in all circumstances.

It’s not a surprise that job openings fell in February because the BLS report stated only 33,000 jobs were created. You can see the recent big dip in the cumulative growth in openings since 2012 in the chart below. There was also a slight decline in hiring.

February openings fell from 7.625 million to 7.087 million. That missed the consensus for 7.565 million and the low end of the range which was 7.1 million. Apparently, economists didn’t use the BLS report to make their estimates. Hires fell 2.3% to 5.696 million. The spread between openings and hires fell for the wrong reason. It was down over 400,000 to 1.391 million. We want to see hires increase, not openings decrease.

As you can see from the chart below, the state and local government’s quit rate in the education industry increased to the highest level since at least 2000. Usually quits increase when wage growth is high and the labor market is fluid. In this example, the quit rate is elevated because of poor pay as there are large teacher’s union strikes across the country.

It makes sense to go to college if you graduate on time and use your major for a job you want. It’s tough for all that to work out perfectly for young people and it’s even more difficult when they are in a low income household. Selling a percentage of your future earnings is interesting, but will cost more than a loan if you are very successful. The JOLTS report was weak, but that was expected since the February BLS reading wasn’t good.