An Economic Recovery Or An Illusion? 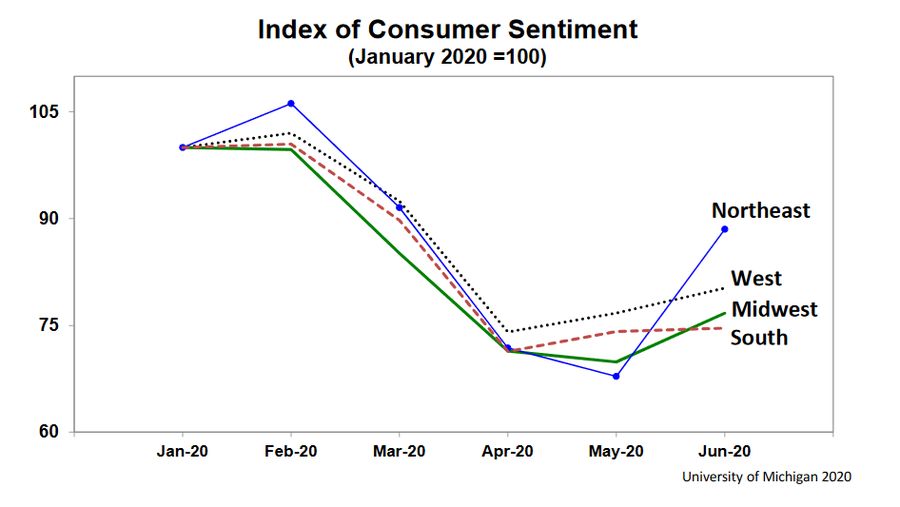 The final June University of Michigan consumer sentiment report showed the overall confidence index fell from the preliminary reading of 78.9 to 78.1. It was still up from 72.3 in May, but investors want to see continued increases. Investors follow the rate of change which means whenever anything falls back, it’s cause for concern. The economy can’t afford to slip backwards because the recovery up until this point has only gotten the data from depressionary to recessionary. The economy is still very weak. Stalling out now would be a disaster. In early June, euphoric investors started to think we would see a quick V shaped recovery. That was idealistic because COVID-19 is unpredictable and the economic recovery is highly reliant on fiscal and monetary stimulus which could go away or prove to be ineffective. Finally, the election is an added risk to the stock market.

The issue with the slight decline in the final reading from the 1st half of June survey is it supports investors’ worst fears. It jives with the latest news on COVID-19. We are seeing huge spikes in cases in some states in the south and the west which has caused states such as Florida and Texas to halt their reopening plans. Just 2 weeks ago we heard from the optimists that there was no way the economy would shut down again. We countered that even if it doesn’t shutdown, people will take precautions. Even if people aren’t dying in as large numbers, most people will want to avoid getting sick and the possibility of ending up in the hospital.

The current conditions and expectations indexes rose from 82.3 and 65.9 to 87.1 and 72.3, but the highlight of this report was the breakdown by region. The changes in confidence were correlated with the spikes in cases. Since we have seen an increase in cases in the hot spots since this survey was done, it’s possible sentiment in those areas weakened further. Specifically, in the south sentiment only increased 0.5 which pushed it from the 2nd most confident region to the least confident region. Obviously, Texas and Florida are facing a major crisis which has only worsened in the past few days. It’s probable in the past few days, consumer spending in those areas fell. In the west, the index only rose 3.3 points as it went from the 1st to 2nd most confident region. Arizona and California are the states with the biggest issues in this region.

On the other hand, confidence in the northeast rose 19.1 points which was a new record. It jumped from last to first place as New York and New Jersey saw big declines in COVID-19 cases, hospitalizations, and deaths. This is the potential improvement the economy can experience if COVID-19 is eliminated throughout the country. Since the Midwest also saw a COVID-19 improvement, its confidence increased significantly.

Income fell sharply in May because the direct stimulus payments occurred in April. That drove the tough comp. Income growth fell from 10.8% to -4.2% which beat estimates for -6.4%. There was a $1,300 decline in transfer payments because of the stimulus’ timing as you can see from the chart below. Households had a $170 increase in compensation because people got their jobs back. Households also received $550 in unemployment benefits. As you can see, the improvement in the labor market is gradual in relation to the stimulus. If the $600 in unemployment insurance checks from the federal government go away, improvements in the labor market won’t make up the difference. That being said, consumers still spent more in May because they had savings from the previous month. April had the largest increase in income ever and the highest savings rate ever.

In April, the savings rate fell from 32.2% to 23.2%. There was pent up demand for goods and services as people who were stuck inside were allowed to go out. Obviously, some of that improvement will be rescinded in the south and west in late June and early July because of the renewed COVID-19 threat. In May, consumer spending growth improved from -12.6% to 8.2% which slightly missed estimates for 8.6%.

Spending isn’t back to normal just because of one month of improvement. As you can see from the chart below, spending is 11% below February levels as most categories are still down. The best industry was recreational goods and vehicles. Activities such as boating and camping can be good for social distancing. Growth from February went from -9.1% to 13%. On the other hand, healthcare spending is still down 24.5% which is hugely problematic because there are health implications from delaying elective procedures.

Even with the coming weak comps next year, they don’t see core inflation getting above 2%. There would need to be a dramatic shift in demographics or the economy to spur core PCE inflation to get above 2% for more than a couple months. This means the market can use low rates to price stocks and expect low treasury yields. The Fed is guiding for near zero rates for many years because inflation is expected to stay low.

Regional consumer sentiment strongly correlated with the outbreak of COVID-19. It’s no surprise people living in the states with the worst outbreaks had the smallest increases in sentiment. There will probably be a temporary setback in consumer spending growth until COVID-19 is under control. Because the stimulus checks occurred in April and not May, income growth fell. However, spending growth was strong because the economy mostly reopened in May, there was pent up demand, and consumers had money saved from the previous month. The economy avoided deflation on a yearly basis according to PCE. Oxford Economics believes core PCE inflation will stay below 2% for at least the next 18 months which indicates that the Fed won’t be pressured to raise rates.