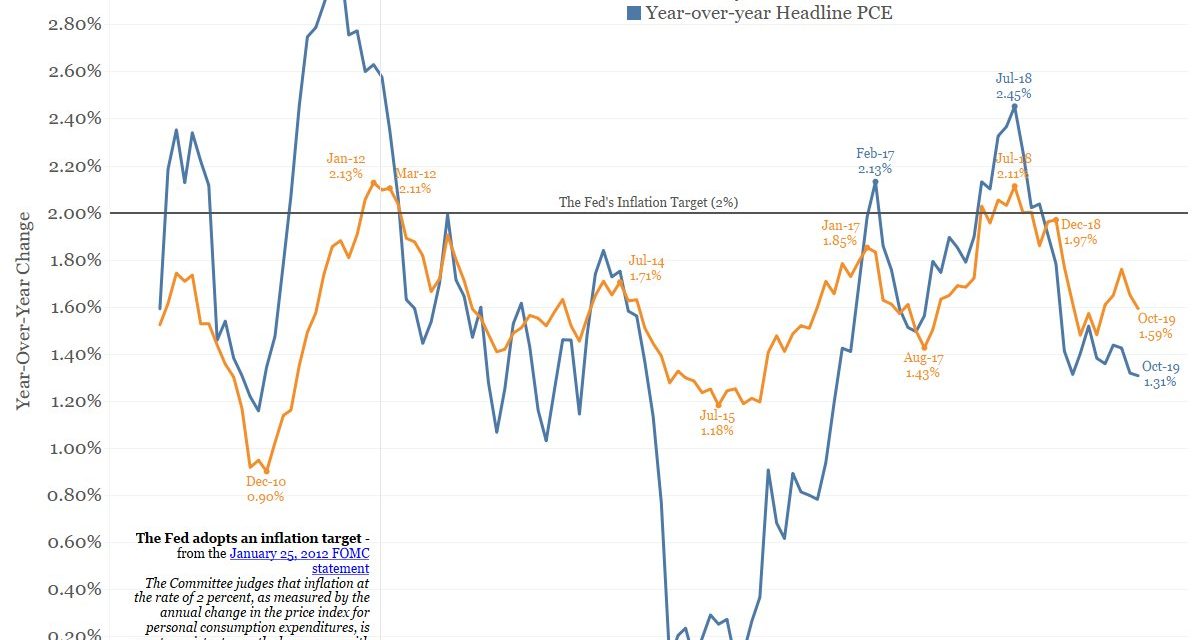 We no longer have very weak Q4 GDP growth estimates to compare this great bull market in stocks to because of the recent data. Oxford Economics now sees 1.9% GDP growth. However, we still can compare it to the weakness in the October PCE report. The Investors Intelligence poll shows there are 58.1% bulls (the highest since October 2018) and 17.1% bears. The SentimentTrader 20 day intermediate term optimism index shows there is euphoria. When this index has previously been at this level in the past 21 years, the S&P 500 has fallen 73% of the time in the next week and the VIX has increased 82% of the time in the next 2-4 weeks. The S&P 500 followed a 3 day losing streak where it lost less than 1% in total with a 4 day winning streak which brought it to more record highs.

The October PCE report was weak even though the Atlanta Fed GDP Nowcast raised its projection for Q4 real personal consumption growth from 1.7% to 2%. Monthly personal income growth was 0% which fell from 0.3% and missed estimates for 0.3%. Real disposable income growth was -0.2% monthly and just 2.8% yearly as you can see from the chart below. It’s still above real consumer spending growth, but less so than last month. Real personal income growth fell from 3.3% to 3%. That’s a terrible decline when you look at the comps as growth fell from 3.3% to 3% in 2018. That means the 2 year growth stack fell from 6.6% to 6%. This is actually the worst 2 year growth stack of the year because when growth was 2.8% in July (lowest yearly growth), its comp was 3.6%.

As you can see from the chart above, Oxford Economics projects real consumer spending and real disposable income growth to fall next year, with disposable income growth falling below consumption growth at the start of the year. This goes against the stock market’s projection of an economic rebound in 1H 2020. It will be tough for there to be strong GDP growth in 1H 2020 if consumption growth falls. This prediction is based on the premise that employment growth will fall.

Consumption growth is expected to fall less than income growth because of the high savings rate, low interest rates, moderate inflation, and healthy consumer confidence. This October report showed the savings rate fell from 8.1% to 7.8% as consumer spending growth didn’t pull back as much as income growth did. This is still above last year’s 7.3%. Because of the holiday shopping season, we wouldn’t be surprised if the savings rate falls in November and December even if this data is seasonally adjusted. Consumption growth’s 2020 trough is expected to be below the trough in the 2016 slowdown, while the income growth trough will be very close to its previous trough if Oxford Economics is correct.

The inflation readings were in line with the income and spending growth declines. PCE inflation was 1.31% which was above estimates for 1.2% and the same as last month. Core PCE inflation fell from 1.7% to 1.6% which missed estimates for 1.7%. Since the headline reading fell 1 basis point and the core reading fell 6 basis points, the difference between the two tightened. This difference should tighten considerably in November as oil prices face a much easier comp. Oil has been the main driver of this difference in the past few months.

The chart below shows when the Fed implemented its 2% core PCE inflation target in January 2012. Since then, core PCE has very rarely been above 2%.

Since the Fed looks at inflation symmetrically, meaning it needs to stay at 2% over the long run, it has never achieved its goal. The 2 year growth stack of core PCE has never reached 4%. Growth has usually been above 2% because of weak comps. There will be weak comps from February to July of next year. If the economy rebounds, core PCE could get above 2% sometime in early to mid-2020. The Fed is unlikely to hike rates next year though. Currently the odds of a cut are at 64.1%.

The durable goods report rebounded on a monthly basis because the comps were very easy. They got even easier with the revisions. Monthly new orders were down 1.4% in September instead of down 1.1%. In October, growth was 0.6% which destroyed estimates for -0.7%. Excluding transportation, growth went from -0.4% to 0.6%. There was a 0.1% negative revision. This reading beat estimates for 0.1%.

You can look at the all-important core capital goods orders growth 3 ways, monthly, yearly, and the 2 year stack. 2 of the 3 are positive. Monthly growth rose from -0.5% to 1.2% which beat estimates for 0.1%. It’s highly likely next month has weak growth with such a tough comp. Non-defense capital goods excluding aircrafts orders growth was -0.8% yearly which was the 4th straight month with negative growth. On the bright side, the comp went from 1.7% to 4.1% and growth improved 0.1%. That means the 2 year stack went from 0.8% to 3.3%. Plus, it’s notable that growth has troughed at -0.9% this cycle while it troughed at -8.9% in 2015.

The October PCE report supported the narrative that the economy is in a slowdown as there was weakness in income growth, consumption growth, and inflation. That occurred while stocks have continued to hit record highs without correcting. The good news is core durable goods orders growth rebounded on a monthly and 2 year growth stack basis. With easier comps coming in 2020, we should see positive yearly growth soon.