America Is Leading In This Category 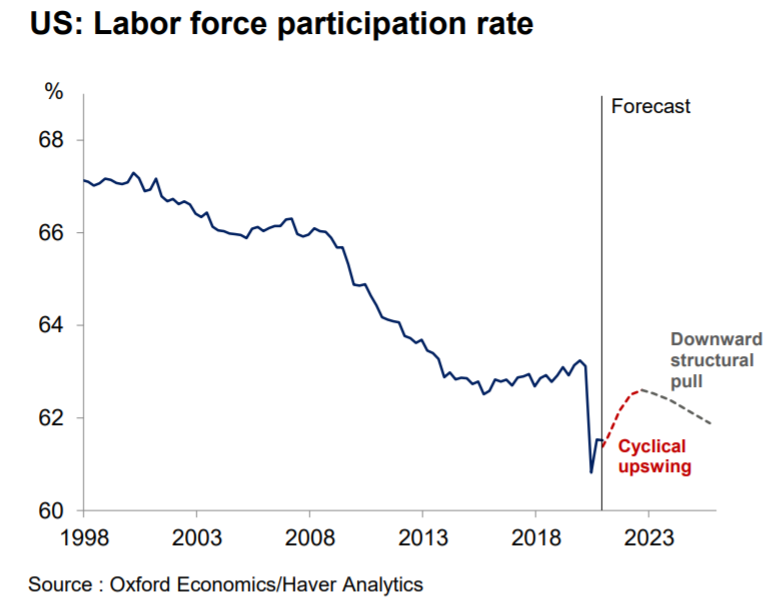 The labor force participation rate fell 0.1% in January to 61.4%. It’s down from 63.3% in February 2020. The chart below shows the contribution of the change in the participation rate by age group. The initial crash in the spring of last year was driven the most by those from 25 to 34. It was basically younger and older workers that took the hit. This makes sense because younger people are more likely to work in low paying jobs which are largely in leisure and hospitality which was crushed by the recession. Also, people 55 years old and older are more at risk from COVID-19.

As you can see, the weakness in the labor force participation rate was maintained the most by older Americans. It’s possible some people who lost their jobs in their 60s will never get back in the workforce. If people retire earlier, that will have a major impact on the overall rate because the population is aging.

About 2 million people left the workforce to retire in 2020. That’s more than double the amount who left in 2019. This could cause a 0.4% drag on the labor force participation rate according to Oxford Economics. They expect the overall rate to rise to 62.4% in Q4 2021 and 62.6% in Q4 2022. However, they expect it to start falling afterwards because of demographics. In the long term, automation should have a big impact on the participation rate.

The American Markit flash PMI for February was very good. The composite index rose 1 tenth to 58.8 which is a 71 month high. That increase was driven by services which were up 0.6 to 58.9 which is also a 71 month high. As you can see from the chart below, the services index in America is vastly outperforming the services indexes in the UK, Japan, and Europe. Their PMIs are all below 50. It helps that America’s vaccination rollout has been among the more successful in the world.

The manufacturing PMI was down 7 tenths to 58.5 which is a 2 month low. Remember, the January industrial production report was very strong. The manufacturing output index was down from 60.5 to 57.7 which is a 4 month low. These are all flash readings which means they are from the first half of the month. However, it’s unlikely that the output index rebounds enough in the 2nd half to avoid a decline.

There was a large jump in inflation as you’d expect if you’re following the breakeven rate. Specifically, input costs for manufacturing and services rose at the steepest rate since at least 2009 (when data started). Selling prices were also up the most on record. It’s interesting to see the service industry already facing higher prices because the labor market isn’t tight yet.

Impact Rising Rates Have On Stocks

The 10 year yield was up about 20 basis points last week which was the biggest weekly increase since last March. Investors everywhere want to know what that means for stocks. It depends on which stocks you’re looking at. Since the market’s sector weighting and valuation changes, the impact rates have is going to vary.

As you can see from the chart below, the z-score of the 10 year yield has a small negative correlation with the subsequent 126 days of S&P 500 returns. On the one hand, a 1.34% 10 year yield is still low. On the other hand, the S&P 500 trades at a forward PE ratio of 22. If the 10 year yield gets above 2%, it might become a problem. Higher inflation is bad for consumer staples and good for banks & energy.

Of course, everyone wants to know how speculative tech stocks will fair in this environment. Secular growth stocks usually aren’t impacted much by rates. We are in a bubble in some of these risky stocks which makes it different from most historic markets. If they are viewed as a long duration play, they will fall as rates rise.

The best potential catalyst to bring down this bubble is more supply. As of February 9th in 2021, there have been about 5 SPAC IPOs per day. That’s a pace of 1,250 SPAC IPOs this year. The average SPAC has been about $300 million which means we are on pace for $375 billion in SPACs this year. This is the supply that will eventually pop the bubble.

This Is A Bad Market For Low-Vol

There is a factor for everything which means virtually every characteristic of stocks can be quantitatively exploited. One factor is low volatility. These boring stocks are dramatically underperforming the market because the flashy speculative stocks have done so well. As you can see from the chart below, on a 250 day trailing basis, the low volatility index is underperforming the S&P 500 by the most since 1999.

This reminds us of the charts last year which showed energy stocks underperforming the market by the most ever. Energy has led the market in 2021. Energy is up 20.65% year to date, while consumer staples are down 4.13% because of higher expected inflation. Let’s see if low vol stocks have a great Q2 versus the overall market. The two most represented sectors in the factor are healthcare and staples.

The labor force participation rate’s decline since the pandemic started has been driven the most by those 55 years old and older. Many of these people simply decided to retire. If someone planned on retiring anyway in the next 1-2 years, they probably figured the pandemic wouldn’t be over by then. The services PMI in America is outperforming the rest of the developed world. The increase in supply will eventually douse the flames of the rally in speculative names. Low vol stocks are underperforming the market by the most since 1999.