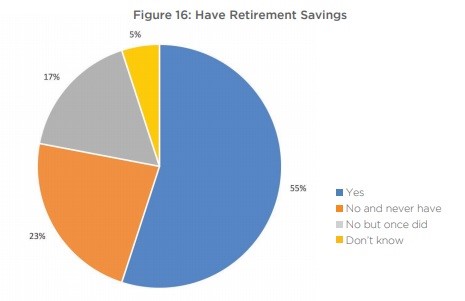 The President of the Minneapolis Fed, Neel Kashkari, took questions on Twitter on April 11th. We asked him a question using the hashtag #AskNeel. We think it’s a wonderful idea for him to take questions because usually only members of the media get to ask Fed members important questions. Monetary policy affects all our lives, so we should all get a chance to ask a question. Some of the most ardent critics of the Fed don’t like when he takes questions because they don’t like his answers. However, we are always trying to learn. We aren’t supporters or opponents of the Fed. We are proponents of learning.

We asked Neel if GDP is a good measurement of the economic prosperity of the middle class. The point of that question is to surface the concept that focusing on GDP growth instead of prosperity isn’t the best idea when setting economic policy. Growing the economy at all costs causes negative externalities.

Reports that include everything, such as GDP, tend to miss out on the intricacies of the economy. You can have high GDP growth, but low wage growth and low productivity growth. To be clear, the Fed has a dual mandate of keeping prices stable and having low unemployment. Strong GDP isn’t one of the Fed’s goals, but it is pivotal to all economic policy. If GDP is focused on less, different policies might be enacted.

Neel had a solid response as he mentioned that GDP just measures the whole economy, but not who is prospering. Since the goal is prosperity, maybe GDP shouldn’t be that important. To be clear, GDP and prosperity are correlated; it’s just that they are far from 100% correlated. Not relying on GDP growth for all policy decisions would be prudent, otherwise if you measure the economy ineffectively, you get ineffective policy.

Baby Boomers Are In Trouble: No Pensions

Consumer spending generates GDP growth in the short run, but if people don’t save enough money, they will be living in poverty during their retirement. Unfortunately, that’s the situation many baby boomers find themselves in. The best way to save for retirement is to start early. Back when baby boomers were in their 20s, the internet didn’t exist. There weren’t low cost ETFs and robo advisors. That means it’s easier to save now than before. On the other hand, pensions are increasingly less prevalent which means people have no choice but to save themselves. In 1979, 84.4% of private sector workers participated in a retirement plan with a pension. In 2000, that fell to 40%. As of 2014, that was only 27.7%.

When Will Boomers Retire?

Let’s look at some of the less than ideal boomer stats on retirement. 29% stated they never plan to retire. 24% said they don’t know when they will retire. 26% stated they will retire at 70 or older. With the rapid advancement of technology, no one knows where they will be working in 5 years, let alone a few decades. However, if you are now working a job that isn’t physically taxing, you can probably retire later in life. It might be better to get a less taxing job that pays less because you will be better off in the end. You will live a healthier life and will be able to work longer. You could end up being happier and wealthier.

Of the respondents who don’t know when they will retire, 33% said they aren’t sure if the savings they have is enough to retire on and 31% plan to work at least part time. Some people find retirement boring which is why they take on a part time job to keep themselves active. Some people need the extra income. People say they will retire later than they actually do. Even though 31% said they would retire at 70 or older, only 7% reported retiring in that age range. That could be a disaster because if you retire earlier than expected, you need more money saved for retirement.

Many baby boomers are in serious trouble because they didn’t save enough money. As you can see form the chart below, only 55% of boomers have retirement savings. Those who don’t will need to rely on social security and pensions if they have one. 23% said they never had retirement savings. That means they never made enough money to have extra to save or they splurged their earnings on unnecessary items.

You can prudently spend some money today because you never know how long your life will be. Plus, you can enjoy the money better when you are younger. However, you need to save money if you have it. Learn from boomers’ mistakes. 17% said they don’t have retirement savings, but once did. They might have spent their savings or borrowed against their IRA because an unexpected expense came up.

As you can see from the chart below, of the boomers with retirement savings, 28% have less than $100,000. That’s not enough to retire on.

The chart below is a complete disaster. It shows the expected source of long term care costs. 46% of boomers say they will rely on Medicare, but Medicare won’t cover their costs.

Only 8% own a long term care insurance policy. 26% expect to rely on one, but they can be expensive and tough to qualify for. It’s scary to see 7% actually say they expect to put long term care on credit cards. That won’t work for the long term.

GDP isn’t all policy makers need to look at to set fiscal and monetary policy. We must focus on the details and look at other metrics. The goal is a higher standard of living, not a higher GDP number. Baby boomers are in terrible shape when it comes to retirement. Those without savings need to rely on social security which doesn’t provide the $55,000 per year the average person ages 65-74 spends. It’s a disaster that such few people have long term care insurance.