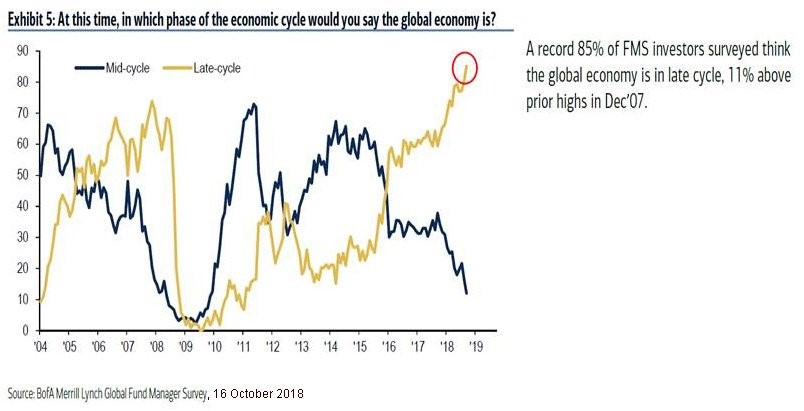 ‘Smart’ money is capital run by professionals in the investment community and ‘dumb’ money is referred to capital invested by people who have a day job that’s not in finance. It’s not the nicest way of putting it, but the moniker makes sense. If you review consumer sentiment surveys, consumers are the most bullish near tops and the most bearish near bottoms. The main problem is recency bias. In everyday life when a trend occurs people react to it. For example, if you eat at a restaurant a few times and keep getting sick, you’ll stop going to it. However, with stock investing negative performance for a few quarters can make stocks a better value. You need to add investments when it’s painful and sell investments when it feels euphoric.

Hedge fund and mutual fund managers have had a bad run which explains the huge influx of capital into low cost ETFs. There’s no debating the results. Regardless of what they show, the Bank of America Merrill Lynch fund manager surveys we will review in this article have been good indicators. Let’s recognize the possibility that an investor can time the cycle correctly, but still underperform because the vehicle used to make the bet fails.

For example, an investor could decide to go long technology stocks if he/she is bullish on economic growth. However, the industrial and financial sectors could outperform tech because of a reason outside of the economy. This shows the importance of refining your investments. It also shows how sometimes an investor can be wrong even when the prediction was correct. That’s why the phrase ‘it’s better to be lucky than good’ is popular. An investor would rather make money than being right. If you obsess about being right, it could lead to stubbornness and losses. The reality is the best investors make mistakes often. It’s important to accept mistakes as part of the process.

The results of this survey are disconcerting because fund managers are the most bearish on global growth since the financial crisis period. The weakness is being led by China which has seen slowing and now must deal with the trade war with America. The American economy has been outperforming because of the fiscal stimulus. Increased earnings spur investment. Even if the money is spent on buybacks, it is still going into shareholders hands who will invest the money elsewhere, growing the economy. The U.S. economy was slowed earlier in this expansion by the sequester where fiscal spending was reigned in. This isn’t an endorsement nor denouncement of fiscal stimulus. We’re just stating its effects.

Some investors and economists criticized the timing of the fiscal stimulus in America because they feared it would create inflation since the labor market is tight. However, more workers have come off the sidelines. Inflation was strong earlier in the year when it faced easy comparisons, but as they get tougher, we think year over year inflation growth will fall. We already saw CPI show weakness in September. The timing of the fiscal stimulus looks good when you see that global economic growth is slowing. If it wasn’t for America, it would be slowing further.

The slowdown foreseen is expected to be a recession. This survey where fund managers are asked if the economy is early, mid, or late cycle has been prescient as the prior peak in the percentage of fund managers who said the economy was late cycle was in December 2007. The global financial crisis occurred in 2008.

Since a global recession could be coming, let’s look at the contributing factors of the past 45 recessions in G7 economies. As you can see, tight monetary policy is by far the leader as over half the recessions were caused by it.

Currently, many view American interest rates as near neutral. It’s tough to see the effects of higher rates because the fiscal stimulus is masking them. 2019 will be telling because the stimulus will wear off and rates will be even higher.

When Will Value Stocks Comeback?

There probably won’t be a credit bubble burst in America because households have deleveraged this cycle. The chart below shows the outstanding non-financial private debt as a percentage of GDP.

The leverage ratio has fallen. The private economy is in better shape than it was early in the cycle. Public debt is the opposite. It’s interesting to see that the deleveraging has helped growth stocks at the expense of value stocks.

Furthering the point about consumers deleveraging, the chart below shows the savings rate is above 6%.

The savings rate is above the rate prior to the past two recessions. The rate may have been higher in the 1980s because interest rates were higher and household net worth was lower. This cycle the wealth effect, which is where consumers spend more because of increased wealth due to rising asset prices, hasn’t caused the savings rate to fall. If there is a recession, consumers won’t pullback much because they already have a high savings rate and relatively low debt.

Given fund mangers’ track record, it’s disconcerting to see that they are bearish on global growth and think the economy is late in the cycle. Usually recessions are caused by tight monetary policy. There isn’t tight monetary policy yet, so if there is a recession next year, it probably won’t be blamed on central banks (although we’re sure some will). The good news is consumers have low debt and private debt altogether is low. The bad news is public debt is high. There haven’t been any negative effects from high U.S. debt yet, but there are examples of debt crises in other nations historically. If there is a recession, private industry might deleverage further which would be bad for value stocks versus growth stocks.