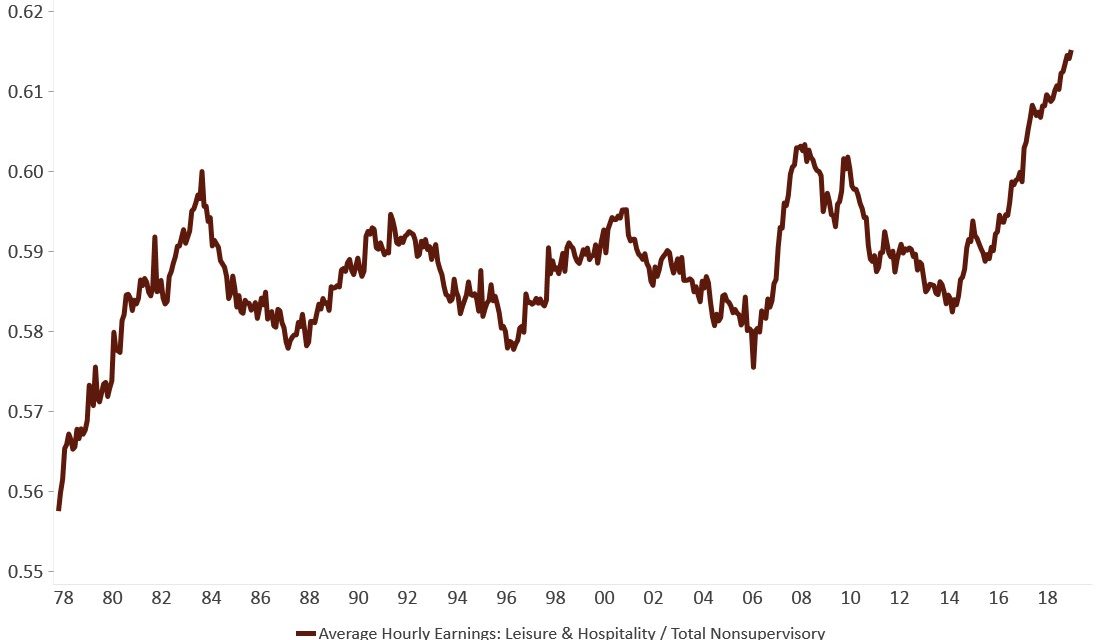 Your outlook on stocks should be based on macroeconomics and valuations. Prices move quicker than the data. Sentiment shifts wildly. An example of how to approach stocks can be explained with narratives. For example, at the end of 2018 when stocks were near their lows you could’ve said that economic growth was weakening and earnings estimates were falling, but GDP growth and earnings growth in 2019 were still expected to be positive. You put a positive spin on the narrative because stocks were falling off a cliff and valuations were cheap. Now that the S&P 500 has rallied about 10% off the Christmas Eve low, the narrative has changed even though the economic picture has stayed mostly the same. Now you can say stocks shouldn’t approach the September high based on collapsing earnings estimates. The situation isn’t dire yet, but it has worsened in the past few months.

It’s still too early to judge the Q4 2018 earnings season, but the results don’t look promising because of the cuts to Q1 2019 estimates. Analysts are basing their cuts on company commentary and guidance.

The average surprise rate is 6.08% as 85% of firms have beaten estimates. Even with great Q4 results, 70% of firms had their Q1 estimates cut by an average of -5.62%. This is a disaster as companies are worried about the slowing global economy and the trade war.  The sales results are similar. Sales growth is 10.42%. The average beat rate is 0.31%. 60% of firms beat sales estimates. It’s important to note that the slower sales and earnings growth in 2019 aren’t the problem. The problem is the rate of change of estimates.

Whenever a great jobs report is released, one of the first questions skeptics ask is if the jobs were of high quality. The good news is the pay of some of the ‘lower quality’ jobs is increasing. As you can see from the chart below, the average hourly earnings from leisure and hospitality jobs as a percentage of total non-supervisory jobs is increasing. This is impressive because non-supervisory wage growth has been accelerating.

Since 2015, the percentage has increased from about 58% to 62%. This industry makes the least per hour on average as workers make $14.18 per hour. It’s good to see the cyclical uptrend for these workers. Usually, low skilled workers see the most volatility in their earnings as they are fired the quickest when the economy weakens. To the perma-bears who claim all the gains are going to the more successful workers, you can see the industry with the lowest pay is doing well.

As we mentioned in a previous article, German industrial output fell 1.9% in November. In order for the index to be positive for Q4, it would need to rise 5.5% in December. This turnaround has occurred once in the past 57 years. When industrial output falls, GDP contracts 80% of the time. A decline in GDP growth would put Germany in a technical recession as Q3 GDP growth was -0.2%. As you can see from the chart below, German industrial production was down 4.7% year over year in November which was the biggest decline since December 2009.

China is the world’s largest car market. Chinese car sales fell 6% to 22.7 million in 2018. That was the first decline in over 20 years. As you can see from the chart below, car sales have been cratering in the past few months as they fell 18% in November.

The trade war and slowing economy appear to be hurting car sales. The hope is incentives and a fiscal stimulus bring back sales growth in 2019. China’s contribution to global GDP growth is expected to fall to 32.4% in 2019; it peaked at 36.3% in 2016.

The December Fed Minutes confirmed that Powell has blinked which means the Fed is no longer hiking rates 3 times in 2019 at any cost. Fed guidance is for 2 hikes in 2019, but the Fed stated its policy path is “less clear.” This means it can easily not hike rates at all in 2019 if the economic data is weak. The Fed’s dovish turn is partially responsible for the 10% rally in the S&P 500 from Christmas Eve. As you can see in the chart below, the Fed funds futures market doesn’t believe the Fed will hike rates twice in 2019.

In the Minutes, the Fed stated, “With an increase in the target range at this meeting, the federal funds rate would be at or close to the lower end of the range of estimates of the longer-run neutral interest rate, and participants expressed that recent developments, including the volatility in financial markets and the increased concerns about global growth, made the appropriate extent and timing of future policy firming less clear than earlier.”

The Fed is on the same page as traders who were selling stocks in December 2018. It sees the land mines that are slowing global growth and the trade war. We just mentioned how Germany and China are seeing weakness. The Fed won’t hurt stocks, but that doesn’t mean stocks can reach new highs because the negative catalysts still need to turn around. There needs to be a trade deal. Bullish investors hope the Chinese stimulus will boost the nation’s growth in 2019.

Q4 2018 earnings reports have been terrible because guidance has been bad. The rate of change in 2019 EPS estimates is negative, but growth is still expected to be in the mid-single digits. The U.S. labor market is strong as even the lowest paying jobs are seeing strong wage growth. Global economic growth is slowing as Germany and China had a bad Q4. The Fed is open to not hiking in 2019. That’s good because the market only thinks there’s a 9.1% chance of a hike this year.