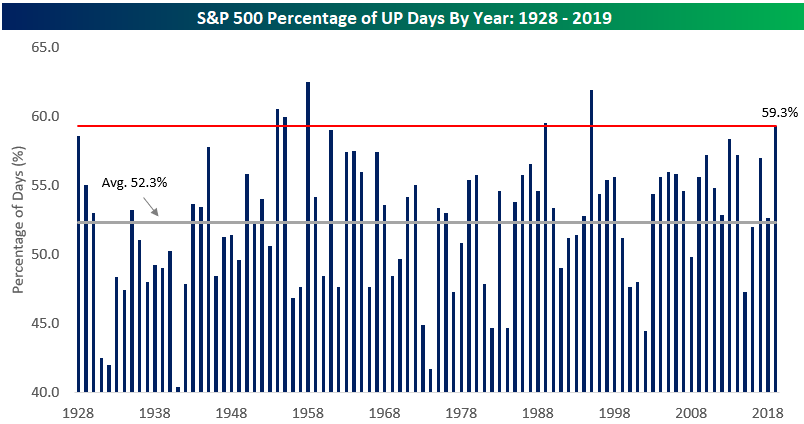 We have a few more stats to share with you about how overbought the U.S. stock market is before we get to the latest economic data. The CNN fear and greed index is above its November high as it is at 93 which is extreme greed. As of December 26th, the Nasdaq was up 11 straight days. It made 10 straight new record highs which is the longest streak since 1997. It only did that twice in the mid to late 1990s. It has done this six times in total. On average, it has increased 15% in the year following streaks of 10 or more record highs. The Nasdaq is up 15% since October 2nd. Apple is up 85.58% year to date (best year in a decade) and the tech sector is up 48.21%.

November existing home sales were limited by supply as sales were 5.35 million which missed estimates for 5.45 million. Monthly growth was -1.7% and yearly growth was only 2.7%. November sales were the 7th best of the year. The median sales price was $271,300 which was a 5.4% increase from the prior year. Inventory fell from 4 months to just 3.7 months in the past year. Unsold inventory has fallen for 5 straight months. 33% of homes were purchased by first time buyers which was 1% increase from the prior year. The South was 42% of the market.

The low end of the housing market is shrinking rapidly as prices rise. There aren’t many cheap first time houses for millennials to move into. That’s not a disaster because people are looking for long term homes instead of cheap starter homes now that they are buying at a later age. Specifically, existing home sales costing less than $100,000 fell 15.9% yearly; these homes are only 9% of the market. Housing priced between $100,000 and $250,000 had their sales fall 3.5% and had 38% share of the market. The other categories all rose.

The new home sales report was modestly disappointing, but still solid just like existing home sales. With the spike in starts and permits, there will be more inventory in the coming months which could increase sales. The October reading was revised from a cycle high of 733,000 to 710,000. Sales increased to 719,000 in November which missed estimates for 735,000. That’s 11,000 below the cycle high which was made in September. It’s 16.9% yearly growth because the comp was very easy.

As you can see from the chart below, the 6 month average of new single family home sales as percentage of the population has been in an upturn all year as the housing market has been powered by lower rates.

CFO confidence being low at times this year has been mostly noise. It didn’t correctly signal stock market weakness, but was supported by the weakness in business investment in Q2 and Q3. Some used it to predict a recession, but clearly that hasn’t happened. CFO confidence won’t gain much fanfare now that it has rebounded because doom and gloom sells. You rarely hear about a once gloomy indicator that’s now more optimistic.

The weighted average estimate for earnings growth in the next year rose from 3.3% in September to 4.5% in December. Capital spending growth expectations went from 0.6% to 4.7%. That’s good for business investment which fell in Q2 and Q3. Revenue growth is expected to be 5.5% which is up from 4.8%. Margins are expected to fall by less. Expected wages and salaries growth rose from 3.9% to 4.4%. The level of optimism on the U.S. economy increased from 62.6% to 66.6% as you can see from the chart below. The level of optimism CFOs have for their own company rose from 67.1% to 75% which is a cycle high.

Despite this improved optimism, 52% of US CFOs think America will be in a recession by Q4 2020 and 76% think there will be a recession by mid-2021. This explains why economic uncertainty is their second biggest concern (biggest concern is attracting and retaining qualified employees). This recession forecast in 12 to 18 months is a bit more aggressive than the typical forecast from economists who call for a recession in 2 to 3 years and then constantly push back that projection by a year when it doesn’t happen.

Firms are preparing for a recession. Ironically, if firms are well equipped to deal with a recession, the economic downturn won’t be as bad. At the same time, lowering business investment hurts the economy now. Specifically, 59% of firms are strengthening their balance sheets, 58% are cutting costs, 29% are increasing liquidity, and 31% are lowering or delaying investment. 54% are stockpiling cash.

Stocks are overbought, especially tech. The November existing and new home sales reports were solid. CFOs were much more optimistic in Q4 2019 than in Q3, but most predict a recession occurring in the next 12-18 months. That can hurt growth now, but should limit the downside of any future economic slowdown.