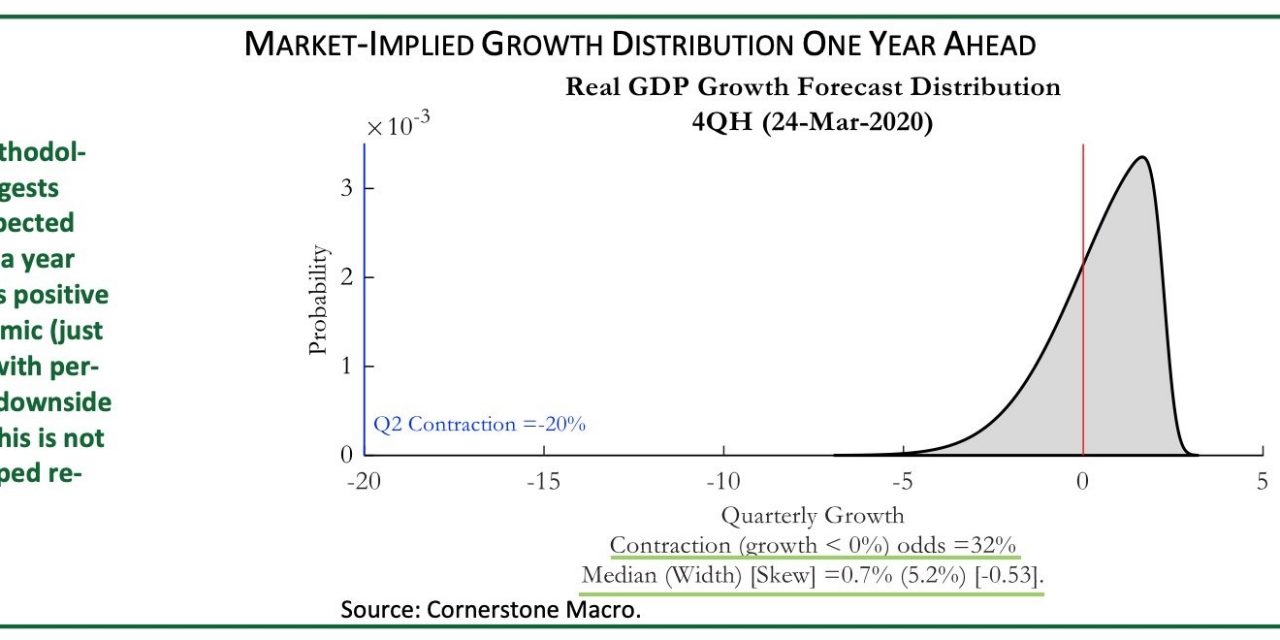 It wasn’t hard to foresee that there would be some sort of fiscal stimulus package passed by the government. People are losing their jobs quickly and need a lifeline. The most interesting data that defines this situation comes from Campbell Soup. The firm stated Campbell soup sales were up 59.3%, Prego pasta sauce sales were up 52.9%, and Goldfish crackers sales were up 22.7%. This sales growth is coming from people hoarding groceries partially out of fear and partially because they are eating out less. In keeping with this point, discount store same store sales growth is 20% higher than department store sales growth according to Redbook. This is by far a record high.

Consumers are in trouble. Not enough people have the savings to deal with losing their jobs. COVID-19 re-teaches us the lesson that we should have 3-6 months of savings and some cash in our investment accounts. Many people are having trouble investing at lower prices because their paychecks are shrinking or being eliminated. Obviously, getting the best prices on stocks isn’t nearly as important as people simply surviving without a job. Recessions aren’t always predicted and surprise many, but this was the sharpest one of all.

As you can see from the chart below, 33% of respondents in a Hedgeye survey had less than $100 to deal with job loss. The unfortunate reality is people have a tough time saving because of income limitations. We won’t be lecturing people for not saving. Instead we will say in the future if you have excess capital, use this as a reminder to put it in a savings account for a rainy day.

The fiscal stimulus for consumers can’t come soon enough. The shutdown has been about a week and affects about 50% of the US population. The final deal agreed on in the early morning on Wednesday was $1,200 per person, $2,400 for married couples, and $500 per child. The amount gets phased out when a person reaches the $75,000 annual income threshold.

While most people are sympathetic to small firms and people earning under $75,000 per year, few feel bad for big firms asking for help. We’re not saying they should or shouldn’t get help. We’re merely pointing out that saying that firms shouldn’t have bought back stock and instead saved for a situation where their business shut down for a few months has legitimacy.

According to @SkeleCap on Twitter, the cumulative free cash flow of American Airlines is $-10.6 billion. If the firm had never spent money on capex and saved 100% of 2019 cash flow from operations, it would have $32.7 billion, slightly below its operational expense per year burn rate ($42 billion). Firms prepare for various scenarios, but not for a situation where they don’t have a business for a few months. Maybe they should from now on, and maybe they will as a lesson from this experience, which could impact accordingly the rate of economic growth and/or shareholder returns in the future. If individuals should have 3-6 months of emergency funds (at least), why shouldn’t companies?

Cornerstone Macro did great analysis on the market’s expectation for future GDP growth. The first half of 2020 is a lost cause outside of the first 2 months of the year. Investors are trying to price in when the recovery will occur and how strong it will be. That’s what makes this analysis interesting. Cornerstone Macro has calculated that based on the COVID-19 shock (using the slope of the curve and financial conditions), GDP growth is expected to be -2.3% 6 months in the future. There are 83% odds of negative growth. The chart below shows growth in 1 year is expected to be 0.7% with a 32% chance of negative growth.

The betting market is a great way to figure out what is expected for COVID-19 because we don’t have a consensus range of estimates for the number of new cases. According to the betting odds, there is an 80% chance between 500,000 and 1 million cases will be confirmed globally by March 31st. There is a 63% chance of there being more than 1 million cases in America by April 15th. The good news is the situation is getting under control in in Italy. On the other hand, NYC daily new cases are still in an uptrend after the spike on March 25th. New York is the hot spot of America.

Governor Cuomo has claimed COVID-19 shutdowns could last as long as 9 months and up to 80% of New Yorkers could get the virus. These forecasts differ from the situation in China, Japan, and South Korea. They also differ from the recent growth rates in Italy. Chinese economic activity is rebounding. As you can see from the chart below, subway passengers, road congestion, share of migrant workers returned, and coal consumption have all increased sharply from their troughs. They are still below 2019 levels, but normalization is underway.

People aren’t prepared to deal with losing their jobs. That’s why the government passed a bill to give people $1,200 in relief. Many large businesses were also not prepared. Only the most profitable corporations can deal with losing 100% of business for months. Firms don’t plan for such events. Markets apparently expect economic weakness 1 year from now. The number of new cases hasn’t stopped increasing in NYC yet. The Chinese economy is in the process of normalization.