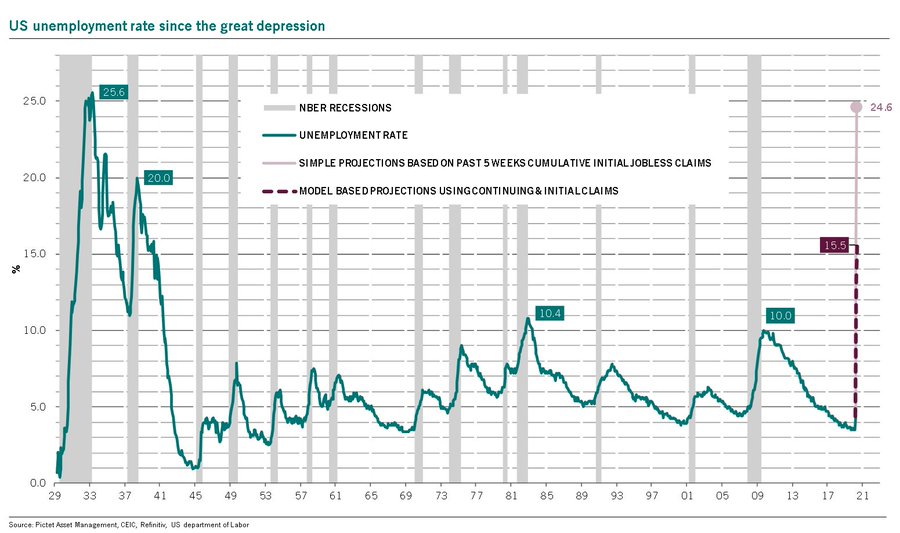 Thursday brought us yet another terrible jobless claims reading. The trend of declines in initial claims increased to 3 weeks, but that’s out of necessity. It was simply impossible for claims to stay at 6 million every week. That’s why when we said initial claims may have peaked in the end of March, we weren’t expressing an optimistic opinion. It was just math. People who were incredibly bearish or didn’t do the math were the only ones to disagree with such an assertion.

As you can see from the chart below, the 5 week cumulative claims of above 26 million puts the unemployment rate at 24.6% which is just 1% below the peak in the Great Depression. Even with the recent decline in initial claims we are near the record high. This supports the point that initial claims had to fall. The chart also shows that the April labor report will show the unemployment rate is at 15.5%.

Last week’s report had claims revised down slightly from 5.245 million to 5.237 million. It’s a positive we finally aren’t seeing sharp upward revisions. The bad news is claims were worse than estimates as economists weren’t too bearish again. There were 4.427 million initial claims in the week of April 18th which was above estimates for 4.25 million. This was the 3rd week in a row claims fell. Continuing claims increased from 11.912 million to 15.976 million in the week of April 4th. That’s way above the previous cycle high of 6.635 million. We have almost double the claims as the last recession which means we will have around double the unemployment rate (that would be 20%).

As we mentioned in an article a couple weeks ago, investors want firms to pay back debt, but they are actually issuing more debt. Most firms don’t have excess cash to pay higher dividends, buyback stock, or payback debt. We’re going in reverse. Corporate debt was a concern to some before this recession. If you thought it was a concern 8 weeks ago, you will be much more concerned over the next few months. We also discussed the trend in companies suspending their buybacks, not giving guidance, and taking out money from their revolver. The next trend appears to be paying down revolvers via issued debt. The better the financial conditions, the more likely firms are to do this. As you can see from the chart below, the 10 day rolling sum of investment grade issuance has increased to about $7 billion. The Fed’s buying of corporate debt certainly helps this market.

Tech Is One Fire

Tech stocks are doing really well and for good reason as they do well when people need to stay home. Work from home, online shopping, social media, and digital revolution (think SAAS) stocks all do better than the overall market in this environment. It’s still unbelievable how well they have done. The ratio of the Nasdaq 100 to the S&P 500 is near the tech bubble peak. The ratio has had an RSI above 70, which means overbought, for 16 of the past 17 weeks. The record was set at 17 for 17 at the tech bubble peak.

The healthcare sector has also done well. That’s for 2 reasons. Firstly, you have the drug companies working on vaccines and cures for COVID-19 (such as J&J and Gilead). Secondly, you have the health insurance companies that are benefiting from this situation because less people are getting elective surgeries. In March, surgery volume was down 26% from last year. That’s how United Health was able to maintain its full year guidance in the midst of a pandemic.

This brings us to the chart above which shows the healthcare and tech sector’s combined percentage of the ACWI index. It is 42% of the index which is 3% off the record high. If these sectors are gaining, there obviously needs to be a loser. The 2 losers are the financials and energy.

The financials are being hurt by the inability of people to pay back loans. The Fed is the ultimate backstop in this situation. Energy is being hurt by the decline in driving as people aren’t leaving their houses. A sign of a potential peak in the negative sentiment on oil is the article titled “Crude Oil Latest News: Why -$100 a Barrel Isn’t a Crazy Bet Now.” Besides temporary negative prices because of futures market speculative blowups, negative prices aren’t sustainable. We went from never having negative prices to someone calling for -$100 per barrel. That’s similar to someone calling for a -10% 10 year treasury yield if the yield goes negative for a couple days. One key difference is negative yields are much more sustainable than negative oil prices.

It’s no surprise that with negative oil prices has come a record high in high yield energy spreads seen in the chart below. The spot prices don’t matter much for hedged companies, but many frackers can’t make money with oil below $40, so we are still in a problematic spot.

Looking at the regions most effected by this, 16.4% of Wyoming’s output is from energy and mining. The next 2 are Alaska and Oklahoma which are 15.3% and 11.7%. Even though Texas is a huge oil state, it only gets 7.8% of its output from energy and mining because the state is diversified. The country as a whole gets 1% of its output from the sector.

The unemployment rate is probably above 20%. This recession might be deeper than the Great Depression. It won’t be a depression though because the weakness probably won’t last due to government and Fed intervention. Companies are issuing debt to payback their revolvers for added financial flexibility. The tech and healthcare sectors have been on a roll, while financials and energy have been left for dead. We can’t think of worse sentiment than calling for -$100 per barrel oil. Energy high yield spreads are at a record high.