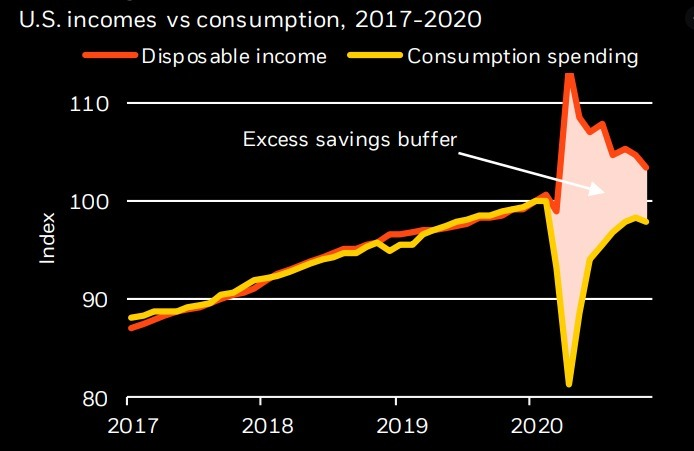 2021 is going to be an amazing year for the consumer. The leisure and hospitality industry might have a better summer than it did in 2019 because of all the pent up demand for travel. Low and middle class consumers will get transfer payments in the $1.9 trillion stimulus. Then, they will see a sharp improvement in hiring. The increase in demand the restaurant and travel industries receive will cause them to hire more people. That should recoup a lot of the job losses the bottom 50% saw in 2020. The upper class will simply spend their cash hoard. Remember, we mentioned in a previous article that the top quintile on average has saved $50,000 since the pandemic started. They can still work from home, but their spending options have been limited.

The January retail sales report was a blowout. Economists keep getting surprised by the fact that the poor and middle class spend more when they are given cash. This basic common sense is lost on them. Specifically, monthly headline retail sales growth rose from -1% to 5.3% which beat the consensus of 1.1% and the highest estimate of 2.4%. Trump’s last minute delay, which lasted a few days, shifted almost all the stimulus related spending into January. February should be good too because the vaccines are allowing the economy to partially reopen. Control group monthly sales growth rose from -2% to 6.1% which beat estimates for 0.9% and the highest estimate which was 3.0%. This was an expected good report that economists badly whiffed on. That’s why the stock market didn’t react to it at all. Goldman raised its Q1 GDP growth estimate from 5% to 6%, while investors yawned. They already priced this in weeks ago. It’s worth noting that 5.7 million Californians will receive $600 stimulus checks. That should modestly help the February retail sales report.

The only two times the retail sales report beat estimates by more than this were in June 2020 and after September 2001. Total yearly retail sales growth rose from 2.5% to 7.4%. That’s the highest growth since September 2011. The table above breaks down the monthly results. As you can see, a lot of the old spending trends remained, but some new trends perked up. Electronics & appliances spending growth was 14.67% and furniture spending growth was 11.97%. However, their yearly spending growth fell during the month according to card data.

Keep in mind, the first half of January and the second half were dramatically different. In the first half, it was uncertain how quickly the vaccines would be given out and what their impact would be on hospitalizations. In the second half, it became very clear the vaccines were being distributed rapidly and that they were causing hospitalizations to fall dramatically. Consumers are now hotly anticipating a return to normalcy within a couple months. 17.3% of Americans have been vaccinated. Extreme weather is slowing down the vaccination rollout, but that should stop within a few days. On the other hand, bars & restaurants had monthly growth of 6.93% which beat the average. That’s a new trend which is going to accelerate rapidly this spring. NY already allows for 25% occupancy in restaurants again.

Millennials and Gen Z have higher spending growth than older generations for two reasons. The first is that the virus doesn’t affect young people as much as older people. Young people can still spread the virus so they should be cautious. However, realistically many aren’t as cautious as older people. The second reason is younger people have less wealth than older people. Those in the lower income class have less discretionary spending to cut, while the upper income class has much to cut. Typically, retired people, who have money saved up, spend a lot on travel. That isn’t back yet. As you can see from the chart below, Millennials & Gen Z are spending 3.1% more via Chase cards than last year.

Obviously, much of Gen Z isn’t old enough to get a credit card. This just includes those who are old enough. On the other hand, Boomer spending growth is -11.5%. We are weeks away from seeing that go positive. Obviously, the comps will be very easy. More important, spending on travel is about to bounce back. Hospitalizations have fallen by more than half since the peak in January.

We are extremely confident there will be a massive boost in spending sometime starting this spring or summer because there is a large savings glut and because of the fiscal stimulus. As you can see from the chart below, the difference between disposable incomes and consumption is very large. We just need an “all clear” sign to allow the pent up demand to work its way through the economy.

Oil About To Be In A Deficit

Consumer spending is set to increase this summer. The January retail sales report was very good. The February report should be decent as well. We expect jobless claims to start falling sharply this spring which should really help the consumer. Younger people have had less of a spending decline. There is a massive consumer surplus that will be unleashed later this year largely on travel, entertainment, and restaurants. The large oil glut is almost gone. Prices might increase rapidly later this year when travel rebounds.