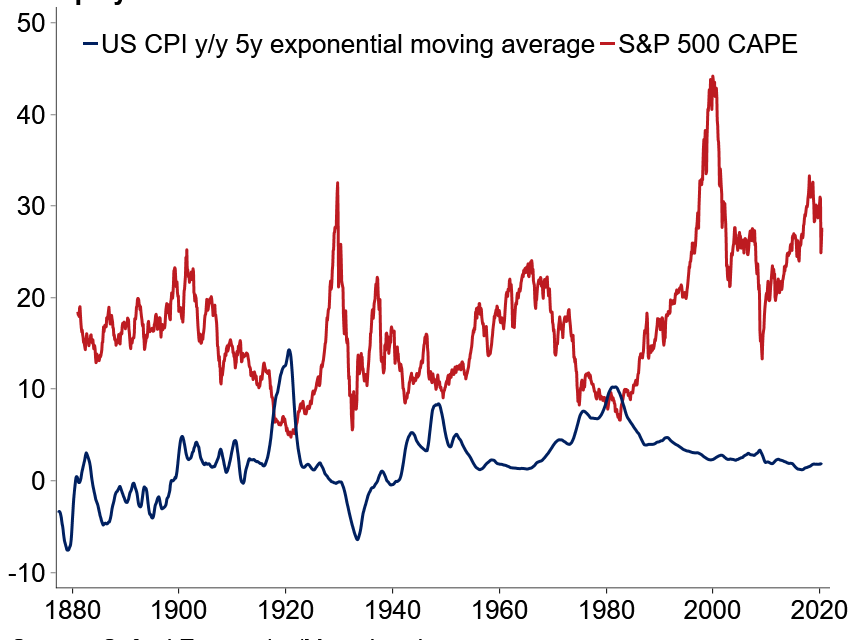 We are always looking at valuations because that’s the backbone of investing. With extreme market volatility, the only way to stay sane is to have an understanding of what a business is worth. If you judge what a stock is worth based on near term performance, you will be very confused. Just because we saw extreme volatility on Thursday and high correlations doesn’t mean valuation doesn’t matter. If you’re able to find the best companies when the herd is selling stocks, your performance will be great. If you make a habit of buying expensive stocks, you will underperform. This not to say buying growth stocks with high multiples is a bad idea. That’s far from the truth. It’s also a mistake to believe growth companies aren’t impacted by valuations. Some cases of extreme speculation mean growth companies are detached from proper valuations, but there are opportunities to be had in other names.

The pendulum has swung to the point where the consensus is stocks are expensive. That’s for good reason as the S&P 500 has a high multiple based on 2020 earnings. Even based on uncertain 2021 estimates, the multiple is above average. As you can see from the chart above, the 10 year CAPE is also high. However, there is a case that stocks are a buy. We aren’t giving advice. We’re expressing a viewpoint that’s not common, in order to provide a counterpoint. The chart shows the 5 year exponential moving average of US CPI.

As we will explain later in this article, CPI was very low in May. It has been low for years and its volatility has been non-existent. That’s partially why the US 10 year yield is at 70 basis points. Even though corporate debt to GDP is high, the debt is cheaper to service because of such low rates. It helps a lot that financial conditions have cooled off and credit spreads have tightened. The Chicago Fed National financial conditions index fell from -7 basis points in early April to -58 basis points in early June. The Bank of America options adjusted spread fell from a peak of 10.87% in March to 6.4% on June 11th.

The Earnings Scout shows that earnings estimates haven’t been falling by as much in the past few weeks which is bullish for stocks. From June 1st to June 12th, the consensus for Q2 S&P 500 EPS growth fell from -44.43% to -45.2%. Growth can’t get much worse, so there’s not much room to fall. Q3 estimates fell even less as growth went from -27.22% to -27.93%. This absolute rate isn’t as bad, yet estimates didn’t fall much which is very bullish. Full year 2021 EPS estimates have fallen from $185 to $159 since the start of the year. With the current price, the S&P 500 has a 19 multiple. Even the 6% decline on Thursday doesn’t make stocks cheap on a forward basis. Growth is expected to be 28.3% instead of 9.8% because of the easier comps. Don’t get fooled into thinking that growth is impossible just because it seems high.

The chart above shows Fidelity’s depiction of the declines in EPS growth. As you can see, the S&P 500 is down 12%, while the 2021 estimate fell 17% and the 2022 estimate fell 14%. Estimates for 2022 are highly uncertain. Usually estimates fall, but during recessions, future estimates are actually too bearish because analysts just extend trends. The economy is cyclical which is why that doesn’t work.

Inflation is barely existent which is why the Fed is in no rush to hike rates. If inflation was elevated, the Fed would likely still keep rates low, but it would be a tough choice. ZIRP is a very easy choice. Headline CPI in May was 0.1% and core CPI was 1.2%. The chart below shows core CPI is the lowest since early 2011 and headline CPI is the lowest since early 2015 which was after oil prices crashed.

The housing market is on fire as it has recouped the momentum it had before the recession started. Usually, the areas that caused the prior recession are strong in the next one. That’s like how technology was strong following the last recession (after causing the 2001 recession). The demand for housing didn’t go away. It was just delayed. Low rates also help affordability. The 30 year mortgage rate hit a record low of 3.15% in late May. It’s now at 3.21%. In the week of June 5th, refinance applications were up 11% weekly following a 9% decline. The charts on the right show how many people can refinance by looking at mortgage rates’ 3 year rolling minimum and maximum.

The housing market isn’t just improving like the rest of the economy. It’s on fire. According to Redfin, demand is up 25% from pre-pandemic levels. Sales prices were up 3.1% and ask prices were up 9.9%. Prices are falling partially because of a lack of supply as new listings were down 15%. The MBA purchase index was up 5% weekly after rising 5%. The unadjusted growth rate was 13% yearly. The chart below shows applications are near their prior peak.

Valuations are high if you look at 2021 earnings, but stocks benefit from low inflation and the decline in inflation volatility. They also like the slower decline in earnings estimates. CPI was near zero as you’d expect with demand declining so much. That differs from consumers who stated they expect higher inflation in the University of Magician sentiment report. Their 1 year inflation expectation is 3% and their 5 year expectation is 2.6%. Most of the economy is improving, but still weak on an absolute basis. The housing market is actually strong. It’s doing really well based on the MBA applications report and the data from Redfin. It’s being helped by record low rates.