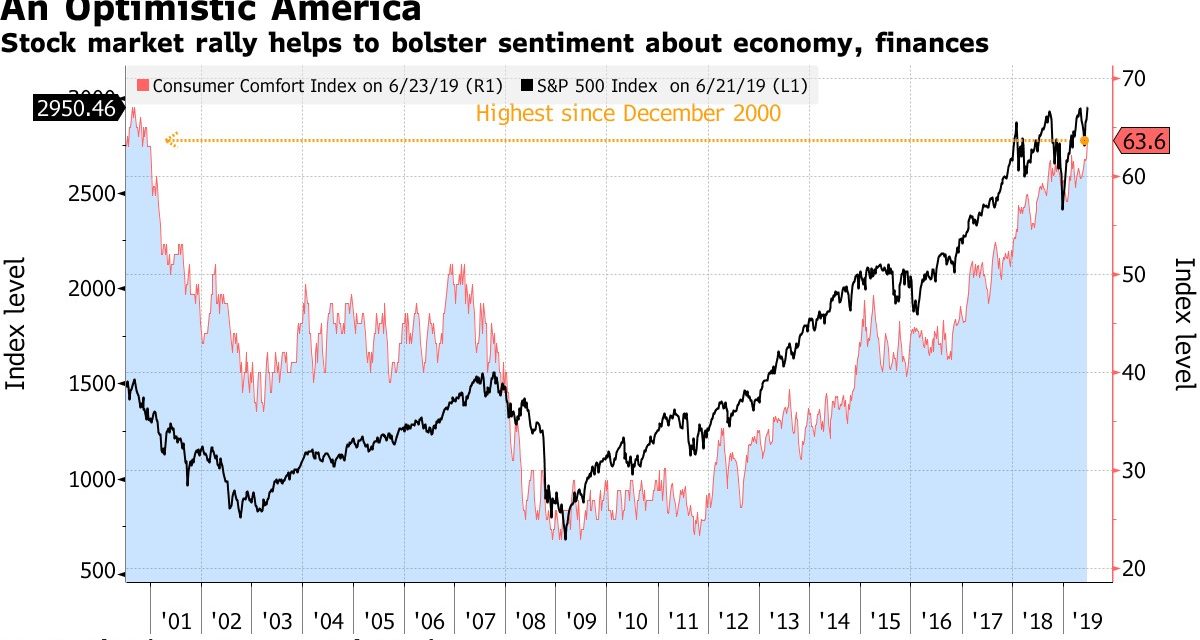 The media and social media discussed the decline in the Conference Board consumer confidence index endlessly because negative news draws attention and ad revenue. We like to look at all the data instead of just reviewing the negative reports. That makes the situation more complicated which generates less viewership, but that’s reality. As a reminder, sensationalism doesn’t produce long-term investment returns, reality does.

The only time all the economic reports lined up was in the depths of the financial crisis. The fact that the Bloomberg Consumer Comfort index hit its highest level since December 2000, ruins the narrative that the consumer is extremely worried about tariffs, the labor market, and the business environment. Data doesn’t run on narratives. No one answering the questions in this survey based their opinion on a narrative some investors have.

It’s not a big surprise to see such high confidence because as we noted in a previous article, consumer confidence follows the stock market. You can see that relationship in the chart below.

There also might have been a political bent to this reading as sentiment among Democrats was the highest since 2001. Maybe some Democrats are watching the presidential primary and are thinking the future will look better. On the one hand, investors shouldn’t care about people’s political views. On the other hand, if Democrats are now optimistic, they might spend more money even though the next president won’t be sworn in until early 2021.

Specifically, the confidence index was up 1.8 points to 63.6 in the week ending June 23rd. The index for people earning less than $50,000 increased to the highest level since at least 2010. That’s the exact opposite of what the Conference Board survey showed. In that index, consumers making under $15,000 had the lowest confidence since 2016. There was an 18 year high in confidence for singles, women, those in the West, and people with a college degree. It’s possible the confidence index was helped by the trade deal with Mexico and solid real wage growth.

Investor confidence wasn’t that high in the latest AAII individual investor survey even though stocks hit a record high last week. Bullish sentiment is at 29.59. It was about double at the peak in January 2018.

Home buyers are in good shape as interest rates are cratering and home price growth is weakening. As you can see from the chart below, the national Case-Shiller home price index’s yearly growth was 3.5% in April. That’s the lowest growth rate since September 2012.

The 20 city index had yearly price growth of 2.5% on a non-seasonally adjusted basis. That’s down from 2.6% growth in March. That’s the lowest growth rate since September 2012 as well.

Now let’s look at some of the cities in this index. Shockingly, the city with the worst price growth was Seattle as it was at 0%. That’s down from the recent peak of 13.6% in May 2018. San Diego was the 2nd worst city as its yearly growth was 0.8%. The cities with the highest price growth are seeing the biggest declines in growth. Las Vegas had the highest yearly growth rate, but it’s headed in the same direction as Seattle. It’s just a few months behind the curve. Its growth was 7.1% which is down from its recent peak of 13.8% in August 2018.

This week we’ve seen weakness in new home sales, differing data on home price growth from FHFA and Case-Shiller, and solid results from the pending home sales report. The May pending home sales index was up 1.1% to 105.4. That beat estimates for 0.6% growth and April’s monthly decline of 1.5%. On the one hand, yearly growth was -0.7%. On the other hand, this was the highest reading since last July. The chart below shows the data from each region.

If the 5 regional Fed manufacturing reports are accurate, the ISM PMI will fall to about 50 in June from 52.1. The last report was from the Kansas City Fed which had its index fall from 4 to 0 which missed estimates for 3. It’s notable that flooding in Missouri hurt some firms. Production fell from 2 to -3, volume of shipments fell from -2 to -7, and volume of new orders were up from 4 to 5. Unlike some other regional Fed readings, this expectations index didn’t have a big decline as it fell from 12 to 11.

4 of the 11 quotes in this survey mentioned tariffs or China. One firm stated, “The most difficult situation for our company is that our exports to China have dramatically dropped due to new Chinese government regulations, tariffs now placed on our products by China and the poor consumer economy in China.”

Is consumer confidence fine? The Bloomberg Consumer Comfort index says consumers are fantastic and the Conference Board index says they are doing okay, but less confident than earlier in the year. The housing market saw weak price growth in April, especially in Seattle according to the Case-Shiller report. However, the FHFA report actually showed yearly national price growth increased from 5% to 5.2%. The MBA applications report showed strong yearly purchase applications growth. The regional Fed manufacturing reports have been weak in June. The jobless claims report continues to show the labor market is strong.