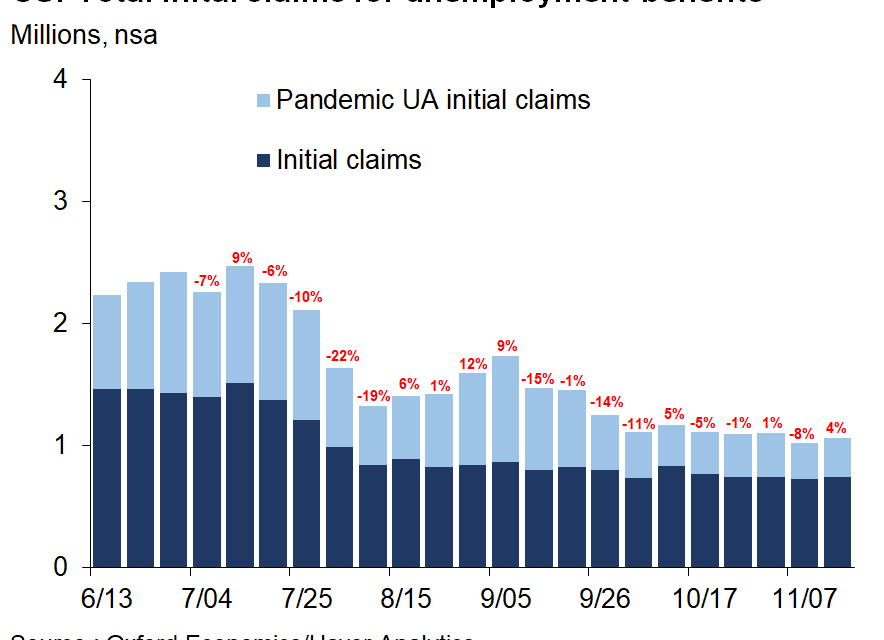 Last week’s jobless claims report was good, but this one from the week of November 14th wasn’t. Last week’s reading was slightly revised higher, but it was still strong. This week’s report is in tune with the thesis that the economic restrictions and individual behavior caused by the virus are hurting the labor market. It’s a hard thesis to avoid as all the COVID-19 readings are worse than in the summer. The recovery didn’t reverse in the summer, but that’s irrelevant when hospitalizations and deaths are higher now.

The market is looking past the winter because the vaccines make the 2nd half of 2021 look good. There will be 40 million doses of Moderna and Pfizer’s vaccines (for 20 million people: 2 doses each) combined by the end of the year if they are approved. Pfizer submitted its application to the FDA for emergency use of its vaccine on Friday. Moderna will apply in a few days. Millions of vaccines have already been produced and are waiting for approval and distribution. BioNTech’s CEO stated their goal is to supply several hundred million doses in the first 4-5 months of 2021.

The market may be looking to the spring and the summer, but in real life there will be massive economic consequences in the next few weeks. This likely slowdown should trough as the vaccines are given out en masse sometime in late winter. In the meantime, restrictions are coming. On Thursday, California announced a curfew for non-essential workers. Gatherings must shutdown from 10PM to 5AM. That will cut Thanksgiving gatherings short. The CDC is strongly warning against traveling for Thanksgiving. California’s curfew applies to 94% of the state’s population. This won’t be the only state instituting restrictive measures starting this month. Rural areas are much less likely to issue restrictions, but they might be forced to as the virus spreads.

Seasonally adjusted initial jobless claims rose from 711,000 to 742,000. That was way above the consensus of 710,000 and the highest estimate which was 725,000. Last week’s report showed a 46,000 decline (revised 2,000 higher) and this week’s report showed a 31,000 increase. If you combine the two it’s like a slight decline. Either the labor market got much worse or the seasonal adjustment was a factor. We think it’s a combination of the two.

Non-seasonally adjusted claims only rose 18,344 this week to 743,460. That’s much less than the seasonally adjusted spike. However, unadjusted claims only fell 18,788 last week. That means the increase this week completely canceled out the decrease last week. PUAs rose 24,000 to 320,000. As per usual, this data is volatile. Louisiana had a 30,000 increase in PUAs to 40,000 which is clearly incorrect. PUAs and unadjusted claims combined were up 4% after falling 8% as the chart above shows. We can call it a slight improvement over two weeks or an inflection point which signals a slowdown is starting.

Continued claims fell from 6.801 million to 6.372 million in the week of November 7th. Finally, they are below the peak in the last recession which was the previous record high before this year’s data. The 429,000 decline was 7,000 more than the last report. If that decline were to continue, this reading would be normal within a few weeks. However, a slowdown is coming, so we won’t see that. Just as this metric has gotten to where it started the last expansion at, the economy is starting to slow as economic restrictions are increasing and people are staying home more often.

Keep in mind, the normal data isn’t the only labor market measurement. When you add in pandemic benefits, the labor market is way worse than where it started the last expansion. In the week of October 31st, PEUCs increased 233,458 as you can see from the chart above. Extended benefits were up 78,441. The overall number of people on some benefits programs fell 841,000. There are now 13 million people on pandemic benefits.

Pandemic benefits expire on December 26th. It’s estimated that 12 million people are at risk of losing their benefits. The government must do something to prevent these people from losing everything. Generally, when the government is forced into action, it does something such as in the spring. Let’s see if the government figures something out. On Thursday, the Senate majority leader agreed to resume negotiations with the Democrats over a new COVID-19 relief bill. The time for action is now.

This data is from mid to late October. Imagine how bad it will be when benefits stop being distributed. Plus, we might see a steady increase in initial jobless claims if the slowdown picks up momentum. Lockdowns guarantee an economic slowdown. When deaths rapidly increase like they are now and hospitals become overrun like many are, more lockdowns become more likely. Lately we have been seeing “lockdown light” which is recommendations for action, but not decrees. Legislation/orders will get stronger if the spread doesn’t abate. The NYC Mayor already said it’s only a matter of time before the state shuts down indoor dining and gyms. That response came after parents complained about schools being shut; they state schools are safer than restaurants, bars, and gyms.

This could just be a one off weak jobless claims report, but you have to think a slowdown is coming with economic restrictions being implemented and mobility falling. COVID-19 is raging worse than in the summer. The most important thing for the government to do is to extend the pandemic benefits through when the vaccines are fully distributed this spring. Over 14 million people might not be able to pay their rent. The economy will have a rough winter before improving markedly in the 2nd half.