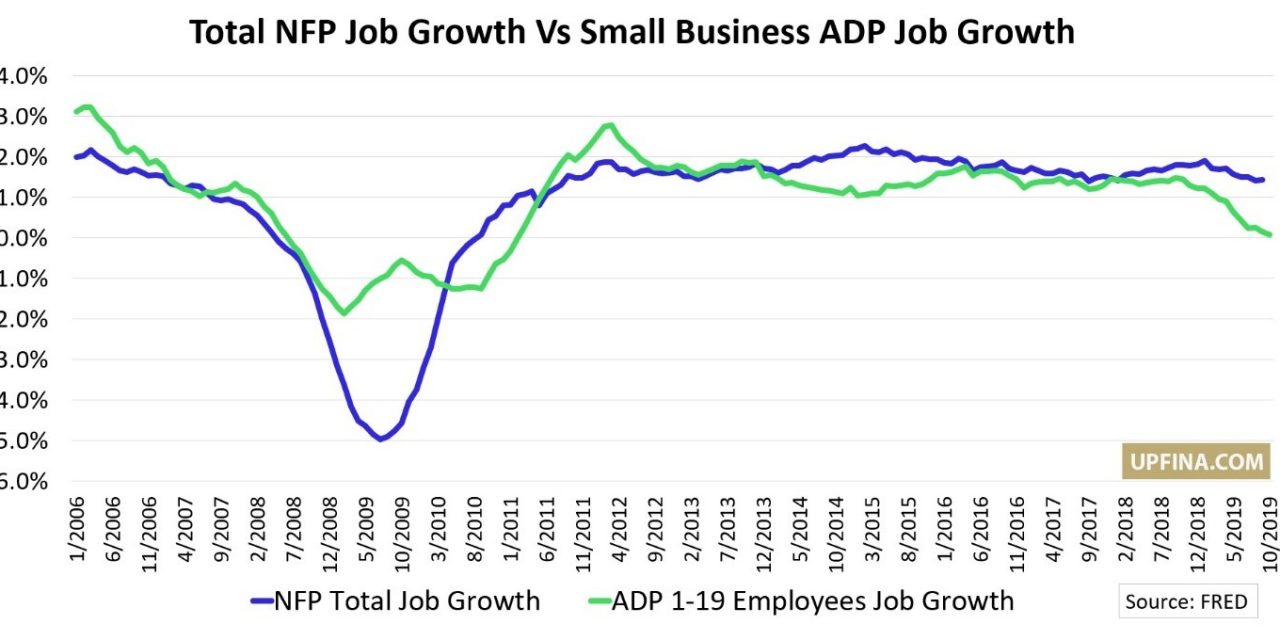 The ADP private sector jobs report was a mixed bag. On the negative side, the September report was revised from showing 135,000 jobs created to 93,000. We know the initial BLS reading was 114,000, but that’s subject to a revision. As for now, the ADP report went from optimistic to pessimistic. The October report showed 125,000 jobs created which met estimates. The consensus is for 90,000 private sector jobs created in the October NFP report, making this ADP total solid.

This was the 5th decline in very small business jobs in 6 months. Before May 2019, there were 32 straight months of job creation. There was only 1 other decline in 64 months. The latest weakness is in line with the decline in corporate profit margins, but not with the relatively positive NFIB small business confidence index.

In the ADP report, midsized firms added 64,000 jobs and large firms added 44,000 jobs. According to the Atlanta Fed, for the unemployment rate to stay the same and keep up with population growth, there needs to be 109,000 jobs added per month. The ADP report beat that threshold and the NFP report is expected to miss it. The goods producing sector lost 13,000 jobs and the service providing sector added 138,000 jobs. The manufacturing sector losing 4,000 jobs makes sense because manufacturing is in a slowdown. Once again, education and healthcare added the most jobs at 41,000. Professional and business was relatively weak as it only added 18,000 jobs.

The Fed cut rates for the 3rd straight time in October, but guided for no more cuts in the intermediate term. Powell stated, the current Fed funds rate will stay the same as long as “the outlook remains broadly in keeping with our expectations.” He also said monetary policy is “in a good place.” Since the market was already expecting the Fed to not cut rates in December, this wasn’t a shock. Stocks rallied during Powell’s presser which is a rarity.

The image below shows the changes to the October Fed statement. The key change was going from saying the Fed will, “act appropriate to sustain the expansion” to stating “The Committee will continue to monitor the implications of incoming information for the economic outlook as it assesses the appropriate path of the target range for the federal funds rate.” That’s a hawkish move as the Fed plans to pause rate cuts.

There is an 18.5% chance of a cut in December and only a 60.9% chance of a cut by November 2020. The cuts might be done for a while. In the eyes of the market, by pausing rate cuts, the Fed has successfully executed the much maligned “mid-cycle adjustment.” While cuts matter more when they are closer to the zero bound because the Fed has less room to deal with a recession, any number of cuts that doesn’t lead to a recession is a mid-cycle adjustment. The last 2 mid-cycle adjustments were three 25 basis point cuts in 1995-1996 and 1998. As more data comes in, we will see if this is wishful thinking by the market.

The Fed got the market to accept the pause; now it needs the economy to improve. Powell stated, “the baseline outlook remains favorable” for the economy. It’s interesting because the economy is still in a slowdown. Nothing changed to make the Fed pause rate cuts. On the other hand, why go near the zero bound with low risk of a recession and phase 1 of the trade deal with China near completion? As you can see from the chart below, based on 29 macro and market factors, there is an 11% chance of a recession.

GDP Growth Not As Bad As Feared

The two biggest stories of the GDP report are shown in the chart below.

Real consumption growth fell from 4.6% to 2.9%, but beat estimates for 2.6%. The consumer was a strong point as it helped GDP by 1.93%. Without the consumer, there would be no growth. Durables spending growth was 7.6% which was down from 13% growth, but still strong. Non-residential fixed investment growth was -3%. As you can see, it had a small negative impact of -0.4% on GDP growth because it’s 14.3% of real GDP, while the consumer is 69.8%. Spending on equipment fell 3.8% and spending on structures fell 15.3% which was mostly oil driven.

The table below shows all the contributing factors to this GDP report.

Residential investment growth was 5.1%. This helped GDP 18 basis points. That was its first positive impact since Q4 2017. Government spending was up 2% and helped GDP growth by 0.35%. Inventories and net exports had small impacts on this report as they hurt growth by 5 and 8 basis points.

The October ADP report was solid except for the decline in very small business employment. The Fed cut rates, but signaled for a pause in rate cuts. There is no signal economic growth is picking up, but there’s also no signal of a recession. If there is a recession, the Fed will cut rates further, but it would obviously be too late to avoid said recession. Stocks finally didn’t fall during Powell’s presser. Q3 GDP growth wasn’t as bad as expected, mostly because of the strong consumer. It would be very bad news if the NY Fed Nowcast is as accurate about Q4 GDP growth as it was about Q3 growth because it is currently predicting 0.92% Q4 growth.